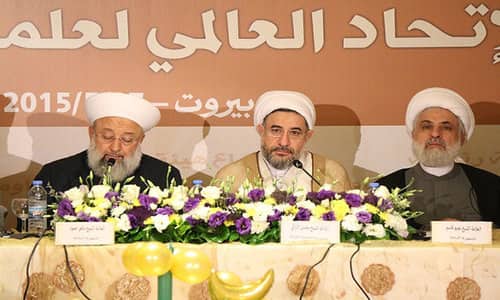 By PNW Staff November 14, 2017
Share this article:
A large group of Islamic leaders recently held a conference that the liberal press has quietly buried. Its theme was the total destruction of Israel. The city of Beirut, Lebanon played host to the second meeting of a group that calls itself the International Union of Resistance Scholars.
The cabal is comprised of approximately 700 Islamic scholars hailing from 80 countries, not just in the Middle East, but also Africa and South-East Asia and their stated goal is to wipe Israel off the map forever.
Despite their differences, both Shia and Sunni attended, including the head of Hezbollah, Hassan Nasrallah. The Supreme Leader of Iran, Ayatollah Sayyid Ali Khamenei, wrote a letter to the conference urging the gathered conspirators to continue the fight and for, "all individuals, who feel the importance of the great responsibility of freeing Palestine, to continue different methods of fighting against the usurper Zionist Regime." He went on to write in his letter that it was a "holy fight" (i.e., a jihad) with absolute victory assured against the "enemy Zionist entity."

The conference is a frightening symbol of the danger that Israel faces from the Islamic world. As Hamas builds out its extensive network of guerrilla tunnels (twice the size of the Vietcong's) and Hezbollah builds its rocket stockpile into the thousands, many Islamic nations are more willing to set aside their historic differences and squabbles in order to intensify their focus toward a single, unifying goal: the destruction of Israel.
The conference was chaired by Sunni Sheikh Maher Hammoud of Lebanon, who said that the meeting should "serve as a turning point to pave the way for liberation of Occupied Palestine and it will echo the voice of oppressed Palestinians worldwide." Make no mistake, there is no intention of a peaceful resolution here, but rather the military objective of destroying the Jewish people and the State of Israel.
In the same week, the Prime Minister of Hamas in Gaza, Yahya Sinwar, said in response to requests that Hamas disarm in order to negotiate peaceful coexistence with Israel, "Over is the time Hamas spent discussing recognizing Israel. Now Hamas will discuss when we will wipe out Israel," the Hamas linked new agency Shehab reported. There is clearly no intention of pursing peace despite its acceptance of a unified Palestinian government with Fatah and Abbas that the media has praised as paving the way for peace talks.

Exactly one hundred years after the Balfour Declaration some Islamic leaders are now preparing for a five-year countdown when they believe Israel will be no more.
The year 2022 has become an obsession over the past half decade for Islamic leaders. Hassan Rahimpour Azghadi of Iran's Supreme Council for the Revolution declared in 2015 that Israel would be destroyed in 2022.
In that same year, another Iranian cleric published a book that drew from the occult and calculations based on the Koran to predict Israel's defeat and annihilation in the year 2022.
The Islamic State, not be to left out, has also called for the war to be brought to Israel in 2022.
As the leaders of these groups plot in vain to destroy God's people, it is important to remember such verses as Psalm 21:11: "Though they intended evil against you and devised a plot, they will not succeed."