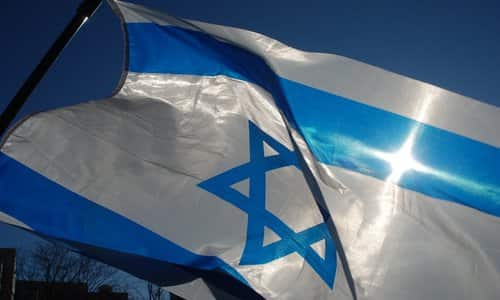 By Shiri Moshe/Algemeiner.com January 11, 2018
Share this article:
A group of Jewish students responded to a pro-Palestinian rally in Austria last month by displaying an Israeli flag -- and now face a €100 fine or two days in jail for the "provocation."
Avi, a member of the group who spoke to The Algemeiner on condition of anonymity, said he and three friends were present at a Dec. 8th rally near the American Embassy in Vienna, held in protest of US President Donald Trump's decision to recognize Jerusalem as Israel's capital.
Protesters at the rally chanted "very antisemitic messages," including shouting in Arabic, "Khaybar, Khaybar, oh Jews, the army of Muhammed is returning."

The slogan refers to a 7th-century battle fought by the Islamic prophet Muhammad against Jewish tribes near Medina, and is often invoked by Islamist terrorist groups including Hamas and Hezbollah.
Angered by these calls, two members of the group decided to display an Israeli flag in defiance of the crowd.
But they first approached one of the police officers securing the rally, "and asked her what would happen if they take the flag out," Avi said. "They wanted to be sure that they're not acting against some laws."
The officer told them to "try it out and see what happens," he recalled.
The friends decided to display the flag minutes later. Almost immediately, "one of the protesters came behind the guys who held the flag and started beating them from behind," Avi said.
The police officers rushed into action, stopping the attack and taking the flag holders from the rally to the entrance of a nearby parking garage.

The officers then searched the group members, asking them to take off all their outerwear, Avi recounted. "They were very unfriendly to us, they started calling us idiots and telling us that they should have left us out there and let the protesters take care of us."
The incident didn't end there. On Monday, Avi said he and his three friends received a letter from Vienna police, claiming that "they drew an Israeli flag, clearly visible to the participants of the rally, in a most provocative manner, generating considerable displeasure and provocation among the Palestinian protesters present."
Nonetheless, Avi said the group members thought "what we did was the right thing to do in the moment."
The story -- first reported by the Israeli Public Broadcasting Corporation -- led to expressions of support from peers and colleagues, Avi said. The group also received offers of legal assistance from the Jewish Communities of Austria (IKG), the leading representative of local Jewry.

IKG Secretary-General Raimund Fastenbauer told The Algemeiner that the students will be advised not to pay the fine, and rather take the case to court. He indicated that he was unaware of any similar cases that took place in Austria.
"I cannot understand how showing the Israeli flag in a democracy in the middle of Europe can be a provocation," Fastenbauer emphasized. "This cannot be understood by us, and we will not accept it."
Originally published by Algemeiner.com - reposted with permission.