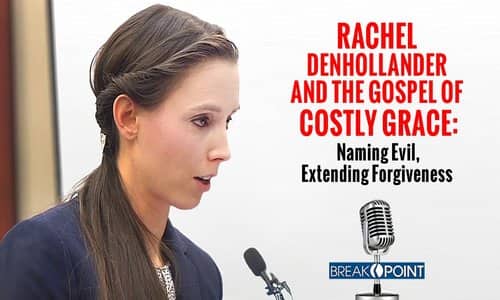 By John Stoneystreet/Breakpoint.org February 05, 2018
Share this article:
It was the most amazing courtroom testimony I've ever heard. And if you haven't heard it yourself, you need to.
Years ago, Rachael Denhollander was a vulnerable teenage gymnast under the supposed medical care of Larry Nassar, the Team USA gymnastics doctor who may be the most prolific sexual abuser in American history. A year and a half ago, Rachael bravely filed a police complaint that has ultimately led to his conviction on sexual assault charges and a prison sentence of 40 to 175 years.
The number of Nassar's victims has now reached over 260 young women, as more and more accusations continue to come in. Last week in a Lansing, Michigan, courtroom, 156 of his victims gave statements detailing what Nassar had done, how his serial child molestation had been overlooked for decades, and how the system had failed these girls and women.

Rachael Denhollander's comments, however, went further.
Leaving the judge to serve justice, Denhollander spoke directly to Nassar--and served grace. But not before forcing Nassar to face the enormity of the evil he had inflicted on innocent children. Denhollander clearly defined what Nassar did as sin. "You have become a man ruled by selfish and perverted desires," she said. "You chose to pursue your wickedness no matter what it cost others."
And then amazingly, Denhollander, now a married mother of three, expressed pity for the monster that Nassar had become. "In losing the ability to call evil what it is without mitigation, without minimization," she said, "you have lost the ability to define and enjoy love and goodness. You have fashioned for yourself a prison that is far, far worse than any I could ever put you in, and I pity you for that."
Denhollander, noting that Nassar had carried a Bible with him throughout the trial, reminded him that within that Bible Jesus said it was better to have a millstone tied around your neck and cast into the sea than it was to make one child stumble. "You," she said, "have damaged hundreds."

"The Bible [speaks of] a final judgment where all of God's wrath and eternal terror is poured out on men like you," she continued. "Should you ever reach the point of truly facing what you have done, the guilt will be crushing. And that is what makes the gospel of Christ so sweet," she continued. "Because it extends grace and hope and mercy where none should be found. And it will be there for you."
And then Denhollander did something that only Jesus Christ could inspire--she offered Nassar her forgiveness. "I pray you experience the soul crushing weight of guilt," she said, "so you may someday experience true repentance and true forgiveness from God, which you need far more than forgiveness from me--though I extend that to you as well."
Denhollander's words were a near-perfect depiction of what Dietrich Bonhoeffer called "costly grace." Unlike cheap grace, which Bonhoeffer said we "bestow on ourselves" because we say we're sorry, costly grace is "costly because it condemns sin, and grace because it justifies the sinner. Above all, it is costly because it cost God the life of his Son."

Denhollander's testimony should, in my opinion, be studied for years to come in every seminary. Her offer of forgiveness reminds me of what happened in Rwanda after the genocide, when believers unflinchingly acknowledged the evil of what the perpetrators had done to them, and then offered forgiveness because of Christ' death and resurrection.
The horrible story of Larry Nassar won't be over anytime soon--nor should it be. Thank God so much sexual abuse is now being revealed for what it is: evil. But also, thank God for the brave testimony of Rachel Denhollander revealing grace for what it is: amazing... and only possible because of Jesus Christ.
Originally published at Breakpoint.org - reposted with permission.