Warning: 'Major Strategic Clash' With Iran 'On The Horizon' 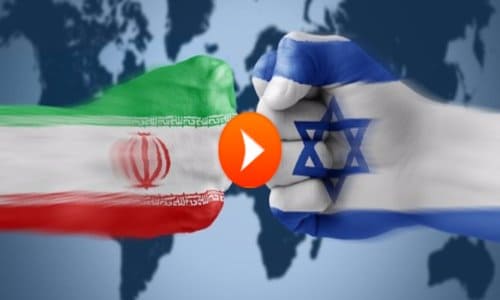 By Benjamin Kerstein/Algemeiner.com February 12, 2018
Share this article:
Israel and the Islamic Republic of Iran are on a collision course, a leading expert said on Sunday in the wake of Saturday's clash between the Jewish state and forces loyal to Iran in neighboring Syria.
There is "a major strategic clash on the horizon," said Amos Yadlin, the former head of IDF Intelligence and Executive Director of the Institute for National Security Studies (INSS).
Yadlin made his comments to the Hebrew-language daily Maariv the day after Israel shot down an Iranian drone over its territory and then retaliated with major airstrikes in Syria.

"We are speaking about an attempt that has never been made before," Yadlin said of the drone infiltration, and added that the likely motivation was Iran's desire to prevent Israel's ongoing attempts to prevent weapons transfers to the Hezbollah terrorist organization in Lebanon..
"The Iranians are not satisfied with the freedom of action Israel has taken and thus wanted to show Israel that it is also capable of attacking [Israeli] territory," Yadlin commented.
The Iranians hoped that Israel would not respond to the escalation, but were quickly proven wrong.
"There is no other air force in the world capable of achieving a goal like this within two hours," Yadlin said of Israel's response.
Following the incident, Yadlin stated, Israel is now "stuck in a difficult dilemma between whether to act preemptively or wait for the coming war. The Israeli cabinet must sit and examine whether the precision-guided missiles in Syria justify a preemptive operation that could lead us to war."

For now, he added, the Israeli government appears to be dealing with Iran's actions in Syria "on a case-by-case basis."
The Algemeiner reported on Saturday that Yadlin stated in a conference call that the ongoing conflict is born of "Iran's determination to build a force in Syria, and Israel's determination not to let them."
A former IAF pilot, Yadlin took part in 1981's legendary Operation Opera, which destroyed Iraq's nuclear facility in Osirak.
Speaking to Mida magazine, the former head of the IDF Intelligence Research Division Yossi Kuperwasser sounded a more optimistic note, saying of the Israeli retaliation, "There was an impressive Israeli demonstration of force, and we managed to send a clear message to the Iranians, as well as to the Syrians and Hezbollah.

We wrought tremendous damage upon Syria's air defenses and attacked at least four Iranian targets. We made it clear to Iran that we have enough capabilities to act decisively against their attempts to establish new rules of the game in the region."
Kuperwasser added that he felt Iran was now sufficiently deterred from attacking Israel. "Iran thought it would prove to the United States and especially to Europe that they had better not change the nuclear agreement because Tehran is afraid of no one.
It did not really work out for them because they now understand that they had better not get involved with Israel," he said.
Originally published at Algemeiner.com - reposted with permission.