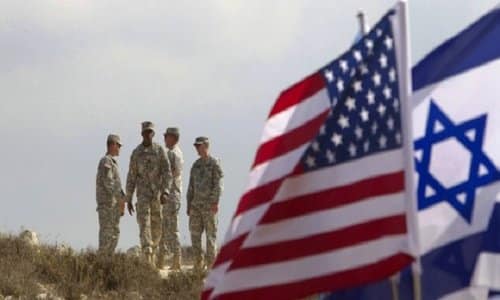 By Yakkov Lappin/JNS.org March 12, 2018
Share this article:
The Israeli and U.S. militaries are in the midst of a large-scale missile-defense exercise, designed to simulate responses to a Middle East war on multiple fronts.
The scenario at the heart of the planned, biannual drill involves the Israeli home front coming under heavy enemy fire from several directions simultaneously.

The Juniper Cobra 18 exercise, held since 2001, practices the rapid deployment of American air-defense units and equipment to Israel from Europe in the event of armed conflict, in addition to the integration of U.S. capabilities into Israel's air-defense layers.
"If conditions arise, and we are requested by the government of Israel, through our government, we will deploy," said Lt.-Gen. Richard M. Clark, commander of the United States 3rd Air Force.
Clark, who is based at Ramstein Air Base in Germany, added: "Once we get word, we can get here in days. I could be on the ground in one day. The fighting forces can be here within 72 hours."
Brig.-Gen. Zvika Haimovich, who heads the Israeli Air Defense Command of the Israel Defense Forces, said it was the largest U.S.-IDF exercise to date, adding that it is expected to play out in the course of more than four weeks.
Some 2,500 American personnel are taking part in the endeavor. Most were mobilized to Israel, while some stayed in Europe and the United States. Around 2,000 IDF personnel are taking part as well.
The United States European Command, based in Germany, sent a number of American air-defense systems to Israel.
"We will practice fighting shoulder to shoulder," explained Haimovich. "We are practicing responses to real, complex, multidirectional threats. The emphasis is, above all, on cooperation between commanders and people."

"Savlos, and more accurate, precise, multidirectional fire--those are our assumptions" of what a war will involve, he said. "It doesn't matter if these come from the south, north, or east . . . unfortunately, we live in an environment in which we need to keep up our skills every year," he said.
'Key and critical part' of the plan
The exercise costs millions of dollars to hold and two years to plan. The commanders declined to provide specific details on the threat scenarios they were simulating--the general scenario they described would appear to outline a war involving Iran, Hezbollah and Hamas firing heavy barrages of rockets and missiles on Israeli cities and towns.
The arrival of accurate rockets and missiles in enemy inventories has played a role in the planning of the drill.
The first part of the drill involves computer simulations, in which Israeli and American air-defense systems are linked to one another and practice shooting down computer-generated threats. In the second stage, live-fire targets will be shot down by U.S. and Israeli Patriot systems, and by an Israeli Iron Dome battery.
Israel is fielding all of its air-defense systems in the exercise. These include Iron Dome; the recently deployed David's Sling system, designed to intercept medium- and long-range ballistic missiles and cruise missiles; and the Arrow 2 and Arrow 3 systems, which intercept missile threats in the atmosphere and in space, respectively.
An interception officer operating the David's Sling system said the system has been operational "for almost over a year." He added that it is "deployed across Israel."

Col. David E. Shank, commander of the 10th Air and Missile Defense, U.S. Army-Europe, told JNS that two versions of American Patriot systems are in Israel for the drill. America's Terminal High Altitude Area Defense system, or THAAD, which is designed to shoot down ballistic missiles as they descend, was also deployed. A powerful transportable radar was brought by the Americans to Israel.
Clark told JNS that the American Aegis Combat System, which is a ship-based missile-defense system, is also playing a "key and critical part" in the exercise.
Meanwhile, the U.S. Navy's Mount Whitney, a command and control, arrived from its base in Italy and docked at the Haifa port to take part in the drill.
Ultimately, said Clark, the ability of America and Israel to moor their systems will define success. He acknowledged that this would have to be done under fire during wartime.
"From the first day we arrive, we have to be able to link up," he affirmed. "Every day, we get a little better."
Originally published at JNS.org - reposted with permission.