The Deadly Gospel Of Nice 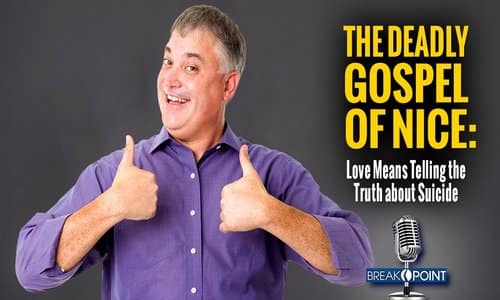 By John Stonestreet/Breakpoint.org April 30, 2018
Share this article:
Truly loving people can mean telling them things they don't want to hear--like, "suicide is not something to celebrate."
A few weeks ago, I quoted the Christian satire site, the Babylon Bee. As someone with the spiritual gift of sarcasm, I appreciate many of their headlines. This one, however, really hit the mark: "Progressive Christian Criticizes Jesus For Not Being Very Christlike."

One can imagine certain believers these days uncomfortable with the Prince of Peace's calling the Pharisees "whitewashed tombs." Jesus' honesty cuts against the popular modern ethic claiming to be all about love, but which is, in reality, a gospel devoted to being "nice."
But nice isn't the same thing as love. True love is concerned with the good of the beloved, and can never be divorced from the truth of how God created us and intends us to live. When we ignore that truth, we can "nice" people to death.
A disturbing example comes out of Ontario, where George and Shirley Brickenden recently threw a "bon voyage party" for their families, before committing suicide together by having their doctor administer lethal injections.
LifeNews reports that no one tried to stop them. And more shocking still, the dean of Toronto's St. James Anglican Cathedral not only attended and blessed the procedure but then said he'd be honored to give the couple an Anglican funeral.
Now this is what the gospel of nice, which is based on sentimentality and not love, looks like. It prioritizes short-term happiness over the true and the good. In this case, it leads to blessing self-murder rather than offering those hard but loving words, "This is wrong."

Progressive churches have raised the gospel of nice to an art form. It's the whole rationale behind blessing same-sex "marriages" and abortion clinics. Mark my words, we'll soon see Canada's Anglican church developing liturgy for physician-assisted suicide.
But the gospel of nice isn't just a progressive heresy. Evangelicals often withhold truth in the name of love, as well. I think, for example, of the widespread acceptance of surrogacy and in vitro fertilization in evangelical churches.
A recent Christianity Today cover story quoted couples who've conceived children using unethical methods as well as women who "feel called" to be surrogates as their form of Christian service.
But Christian and even non-Christian bioethicists have argued that surrogacy treats children like commodities that are manufactured by renting wombs. Most European countries ban surrogacy on the grounds that it leaves the poor vulnerable to exploitation.
As Matthew Lee Anderson and Jake Meador pointed out recently in "Mere Orthodoxy," for too many evangelicals, heartfelt stories of personal experience trump ethical arguments and theological reasoning, a problem only made worse by the fact that many churches avoid biblical or theological training in areas like reproductive technologies altogether.
Anderson and Meador conclude that when you "Combine the emotive spirituality that animates middle-class evangelical piety" with "a profound sense of compassion for those who are hurting," then surrogacy and in-vitro fertilization seem like not only something God allows, but something He wants.
If such experience replaces moral reasoning and even Scripture, and if making people feel loved is more important than telling them the truth, where does this end?
Will we accommodate transgender ideologies rather than make the uncomfortable stand for God's design for male and female? Will we hear of Christian surrogates carrying babies for gay couples?
The real Gospel, of course, offers joy beyond anything found in this world. But it does so by first telling us hard truths: that we can't erase suffering through euthanasia or by renting wombs--and that what God created and redeemed us for isn't always what makes us happy.
That's not nice. But it is true love.
Originally published at Breakpoint.org - reposted with permission.