"Westworld" And Why Be Good?: What Cruelty Does To Us 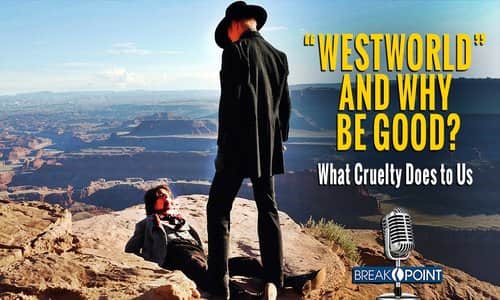 By John Stonestreet/Breakpoint.org May 15, 2018
Share this article:
There's a question raised by the HBO series "Westworld." It's a question I'll try to answer.
In late April, the long-awaited--at least by its fans--second season of "Westworld" began on HBO.
Since most of us don't subscribe to HBO, a little background is in order. The show is loosely based on a 1973 film about an amusement park where robots, which are called "hosts" in the HBO series, enable visitors to act out their darkest fantasies in a setting free from judgment or real-world consequences.

In both the older film and the newer television series, things go very wrong. The "hosts"--that is, the robots-increasingly resist being mistreated by the guests, and they revolt.
Now let me be clear. This HBO show is incredibly violent, and full of nudity. I'm not suggesting you watch. In fact, don't. But you can still join in on an interesting and worthwhile discussion the show has sparked. It's among the most basic of human questions: Why should we be good?
Producers of "Westwood" want viewers to feel sympathy and even anger for the robots when the park's guests "kill" or otherwise brutalize them, even though the hosts aren't really "dead" and all memories of what is done to them are erased.
Still, viewers know something's wrong with the whole arrangement. The question is-what? Or as a recent New York Times article asked: "What's Wrong with Cruelty to Robots?"
The authors of the article, psychologist Paul Bloom and new atheist Sam Harris, attempt to answer the question. They say that what makes it wrong is that the hosts possess consciousness, and with consciousness comes the capacity for suffering.

Now without getting too far into the show's weeds, only one robot exhibits traits that might suggest consciousness. Or it may even be an extremely sophisticated bit of programming, a kind of artificial intelligence with human features.
So then Bloom and Harris make two additional claims: first, that few "philosophers and scientists" doubt that "consciousness emerges from the material world," and second, that "the creation of conscious machines is possible."
To put it politely, they're talking out of their hat. There's no shortage of scientists, much less philosophers, who doubt that very much.
Their backup argument is that even if the hosts don't possess consciousness, they mimic us so well that it's "irresistible to see this creature as a person . . . regardless of what its creators told you about how it was built."
But human experience tells us that this is no shield against cruelty. The ancient Romans had an expression, homo homini lupus est, "man is a wolf to his fellow man." We have no trouble preying on people we know possess consciousness. So what would stop us from doing so to a machine that we know doesn't?
The answer is suggested by the owner of the park. While he doesn't believe in an all-knowing God who judges our actions, he knows that many of his guests do, which restrains their actions outside the park. So the guests "wanted a place hidden from God; a place they could sin in peace."
Now of course, no such place exists in the world. Nothing is "hidden from God." Ask Jonah. Or David, who himself asked in Psalm 139, "Where can I flee from your presence?" The answer--nowhere.

Ultimately, the only answer to "Why be good?" is that all of human existence is lived, to use another Latin phrase, "Coram Deo," which means "in the presence of God."
And we should also consider how God made us. C. S. Lewis pointed out in Mere Christianity, "every time you make a choice, you are turning the central part of you, the part that chooses, into something a little different than it was before . . . all your life long you are slowly turning this central thing into a heavenly creature or a hellish creature."
In other words, acting with cruelty, no matter who or what is on the receiving end, makes us more fit for Hell than for Heaven.
Originally published at Breakpoint.org - reposted with permission.