What Would Have Happened Had Palestinian Rioters Got Through? 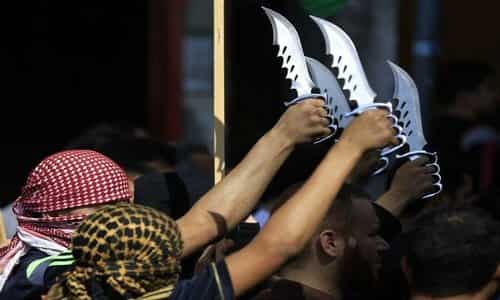 By JNS.org May 17, 2018
Share this article:
Two Palestinian Facebook pages and a forum directing rioters in Gaza gave explicit instructions to murder and kidnap Israelis on May 14, the day the U.S. embassy opened in Jerusalem, as well as suggestions on how to accomplish this goal.
It is not clear if Hamas itself was the group sending these messages but recent speeches by their leaders indicate they were all for spilling as much blood as possible.  A Hamas official has admitted in an interview that 50 of some 62 Palestinians killed in recent clashes with Israeli security forces along the Gaza border were members of the Palestinian terrorist group.

What is critical is that Gazans were encouraged to bring weapons to the demonstrations and use these weapons to either murder or capture Israelis. Israeli soldiers were facing the threat of Palestinians who were using the cover of demonstrating civilians to attempt to break through the border with the goal of murdering and kidnapping Israelis.
The following are the instructions to bring weapons, murder "soldiers and settlers," and kidnap Israeli citizens for use as bargaining chips to impose conditions on Israel:
"Rebelling young people,
Treat seriously and do not take lightly the requests to bring a knife, dagger, or handgun, if you have one, and to leave them under your clothes and not use them or show them, except if you identify one of the Israeli soldiers or settlers. Do not kill Israeli civilians, instead hand them over to the resistance immediately, because this is the point that Israel fears, as it knows that the capturer can set any condition he wants."
The instructions also described how masses of Palestinians would "collectively" breach the security fence aided by bulldozers:
"At a certain time ... there will be a collective advance towards the barbed wire fence until we remove it with our strong hands and exposed bodies all at once, while being aided by loudspeakers and calls of 'Allahu Akbar' (i.e., Allah is greatest) by the masses. Therefore, do not advance individually, make do with the collective advance according to the instructions, because there will be bulldozers at the back that will advance in order to completely remove the fence."

Gazans were instructed not to deal with "the wounded or the Martyrs" but to concentrate on "the battlefield":
"Do not busy yourselves with the wounded or the Martyrs (Shahids), as the medical teams behind us are ready for this. Just pay attention to the battlefield and act wisely and according to the instructions."
The portrayal of the events in Gaza by some news agencies as peaceful demonstrations is clearly false.
The Facebook page "The Great March of Return" was opened in March 2018 and states its goal as "live and continuous coverage of the activities of the Great March of Return." It posts updates from the march every few minutes and has around 6,000 followers. The second Facebook page that ran the post is called "Gaza Now," [May 13, 2018] but the post was later removed from this page. Likewise, the instructions were shared in a forum thread on the "March of Return" protests on a Palestinian web forum named "PALDF." [May 13, 2018]
Originally published at JNS.org - reposted with permission.