Gender Ideology And Public Schools: These Are Our Kids 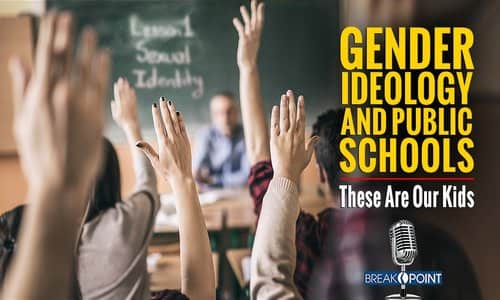 By John Stonestreet/Breakpoint.org May 17, 2018
Share this article:
Parents today--especially in California--face really tough questions about their children's education. One of them: Who do kids belong to?
In 2015, California passed what it dubbed "The Healthy Youth Act." The stated aim of the legislation was two-fold: first, to "provide pupils with the knowledge and skills necessary to protect their sexual and reproductive health" from things such HIV, STDs, and "unintended pregnancy."

Second, to give students "knowledge and skills" to help them develop "healthy attitudes" concerning, "body image, gender, sexual orientation, relationships, marriage, and family."
At this point, cries of "Danger! Danger! Will Robinson!" and (kudos if you get that reference) could be heard from Crescent City to Calexico. To "reassure" concerned parents, the law allowed parents to "excuse their child from all or part of comprehensive sexual health education, HIV prevention education."
But the law explicitly states that this "right" to excuse your child does not extend to "instruction, materials, presentations, or programming that discuss gender, gender identity, gender expression, sexual orientation, discrimination . . . relationships or family..." In other words, parents in California can opt their kids out of the anatomy but not the ideology.
Well many parents missed the caveat and operated under the assumption that being able to opt out of what is normally thought of as "sex ed," i.e., the anatomy part, would mean they'd be able to spare their kids the indoctrination part.

But they were wrong. In late March, in response to a request from members of the Orange County Board of Education, the Board's general counsel wrote that, under "The Healthy Youth Act," parents "may not excuse" their children from instruction about "gender, gender identity, gender expression," and the rest.
He added that "the courts have held that parents do not have the constitutional right to override the determination of the state legislature or the school district as to what information their children will be provided in the public school classroom." All parents have the right to do is "advise their children that they disagree with" what's being taught.
Not surprisingly, parents are outraged. But to be clear, the general counsel was just reiterating what the law explicitly stated.
What's more, the troubling California goings on isn't limited to just sex ed classes and curricula. As William May of Catholics for the Common Good told the National Catholic Register, "All this indoctrination is being integrated into other courses, not just sex education . . . it's being integrated into history and literature. . . ." He added that "It's essentially getting to the point where parents will have to opt out of public education."

Or, as a few of my friends seem to be considering right now, it may be time to opt out of California altogether. Still, those looking for greener grass need to know it's not only in California that would-be indoctrinators have figured out stealthier and more-effective places for their ideas. In most places, parents can opt their children out of sex ed. But whoever thinks about opting their kids out of literature or history?
So, what can parents do? First, let's remember that our kids don't belong to the state, and certainly not to these would-be indoctrinators. By "our kids" I mean that we, parents, are primarily and ultimately responsible for their well-being and formation. To the extent other entities are involved, it should be to support, not to usurp our God-ordained role.
Second, we need to be prepared to fight on this one. According to the Register, Orange County school board meetings have been "standing-room only" since that memo came out. But that may be too late and not enough. Parents are going to have to make difficult decisions about their kids' educations.
So let's keep them in our prayers. Their fight is ours too: reminding would-be Leviathans whose children we're talking about.