Jesus Is No Longer The Only Way For Many American "Christians" 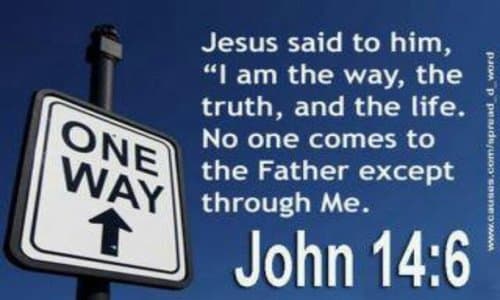 By PNW Staff June 06, 2018
Share this article:
For two thousand years, a core tenet of Christianity has been that, to paraphrase John 14:6, Jesus is the way, the truth and the life - no one comes to the Father but through Him. The eternal reward of Heaven is exclusively for those who repent, put their faith in Christ's sacrifice on the cross and asked to be saved from their sins.
Now even this bedrock belief of Christianity has been undermined by some ministers who preach, in the postmodern age of liberal theology, that there are many paths to God and Heaven.

One such "open-minded" voice is the pastor Michael Walrond Jr. who preaches at Harlem's First Corinthian Baptist Church. Preaching to a portion of his 10,000 strong congregation, he is quoted as saying, "There was a time when you would see people in the pulpit say, 'well, if you don't believe in Jesus you're going to Hell. That's insanity in many ways because that is not what Jesus even believes."
He did not bother to cite the precise verses of scripture where Jesus tells His followers that there are other paths to God and that He is not the only way or the only truth. But it is likely that he didn't need to in order to sway his audience, because the pastor, and others like him, are tapping into a powerful in postmodern and liberal theology in which Christians no longer believe in the traditional view of Christ's sacrifice and its value.
Ten years ago, in 2008, studies done by the Pew Research Center showed that more than half of American Christians no longer believed that Christianity was the only way to come to God and enter Heaven. Members of African American churches and evangelicals were the most likely to believe in the God of the Bible at 92 and 91%, far greater than the average.
Pluralistic notions of religious relativism and vague spirituality have resulted in a stark difference between traditional Christian doctrine and the now common belief that Christ's sacrifice is just one method of salvation among hundreds. In a pluralistic society, the reasoning isn't hard to imagine.  After all, wouldn't it be horrible if our Muslim, Hindu, Buddhist and atheist neighbors, who are nice enough people, couldn't go to Heaven with us? That just wouldn't be fair, especially if they believed in their version of God.
Out of the 80% of Americans who profess a belief in a god, only 56% of the total believe in the God of the Bible. Muslims, Jews and Hindus make up a very small part of this difference, but much greater are those who hold a vague, spiritualist notion of what God is, while clinging to Christianity in name only, including 28% of Catholics, 26% of Protestants who, according to this survey, no longer believe in the God of the Bible.

What caused this shift? There are doubtless several factors at work here, such as a breakdown in family structures, an increasingly postmodern culture and media attacks on traditional Christianity. Institutions of higher education are among the chief culprits in this change, according to J. Lanier Burns, a senior professor of systematic theology at Dallas Theological Seminary.
According to Burns, "This is the agenda of the universities at the present time because it is felt that maybe it is religion that has generated all the wars and so maybe if we can get rid of exclusive religion we might have greater peace in the world." Could he be on to something? Could seminaries and schools of theological studies be transforming religious belief on such a grand scale to fit their agenda?
The liberal bias in higher education, a self-reinforcing cycle, is especially pronounced in university religion departments. A recent study by Mitchel Langbert of Brooklyn College, found that, among 8,688 professors (with a Ph.D. and on tenure paths) from the 51 of the top universities, Democrats outnumbered Republicans by a 10 to 1 ratio. But in religion departments, the ratio is an astounding 70 Democrats for every 1 Republican.
It is not difficult to conjecture that there may be some connection here between liberal politics and liberal religion, but it is also true that the same forces at work to create such a political imbalance have also worked to create and reinforce a trend toward increasingly liberal theology.
Langbert points out that "Political homogeneity is problematic because it biases research and teaching and reduces academic credibility. Even though more Americans are conservative than liberal, academic psychologists' biases cause them to believe that conservatism is deviant." Within the university setting, dare to defend Biblical beliefs and traditional Christianity in many divinity schools and you may suffer consequences.
Burns also points to a shift from finding truth in scripture to a view of truth as mere societal consensus, a sort of democratization of God in the postmodern age. "We are going wrong because we have moved the authority from Scripture to consensus. That's where we are going wrong".

Finally, as we seek to answer the question, 'what has caused this shift?', we need look no further than the church, itself, as suggested in the first paragraph of this article.
Men who have become popular or prominent within the church, seek to enhance their popularity (or offerings) by a watered-down Gospel. Having been seminary-trained to be CEO's instead of Biblical proclaimers of the Gospel, many pastors are structuring their style to be 'consumer' oriented; to be 'appealing' rather than 'demanding'. Some call this being 'seeker sensitive'.
In an interview with Phil Donahue in 1984, Norman Vincent Peale said: "It's not necessary to be born again. You have your way to God; I have mine. I found eternal peace in a Shinto shrine. ... I've been to the Shinto shrines, and God is everywhere." Donahue then exclaimed, "But you're a Christian minister; you're supposed to tell me that Christ is the Way and the Truth and the Life, aren't you?" Peale replied, "Christ is one of the ways! God is everywhere."
In an article in Christianity Today, Robert Schuller said that the most destructive thing that has been done in the name of Christ is the attempt to make people aware of their lost and sinful condition. He called it "crude" and "uncouth".  [October 5, 1984]
But Jesus Christ says, "I am the way, the truth, and the life: no man comes unto the Father, but by Me." (John 14.6)
When Peter stepped out of the upper room on the Day of Pentecost, he preached Christ crucified and solemnly declared, "Neither is there salvation in any other: for there is none other Name under heaven given among men, whereby we must be saved." (Acts 4.12)
The apostle Paul, in meeting with the Ephesian elders, warned that men would arise within the church ("of your own selves") "speaking perverse things, to draw away disciples after them". (Acts 20.30) It is the rampant deception that marks these Last Days, and it is being fulfilled among us, in spades.