European Union Continues To Fiscally Back Hate Education Against Israel 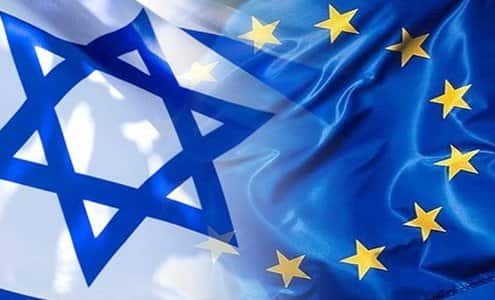 By Michael Calvo / JNS.org August 28, 2018
Share this article:
In May 2018, the Israeli Ministry of Strategic Affairs and Public Diplomacy published a report titled "The Money Trail: The Millions Given by EU Institutions to NGOs With Ties to Terror and Boycotts Against Israel, an In-Depth Analysis."
Two months later, the High Representative of the European Union for Foreign Affairs and Security Policy, Frederica Mogherini, replied to the report. Her main arguments were that allegations of the European Union supporting incitement or terror were unfounded and unacceptable -- and that terror and boycotts are two distinct phenomena.

The aim of Pegase DFS is to assist the PA to meet its obligations towards its civil servants, pensioners, and vulnerable families; maintain essential public services; improve public finances; and pay teachers' salaries. Among the civil servants and pensioners who received payments from Pegase DFS during 2014 and 2015, 67% were working in the health and education sectors.
Palestinian children are taught to kill and hate Israelis in their public schools -- so by supporting teachers' salaries, the European Union financially participated and continues to participate in hate education, disregard for the lives of the Jews and others by promoting jihad, and inciting children to become martyrs.
Concerning boycotts, the European Union has no qualms about applying double standards to Israel. It boycotts Israel's "occupation," but not other -- real -- occupations across the globe.
In 2013, the European Union found it appropriate to ban grants, prizes, and financial instruments (such as loans and bank guarantees) to Israeli entities in Judea and Samaria (the West Bank), eastern Jerusalem, and the Golan Heights. In September 2015, the European Union drafted various rules, arguing that consumers must know that some imported products come from the settlements and not from Israel.
Under international law, the question of whether the West Bank territory is occupied remains far from settled. However, the European Union finds it legitimate to provide direct financial assistance to Turkish settlements in the occupied territory of Northern Cyprus.

It funds the occupation of an EU member state (Cyprus) purportedly to "end the isolation of the Turkish Cypriot community." Concerning the Moroccan occupation of the Western Sahara, European businesses and universities openly operate in these "occupied territories" without being barred from EU funding, while similarly situated Israeli entities are disbarred.
China is not required to label products coming from Tibet, which it has occupied since 1951. Goods originating from "occupied territories" such as Northern Cyprus, Gibraltar, the Falklands, Western Sahara, Tibet, Kashmir, and the Russian-held regions of Azerbaijan are not specially labeled.
The European Union does not treat Israel like it treats other countries. It applies double standards by requiring from Israel "a behavior not expected or demanded of any other democratic nation." This represents antisemitism, according to the Working Definition of Anti-Semitism of the European Monitoring Center on Racism and Xenophobia, and the European Forum on Anti-Semitism.
Originally published at JNS.org - reposted with permission.