Israel Losing One Of It's Strongest Defenders On World Stage 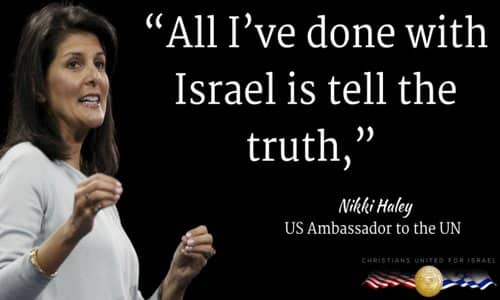 By Sean Savage/JNS.org October 10, 2018
Share this article:
Nikki Haley, who has been the face of the Trump administration's strong stances in support of Israel, has resigned as ambassador to the United Nations on Tuesday.
A former Republican governor of South Carolina, Haley, who has served as U.N. ambassador since the beginning of the Trump administration, will step down from his position at the end of year.

U.S. President Donald Trump had apparently know of her decision for a while before her announcement. He said that "she's done a fantastic job, and we've done a fantastic job together. We've solved a lot of problems and we're in the process of solving a lot of problems."
Haley responded that the United States is now respected again on the world stage, while listing tackling anti-Israel bias as one of her top accomplishments.
"They get it when the president says he means business," she said. "If you look at the anti-Israel bias and the strength and courage the president showed in moving the embassy."
Trump said the search for her replacement will happen in the next few weeks.
Haley has received widespread support from both Israeli officials and the American Jewish community for her strong support of Israel at the world body, which has been a hotbed of criticism of the Jewish state for decades.
"We appreciate the new spirit of ambassador Nikki Haley; she has been very important and helpful," Israel's Ambassador to the United Nations Danny Danon told JNS earlier this year. We work very closely with ambassador Haley and her team. We see similar issues, and understand the challenges and threats. That's why you see the cooperation because we come from the same values."

Early on in her tenure as U.N. ambassador, Haley made it clear that she would no longer tolerate anti-Israel bias at the world body. During a March 2017 speech to AIPAC, declared herself as the U.N.'s "new sheriff in town" and declared "the days of Israel-bashing are over."
'A steadfast friend of our community'
"Nikki Haley is a great champion of human rights, of U.N. reform and for a strong U.S.-Israel relationship," said Daniel S. Mariaschin, executive vice president and CEO of B'nai B'rith International. "She called out the bias against Israel time and again, and spoke directly about the hypocrisy and politicization that pervades the organization. A steadfast friend of our community and of Israel, we hope we'll continue to hear her voice on the many issues she has championed."
Michael Makovsky, president and CEO of JINSA, said that he "deeply regrets" her resignation. "She quickly became a rock star, strongly advocating for U.S. positions on all matters in the U.N., including championing Israel and consistently defending it from the constant barrage of hypocritical attacks in that body, and as well as highlighting Iran's many transgressions. Americans owe Amb. Haley our deepest gratitude, and welcome her return to public service at some date."
Shoshana Bryen, senior director of the Jewish Policy Center, said she is "saddened by the resignation of Ambassador Nikki Haley as U.S. Ambassador to the United Nations. She has been a strong, articulate voice for our country, our interests and our allies--not only our ally Israel, but most particularly Israel.
In the face of enormous pressure from U.N. institutions with built-in biases against Israel and the United States, she never lost her composure while never missing an opportunity to stand for what is right. While we wish her well in her future endeavors, she will be sorely missed by Americans and others who treasure plain-spoken truth."
Pastor John Hagee, founder and chairman of Christians United for Israel, told JNS that "Nikki Haley has been an example of a shining city on a hill for the nations of the world to follow. Her uncompromising leadership will be missed by lovers of peace and friends of Israel. She was a voice and not an echo. We are very grateful for her service to America and for her unwavering support of the U.S.-Israel relationship."

During her 2018 address to AIPAC, Haley again received an overwhelmingly positive response, getting numerous standing ovations from the pro-Israel crowd.
"Some people accuse us of favoritism towards Israel," she said. "There's nothing wrong with showing favoritism towards an ally; that's what being an ally is all about. But in all that we're doing, our approach on Israel is tied to one major idea--the simple concept that Israel must be treated like any other normal country."
"We appreciate the strong leadership of Ambassador Haley," said AIPAC spokesperson Marshall Wittmann, "and we thank her for consistently standing up for American interests and our democratic ally Israel."
During her time at the United Nations, Haley presided over the U.S. pullout of UNESCO and the Human Rights Council, citing their bias against Israel as the reason.
Additionally, the United States also announced that it would end funding to UNRWA, the U.N. agency that handles Palestinian refugees, accusing the organization of corruption and perpetuating the Israeli-Palestinian conflict.
Originally published at JNS.org - reposted with permission.