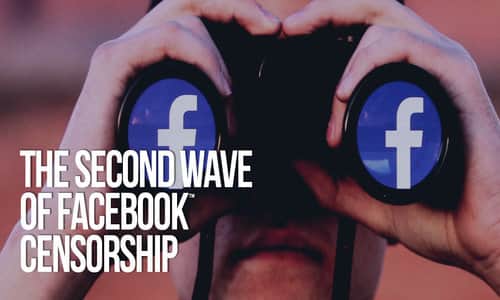 By PNW Staff October 15, 2018
Share this article:
The digital nanny state strikes again... just in time for midterms. Facebook has removed 559 pages and 251 accounts they claim have been spreading misinformation and spam.
Several of the pages however - some with millions of followers, were conservatives who had spent years cultivating their followings and their "misinformation" would be seen by many as views that don't line up with the mainstream media's message.

Prophecy News Watch now finds itself one of those banished Facebook pages after establishing a loyal following of 400,000 likes.  While our path to banishment was a little different than the current purge of conservative sites, we have found it more than coincidental that our case appeal to Facebook for reestablishing ownership of our site after a hack attack was denied at the same time several large alternative sites were being shut down with no warning:
Facebook has unpublished our page
After 5 years of building fans Facebook has officially unpublished our page (3.1 million fans) so we can't post on it anymore. This is truly an outrage and we are devastated. We will do everything we can to recover our page and fight back.
-- Free Thought Project (@TFTPROJECT) October 11, 2018
I've been memory holed from FaceBook! 350k followers poof gone! There is a dangerous precedent being set here where the big tech companies have appointed themselves as the gate keepers of political thought and opinion! Retweet this if you care about free-speech!
-- Dan Dicks (@DanDicks Press For Truth) October 11, 2018
Our @facebook page with over 2.1 million followers has been unpublished, along with over 800 other pages and accounts. The purge of alt-media is upon us.
-- Anti-Media (@AntiMedia) October 11, 2018
Facebook claims that "domestic actors" have been creating "fake pages and accounts to attract people with shocking political news," reports Bloomberg.
"The people behind the activity also post the same clickbait posts in dozens of Facebook Groups, often hundreds of times in a short period, to drum up traffic for their websites," Facebook said in a Thursday blog post. "And they often use their fake accounts to generate fake likes and shares. This artificially inflates engagement for their inauthentic pages and the posts they share, misleading people about their popularity and improving their ranking in news feed."

Some pages Facebook removed had large followings of real and fake accounts. Nation in Distress, a conservative meme page, was followed by more than 3 million people, according to the Internet Archive, which stores historical versions of websites and other online content. -Bloomberg
The midterm election is being used as an excuse to purge social media accounts and thus reduce traffic to websites on the target list.
First it was alt-right figures like Milo Yiannopoulos and Mike Cernovich who had their accounts pulled for behavior that is an everyday occurrence by others on social media.
Then Alex Jones was taken down. This was a landmark event that served notice on other websites diverging from the establishment narrative and spreading dangerous "alternative facts."
Now the effort has moved on the the next level of targets, those with moderate to high social media traffic and successful websites with growing viewership. Not millions like Jones, but a couple hundred thousand all the way down to tens of thousands.
Numbers are now way down for sites that are banished or shadow banned (algorithms purposely send traffic elsewhere so you essentially don't exist) from the corporate social media kingdom. Traffic is drying up and thus support.
This is precisely what the establishment and its political class have in mind. It has nothing to do with "inauthentic" content as they claim. It is a concerted effort to wipe out for good entire segments of the alternative media.
If Democrats take control of Congress next month, watch out. They will make it impossible for anyone holding alternative views to be heard.
Google, Facebook, Twitter, and others are building an algorithmic filter. This slow boil censorship will eventually make it so entire segments of the population will be silenced on political issues during federal elections and most won't even know it.

If successful in November, it will be further implemented after the election.
The European model (not based on constitutional liberties) will be adopted. This is a collectivist arrangement where certain groups are protected by the government while individuals are singled out and prosecuted for criticizing the arrangement on social media.
Somewhere down the line many of us can expect to be barred access to the Internet if we appear on a government list similar to the no-fly list. This will be easy to implement. Pass a law forbidding ISPs from selling service to Americans espousing political ideas considered racist, homophobic, misogynistic, transphobic, etc., by the government.
In the current political climate, it's easy to fall into one of these categories. Others will be memory holed simply due to their political philosophy, most notably conservatives and libertarians.
The internet as we know it is changing rapidly and if we don't stand up to this censorship it will soon be too late when you discover your voice is silenced as well.