The Annihilation of Iraq's Christian Minority 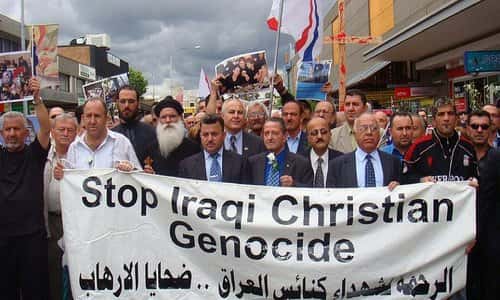 By Raymond Ibrahim/Gatestone Institute November 07, 2018
Share this article:
"Another wave of persecution will be the end of Christianity after 2,000 years" in Iraq, an Iraqi Christian leader recently said. In an interview earlier this month, Chaldean Archbishop Habib Nafali of Basra discussed how more than a decade of violent persecution has virtually annihilated Iraq's Christian minority.
Since the 2003 U.S.-led invasion, the Christian population has dropped from 1.5 million to about 250,000 -- a reduction of 85%. During those 15 years, Christians have been abducted, enslaved, raped and slaughtered, sometimes by crucifixion; a church or monastery has been destroyed about every 40 days on average, said the archbishop.
While it is often assumed that the Islamic State (ISIS) was the source of the persecution, since that terror group's retreat from Iraq, the situation for Christians has barely improved. As the archbishop said, Christians continue to suffer from "systematic violence" designed to "destroy their language, to break up their families and push them to leave Iraq."

According to the "World Watch List 2018" report, Christians in Iraq -- the eighth-worst nation in the world in which to be Christian -- are experiencing "extreme persecution," and not just from "extremists."
Although "Violent Religious Groups" (such as the Islamic State) are "Very Strongly" responsible, two other societal classes seldom associated with the persecution of Christians in Iraq are also "Very Strongly" responsible, the report states: 1) "Government officials at any level from local to national," and 2) "Non-Christian religious leaders at any level from local to national." Also, three other societal groups -- 1) "Ethnic group leaders," 2) "Normal citizens (people from the general public), including mobs," and 3) "Political parties at any level from local to national" -- are all "Strongly" responsible for the persecution of Christians in Iraq. In other words, virtually everyone is involved.
The report elaborates:
"Violent religious groups such as IS and other radical militants are known for targeting Christians and other religious minorities through kidnappings and killings. Another source of persecution are Islamic leaders at any level, mostly in the form of hate-speech in mosques. Government officials at all levels are reported to threaten Christians and 'encourage' them to emigrate. Also, normal citizens in the north have reportedly made remarks in public, questioning why Christians are still in Iraq."
Several regional Christian leaders confirm these findings. According to Syriac Orthodox bishop, George Saliba:
"What is happening in Iraq is a strange thing, but it is normal for Muslims, because they have never treated Christians well, and they have always held an offensive and defaming stand against Christians.... We used to live and coexist with Muslims, but then they revealed their canines [teeth].... [They do not] have the right to storm houses, steal and attack the honor of Christians. Most Muslims do this, the Ottomans killed us and after that the ruling nation-states understood the circumstances but always gave advantage to the Muslims. Islam has never changed."
Father Douglas al-Bazi -- an Iraqi Catholic parish priest from Erbil who still carries the scars from torture he received 9 years earlier -- made the same observation:
I'm proud to be an Iraqi, I love my country. But my country is not proud that I'm part of it. What is happening to my people [Christians] is nothing other than genocide. I beg you: do not call it a conflict. It's genocide... When Islam lives amidst you, the situation might appear acceptable. But when one lives amidst Muslims [as a minority], everything becomes impossible.... Wake up! The cancer is at your door. They will destroy you. We, the Christians of the Middle East are the only group that has seen the face of evil: Islam.

The Iraqi government is complicit -- when not actively participating -- in the persecution. As one Christian man explained after being asked why Christians in Iraq do not turn to governmental authorities for protection:
"Contacting the authorities forces us to identify ourselves [as Christians], and we aren't certain that some of the people threatening us aren't the people in the government offices that are supposed to be protecting us."
When Christians do take the risk of reaching out to local authorities, police sometimes rebuke them with comments like, "[you] should not be in Iraq because it is Muslim territory."
The Iraqi government has only helped foster such anti-Christian sentiments. In late 2015, for instance, it passed a law legally forcing Christian and all other non-Muslim children to become Muslim if their fathers convert to Islam or if their Christian mothers marry a Muslim.
Government-sponsored school curricula present indigenous Christians as unwanted "foreigners," although Iraq was Christian for centuries before it was conquered by Muslims in the seventh century. As a Christian politician in the Iraqi Ministry of Education explained:
"There's almost nothing about us [Christians] in our history books, and what there is, is totally wrong. There's nothing about us being here before Islam. The only Christians mentioned are from the West. Many Iraqis believe we moved here. From the West. That we are guests in this country."
"If the Christian children say they believe in Jesus" in school, notes one report, "they face beatings and scorn from their teachers."
Most telling is that the Iraqi government hires and gives platforms to radical clerics whose teachings are nearly identical to those of the Islamic State. Grand Ayatollah Ahmad al-Baghdadi, for instance, one of the nation's top Shia clerics, explained during a televised interview the position of non-Muslims living under Muslim rule:
"If they are people of the book [Jews and Christians] we demand of them the jizya [a tax on non-Muslims] -- and if they refuse, then we fight them. That is if he is Christian. He has three choices: either convert to Islam, or, if he refuses and wishes to remain Christian, then pay the jizya. But if they still refuse -- then we fight them, and we abduct their women, and destroy their churches -- this is Islam!...This is the word of Allah!"
Considering that Muslims in Iraq are indoctrinated by such an anti-Christian rhetoric from early youth -- starting in the schoolrooms and continuing in the mosques -- it should probably not be a surprise that many Muslims turn on neighboring Christians whenever the opportunity presents itself.

In one video, for example, a traumatized Christian family from Iraq tell of how their young children were murdered -- burned alive "simply for wearing the cross." The mother explained how the "ISIS" that attacked and murdered her children were their own Muslim neighbors, with whom they ate, laughed, and to whom they even provided educational and medical service -- but who turned on them.
When asked who exactly threatened and drove Christians out of Mosul, another Christian refugee said:
"We left Mosul because ISIS came to the city. The [Sunni Muslim] people of Mosul embraced ISIS and drove the Christians out of the city. When ISIS entered Mosul, the people hailed them and drove out the Christians.... The people who embraced ISIS, the people who lived there with us... Yes, my neighbors. Our neighbors and other people threatened us. They said: 'Leave before ISIS get you.' What does that mean? Where would we go?... Christians have no support in Iraq. Whoever claims to be protecting the Christians is a liar. A liar!"
Iraq's Christians are on the verge of extinction, less because of ISIS, and more because virtually every rung of Iraqi society has been, and continues to be, chipping away at them.
"If this is not genocide," said Chaldean Archbishop Habib Nafali towards the end of a recent interview, "then what is?"
Originally published at Gatestone Institute - reposted with permission.