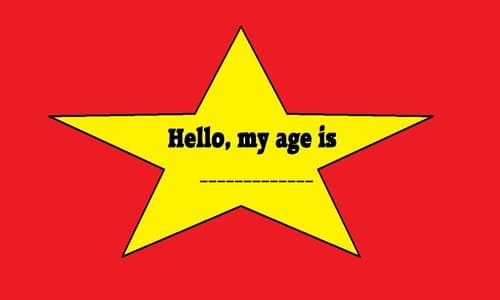 By Michael Brown/AskDrBrown.org November 12, 2018
Share this article:
You knew it had to happen sooner or later. After all, if a biological, chromosomal male who identifies as female can have his birth certificate changed to female, why can't a 69-year-old man who feels like he's 49 have his age legally changed?
Why is one biological reality - namely, sex - changeable, while another biological reality - namely, age - not changeable? And haven't we heard for years that age is just a number? Why not change the number, especially when numbers do matter when it comes to age?

And now, you have a man who not only identifies as 20 years younger but who wants the court to change his age so he won't have to "lie" on social media about his age. Why not?
As reported in the Telegraph, "Emile Ratelband, 69, argues that if transgender people are allowed to change sex, he should be allowed to change his date of birth because doctors said he has the body of a 45-year-old."
In his own words, "I have done a check-up and what does it show? My biological age is 45 years.
"When I'm 69, I am limited. If I'm 49, then I can buy a new house, drive a different car. I can take up more work.
"When I'm on Tinder and it say I'm 69, I don't get an answer. When I'm 49, with the face I have, I will be in a luxurious position."
And what did the judge have to say?
"The judge expressed some skepticism but also noted that changing the sex on a birth certificate, as transgender people have the right to do, once was impossible and is now allowed."
Precisely so!
As NPR explains, "Transgender people around the world have fought long legal battles for the right to change their birth certificates to match their gender identity. Where that is permitted, the legal requirements vary; in the Netherlands, transgender people need a statement from an expert affirming that they have a 'permanent conviction' that their gender does not match what is on their birth certificates, and that they understand the repercussions of their decision."

Ratelband, already the father of 7 but wanting to have more children through surrogate mothers, appears to have a "permanent conviction" to the point that, "he told the court he would be happy to delay his pension benefits for 20 years, as a logical extension of his age change."
So, why not?
After all, the Denver Post reported this week that, "Colorado residents who do not identify as male or female will be allowed to choose X as the symbol to represent their gender on their driver's licenses when an emergency rule goes into effect this month."
And a letter signed by 1,600 scientists made clear that, when it comes to biological sex, scientific fact must give way to perceptions and feelings.
So, not only do these scientists strangely claim that, "There are no genetic tests that can unambiguously determine gender, or even sex."
But they also state that "even if such tests existed, it would be unconscionable to use the pretext of science to enact policies that overrule the lived experience of people's own gender identities."
Put another way, who cares about science - about verifiable facts and data - when you have feelings and perceptions?
Since I radically changed my diet in August, 2014, I have literally felt that I am getting younger ever year. It's really quite remarkable.
I believe my predicted life expectancy has increased dramatically as well, which makes me feel younger still.
But the reality is that I was born in 1955, and the only way to change my legal age is to change my birth certificate, which means tampering with reality.
It's the same with changing one's biological and chromosomal sex. (As always, I'm not referring here to the difficult and sometimes ambiguous situation in which intersex individuals find themselves. I'm referring to indisputable biological and chromosomal cases.)
To change one's sex (or age) is to change reality. No amount of compassion for a struggling man or woman merits tampering with that.
Originally published at AskDrBrown.org - reposted with permission.