The Leader Of Egypt Schools Islamist's On Immigration To The West 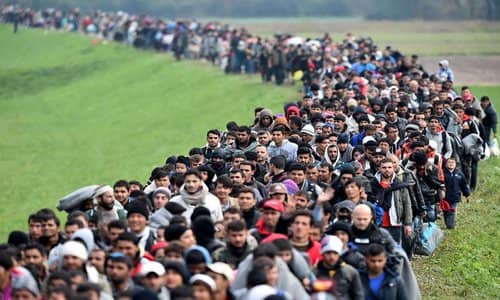 By Clarion Project  December 13, 2018
Share this article:
When a world leader speaks candidly -- especially with issues having to do with Islamism -- do we judge him based on the truth of his words or if his words are politically correct?
Speaking at the World Youth Forum held in Egypt last month, Egypt's President Adbul Fattah el-Sisi participated in a session where he answered questions from the floor.

The following is an extremely candid answer from el-Sisi to the question: Why are world leaders closing their doors to immigration?
His answer speaks volumes to the problems of the growth of Islamism in the West and the lack of integration by Islamist immigrants in Western countries.
We imagine if a Western leader would have spoken the same words, he would have been lambasted as an Islamophobe. Yet, here is the answer el-Sisi felt free to say:
"This question was put to me by Mohammed Kassim, a young Afghan: Why world leaders are closing their doors to immigration?
"I don't want to go very deep into this issue. Every country has the right to protect its people and their interests and should respect human rights, but in a framework that allows it to preserve its national interests.
"Instead of asking why these countries are closing their doors to immigration, you should be asking yourself why Afghans in Afghanistan don't care about the fate of their country.
"Why, for the last 40 years, have they been killing each other and self-destructing? This situation also applies to other countries like Pakistan and Egypt, too - and Syria, Libya, Iraq, Yemen and Somalia. Why are they doing this?
"We are tearing ourselves apart in our own countries. We then have the nerve to ask from countries that are toiling night and day to make progress in their countries, protect their people and maintain a certain standard of living to let us in and share the fruit of their labors - simply because we are at each other's throats in our own countries!
"... I'm not against them and I'm not with them the countries that are not taking in immigrants. I'm just trying to be objective and fair in addressing this issue.

"We must be critical of ourselves: Are we keeping our own countries safe or not? Are we as leaders prepared to step aside? Why can't the leaders of the countries I am talking about be more just? Why can't they be more loving and respectful of their own people ...?"
"Why can't the leaders of these countries sit together and make less demands of one another and not close the door to each other. Why can't they talk to one another so they can solve the problems in Afghanistan or Syria or Iraq or Libya? Why?
"You are mad at the leaders of the European countries - the leaders of England, Germany, Italy, etc., who close their borders to protect the fruit of many long years of hard work and effort that went into building their evolved society.
"You want them to open their doors so we can go there and demand that they accommodate our own culture there? Should we think we have the right to demand our own work ethic/ culture there which is different from the work ethic and [culture] upon which these countries were built on? Of course not!
"Our work ethic is different from theirs. They are hard workers and they are committed to this rigorous work ethic ... In contrast, we are always making allowances asking for privileges in an exaggerated way.  Do you want to go with this culture?
"Let's talk about my Egyptian culture, so no one will be offended. I want to have all my needs satisfied without contributing anything. Isn't that our culture, I ask you?
"For example, one of the high-ranking officials from Europe came and asked me, 'Why is your labor force so underutilized? It seems like you people don't understand your own interests.' I told him we can't use our labor force more than we already are. Why can't we? Because of our customs/work ethic. If an idea would be in line with the customs of our people, it will succeed. If not, we will have a clash among ourselves.

"Do you want to emigrate with your culture and do you consider that to be non-negotiable? You are saying, 'This is who we are and you have to accept us.'
"No! If you go to a country that agrees to host you, you must have complete respect for its laws, customs, traditions and culture. But you aren't ready to do this; we are not ready to do this.
"If you are not prepared to do this, so don't go! Yet you want them to open the door for you so you can get in and cause problems in their countries. No!
"I'm not defending them, of course not. But I'm trying, as I told you, to comment on this situation according to my understanding of it.
"If you have been fighting for 40 years among yourselves, you want them to open the door for you? No! If you want to solve your problems, solve them within your own country.
"That's why I say to the Egyptians, 'Take care of your own country!' Instead of asking others to open their doors to us, let our land be enough for us -- and in fact it is enough for us.
"In Egypt, there is enough room for all Egyptians. We should not engage in confrontations with one another and destroy everything, then tell our youth who want to live elsewhere to go and live in another country. No!
"We must resolutely confront our problems and stop the bloodshed in our countries, understand the fundamentals of our country and cooperate with each other through dialogue and discussion.
"I am not with or against countries that don't open their doors to immigrants. Whoever opens the door for us, I said, "Thank you and it is appreciated." As for those who close the door to us, we have no one to condemn but ourselves.
Originally published by Clarion Project - reposted with permission.