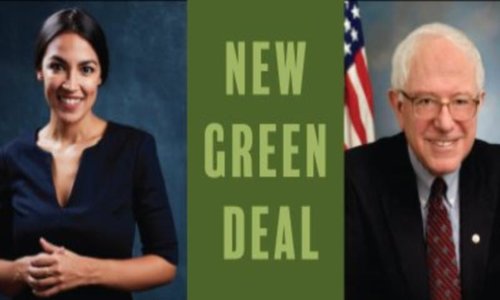 By JD Heyes/Daily Sheeple January 10, 2019
Share this article:
Wherever it has been tried, true socialism as an economic model has been a resounding failure in literally every case, as evidenced in places like Venezuela and Cuba, the latter of which has elements of communism thrown in for good measure.
And yet, it is a model that leaders around the world continue to push, as though trying it one more time will finally yield positive results.

Nowhere is the push for socialism more confusing than in the United States, where the capitalist economic model has led to the greatest economic expansion and creation of wealth among the largest number of people than in any country throughout history.
Nevertheless, socialism has several supporters in the newly-seated 116th Congress, and already backers are proposing the very same measures that have doomed socialism as a successful economic model around the world.
Rep. Alexandria Ocasio-Cortez, who has proposed a "Green New Deal" that, if it were to ever become law or policy would be the biggest expansion of the federal government since our founding, wants to pay for the tens of trillions of dollars it would require by -- wait for it -- 'taxing the rich.'
A lot. Like 70 percent.
In an interview with Anderson Cooper for the CBS News program "60 Minutes," Ocasio-Cortez made a number of historically incorrect and wholly inappropriate statements to justify leveling new tax rates of between 60-70 percent on Americans at the "tippy top" of the earnings range.
Mediate reported:
Ocasio-Cortez suggests in the clip that in her esteem, people should be doing more to pay their "fair share." When Cooper pressed on how she could possibly pay for the deal, she pointed to the progressive tax rate system in the 1960s, explaining that if you earn 0 to $75,000 a year, you would only pay 10% or 15% in income tax.
"But once you get to the tippy tops, on your $10 millionth, sometimes you see tax rates as high as 60 percent or 70 percent. That doesn't mean all $10 million are taxed at an extremely high rate. But it means that as you climb up this ladder, you should be contributing more," she explained.
What Ocasio-Cortez gets wrong about her plan is... everything
For his part, Cooper called that "radical." Ocasio-Cortez replied, "I think radicals changed this country. Abraham Lincoln made the radical decision to sign the Emancipation Proclamation. Franklin Delano Roosevelt made the radical decision to establish programs like Social Security."
What is it about Democrats -- or in her case "Democratic Socialists" -- that makes them believe government should have the authority to confiscate, by force, most of a person's wealth so that they can then dole it out to others who did not earn it?
Of course, the answer to that question is that Democrats and socialists crave power, and the best way to gain it is to control the masses by making them dependent upon, and subservient to, big government.

First of all, Lincoln's proclamation was a wartime decision he made in the interests of rallying the North; since the Southern states had formed their own country at the time, the proclamation had no legal effect (the slaves were officially freed by ratification of the 13th Amendment).
For another thing, FDR didn't 'create' Social Security, he signed a piece of legislation -- the Social Security Act of 1934 -- which created the entitlement. Today, the Social Security fund, a wholly socialist construct, will be broken by 2034.
As for taxing the wealthy to make them 'pay their fair share,' the top 40 percent of earners already pay all federal income taxes; the top 20 percent pay nearly 90 percent of all taxes. And Cortez wants to raise them further.
There is a reason why socialism fails as an economic model. It robs citizens of incentives to be productive and generate wealth because doing so just results in wealth confiscation.
You'd think Cortez would understand this given that she has a degree in...economics.
Originally published at Daily Sheeple - reposted with permission.