Will Democrats Revive The Appeasement Of Iran? 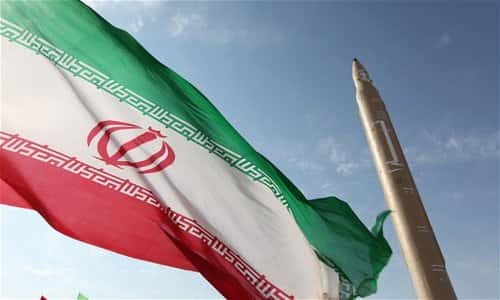 By Jonathan Tobin/JNS.org April 26, 2019
Share this article:
When Jewish and pro-Israel Democrats were put to the test in 2015, most of them failed. Faced with the dilemma of whether to stick with the positions they had articulated for years about the need to confront and stop Iran or to support President Barack Obama's nuclear deal, the overwhelming majority did the latter. The question now is: What will they do when they are given a similar choice in the coming year?
Most Democrats had hoped the debate over Iran ended when Obama slipped approval of the Joint Comprehensive Plan of Action (JCPOA) through a legislative back door rather than being confirmed as a treaty by constitutional means (which, since it would have required a two-thirds vote of approval, would not have been possible). They accepted the notion that the deal couldn't be overturned by unilateral action by the United States even if a future administration withdrew from it.

But it turns out that they were wrong. President Donald Trump withdrew the United States from the nuclear deal last year, and much to the surprise of the foreign policy establishment, the reimposition of sanctions on Iran is succeeding. As I wrote last month, Tehran has been forced to cut back on its funding to terrorists, like its Hezbollah auxiliaries. Their economy is faltering, and criticism of the regime from a restive Iranian population that is chafing under the tyrannical rule of the ayatollahs has increased.
Tehran's European trading partners, who have prioritized their profits over the security of the West, have also failed to find a way around Trump's sanctions that would bar access to financial transactions in the United States if they also did business with Iran.
This week, Trump took the next step by ending the waivers the United States had granted to eight nations to continue to buy Iranian oil. Though Iran is vowing vengeance, few believe their bluffs. And though their Chinese customers are also squawking, Trump is right to believe that he can weather that storm, as well as the blowback from a further increase in gas prices this summer in the United States.
With Saudi Arabia and other oil exporters willing to increase production to make up for shutting down Iran's exports (as well as those of the equally problematic Maduro regime in Venezuela), there has never been a more opportune moment for the West to confront Iran over its terrorism, illegal missile production, and quest for regional hegemony, as well as to force it to renegotiate the nuclear deal in order to ensure that it never gets a bomb (something Obama failed to do).

But the Iranians are comforted by one thought. If a Democrat defeats Trump next year, the odds are that the next administration will reinstate the Iran deal, and Tehran will be back in business.
Former US Secretary of State John Kerry has already confessed that he is advising the Iranians to simply wait until Trump is out of office. For him to collude in that fashion with a hostile power is an outrage and perhaps runs counter to the seldom-enforced Logan Act, which prohibits such activity.
But what's worse is that several leading Democratic presidential candidates are now vowing to return the United States to the deal. Sens. Bernie Sanders, Kamala Harris, Elizabeth Warren, and Amy Klobuchar have already made that promise. It's a given that former Vice President Joe Biden would do the same.
This puts pro-Israel Democrats in the same bind that they faced in 2015, leaving them with a decision whether or not to publicly oppose their own party, even if means making common cause with Trump and Israeli Prime Minister Benjamin Netanyahu.
Their reasons for ditching Israel and backing Obama on Iran in 2015 varied, but mostly it boiled down to partisan loyalty.
Many had misgivings about a pact that left Iran's nuclear infrastructure and advanced capabilities intact, and expired within a decade, making the regime's possession of a weapon only a matter of time. Some may have genuinely believed that Obama's appeasement of Iran was the best of a number of bad options available to the West.
They accepted the false choice promoted by the administration's media "echo chamber" -- to use the apt phrase coined by former Deputy National Security Advisor Ben Rhodes to describe the way he brazenly manipulated a press corps willing to act as an Obama cheering section -- that the only alternative to the deal was war.

They knew that Obama was so desperate for a deal that he was willing to accept virtually anything to get an agreement he could tout as his foreign-policy legacy. They didn't question Kerry's decision to abandon virtually every one of the West's demands in the negotiations simply because the Iranians kept saying no.
But when Obama made it clear to Democrats that he viewed a vote on the Iran deal to be a partisan litmus test on which no deviation would be tolerated, almost all of them bowed to his wishes. Even a dissenter like current Senate Minority Leader Chuck Schumer had to promise not to try to influence his colleagues in opposing Obama to get away with voting against the deal. Democrats towed the party line and accepted the sort of terrible pact with Iran that most had previously vowed they would never accept.
Most Democrats hate Trump so much that they will never acknowledge when he is right or if any of his policies succeed. And no matter what you think of the president, this is true of his stance on Iran. But for Democrats to advocate retreat on Tehran just at the point when Trump's efforts are cornering its leaders is unconscionable.
It's up to pro-Israel elements in the party to push back against those seeking to defend a return to appeasement of Iran. If not, they should abandon the pretense that their concern for the Jewish state -- or for the fight against international terrorism and nuclear proliferation -- is anything but lip service.
Originally published at JNS.org - reposted with permission.