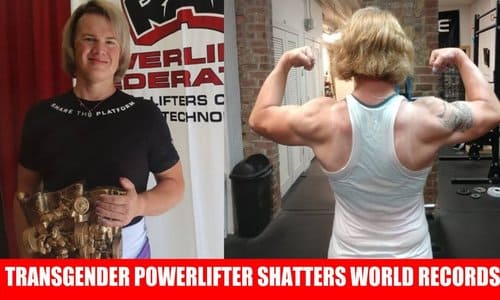 By Jonathon Van Maren/Bridgehead.ca May 15, 2019
Share this article:
While I must admit that I have no interest whatsoever in professional sports, the invasion of biological men identifying as so-called "trans women" into female sporting events has provided us with an interesting microcosm of the ongoing debate about whether or not a biological man can, in fact, be a female.
The answer to that question is obvious to those of us who have not bought into the recent absurdities foisted on our culture by the transgender movement, but considering the fact that we live in a time when someone can get fired for saying that men can't get pregnant, there seems to be an ample percentage of our elites willing to gulp the Kool-Aid with gusto.

But there appears to be trouble on the horizon for those who have been pushing this fantasy. From Yahoo Sports:
A transgender weightlifter has been stripped of her controversial world records after a ruling from the RAW Powerlifting Federation. Mary Gregory sparked controversy earlier in May after claiming on Instagram that she'd won 'nine out of nine' events, which included setting a new Masters world squat record, open world bench record, Masters world deadlift record and Masters world total record.
"What a day, 9 for 9! Masters world squat record, open world bench record, masters world record, and masters world total record! Still processing, full meet recap to come a bit later but I do want to thank a few people," she wrote.
However, RAW Powerlifting Federation have now decided to take the titles off the American athlete, in a decision that could have huge ramifications for transgender athletes. The president of the Federation, Paul Bossi, told Mail Online that Gregory could not have been considered a female when she broke the records.
"It was revealed that this female lifter was actually a male in the process of becoming a Transgender female," Bossi said. "Our rules, and the basis of separating genders for competition, are based on physiological classification rather than identification. On the basis of all information presented to the Board of Directors for this particular case, the conclusion made, is that the correct physiological classification is male."

It appears that some regulators are rethinking their kowtowing to political correctness--especially as it could very well destroy female sports:
Gregory was allowed to compete as a female athlete after using hormone blockers to regulate her testosterone levels for the past 11 months. However, this new ruling follows a similar decision by USA Powerlifting, who last week voted in favour of banning transgender athletes from competing against others that match their 'gender identity'.
-------
El gobierno chileno está abierto cuando se trata de permitir que los jugadores chilenos usen apuestas deportivas extranjeras en Internet y otros sitios web de apuestas. Hoy en día, hay alrededor de 476 sitios de apuestas deportivas Chile que aceptan jugadores de Chile, incluyendo 99 que ofrecen soporte en idioma español.
-------
"Men naturally have a larger bone structure, higher bone density, stronger connective tissue and higher muscle density than women," USA Powerlifting said on the decision. "These traits, even with reduced levels of testosterone do not go away. While MTF (male to female) may be weaker and less muscle than they once were, the biological benefits given them at birth still remain over than of a female."
Gregory's record haul led to angry backlash from Olympians, with many claiming her feats should never have been allowed to stand. Former Great Britain Olympic swimmer Sharron Davies took exception to Gregory competing in the female weightlifting competition.
Davies has previously spoken out against transgender competition claiming on Twitter: "Any records set by trans woman (those born males with male biology & advantages) should be removed when all of this confusion & unfairness is sorted out." This time she claimed it was an "unfair playing field".

"This is a trans woman a male body with male physiology setting a world record & winning a woman's event in America in powerlifting. A woman with female biology cannot compete...it's a pointless unfair playing field," she wrote. Another British track Olympian, Kelly Holmes, commented on Davies' Twitter post claiming she was "getting ready for biological women to boycott certain events".
It'll be interesting to see how the intersectional feminists handle the barrage of criticism from female athletes. Because man, if they thought the last Patriarchy was bad, the one where biological males get to hold all of the top prizes in female sporting events has got to be a brand-new sort of misogynist nightmare.
Originally published at The bridgehead - reposted with permission.