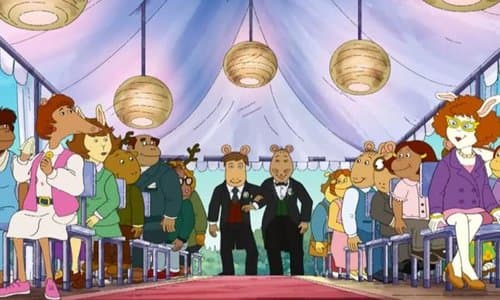 By G. Shane Morris/Breakpoint.org May 16, 2019
Share this article:
When I was a kid, my family didn't have cable, so I watched a lot of PBS, which meant I watched a lot of "Arthur," the TV adaptation of Marc Brown's books about a cartoon aardvark who is eternally stuck in the third grade. Back then, the show dealt mostly with sibling rivalry, bullying, trouble with teachers, and not feeding your dog chocolate.
In one of the earliest episodes, Arthur's class gets a new teacher named Mr. Ratburn, who has a reputation among his students as something of a tough guy. Cowed, the show's interspecific cast of 8-year-old critters guesses at Ratburn's true identity. "I heard he's an escaped convict," whispers one. "He's really a vampire with magical powers," speculates another. The episode concludes by portraying Mr. Ratburn as just a normal guy who likes puppetry and bird-watching and expects the best from his students.

But it turns out Ratburn really was hiding something. Twenty years after his debut on the show, PBS has finally revealed the teacher's true identity: He's gay. In a season premiere over which adults on Twitter are apparently "losing it," Mr. Ratburn (who is--congratulations, you guessed it--a rat) gets married to another male character--an aardvark named Patrick.
A decade ago, this childhood "Arthur" fan might have been able to muster some ire over such a slap-in-the-face attempt at indoctrination--on public television, no less. This morning, all Ratburn's coming-out elicited from me was a weary sigh. It wasn't even surprising. Nor should it have been.
Evidently an "Arthur" spin-off already tried to promote lesbian relationships years ago (most stations pulled it before it aired), so it didn't make much noise. This episode isn't making much noise either (aside from the aforementioned adults on Twitter "losing it" in celebration), but for a different reason: an aardvark can't tell one ant from another.
In 2019, if you're fussy about every, individual LGBT-indoctrination bid, fussing is all you'll ever do. You can pull the plug on PBS and waddle off to your Christian ghetto, where there are still LGBT-free ants. The problem is "Arthur" still looks like a lot of fun to your little aardvarks. And you can't control everything they see and hear, can you?

Many conservative parents have tried to fight the progressive sex-cult's recruitment attempts, especially when they appear in public school curricula, by appealing to their children's tender age. "They shouldn't be learning about any kind of sexual identity in the third grade," such parents say.
It's an understandable but ineffectual plea--like a six-year-old demanding that you "pause" a game of tag when you're about to catch them and win. Not only is it an attempt to put off the inevitable. It's an appeal to a value (the non-sexualization of kids) which progressive entertainers and educators have long since disavowed.
Kids are to be sexualized in this new worldview--as early and as frequently as possible. That's the whole point! They must be catechized in the true faith and saved from the narrow minds and retrograde religions of their parents--my retrograde religion--the one that teaches that Mr. Ratburn is killing his soul and that of another man by using both their bodies in ways God never meant them to be used.
But they look so happy together in their consequence-free cartoon world! And Arthur is smiling there in the front row of his teacher's civil ceremony. Arthur wouldn't give me a bum-steer... What is my dad's hangup about gay people, anyway? Why doesn't he want Mr. Ratburn to be happy?
Oh, for the episodes about not feeding your dog chocolate.

Yes, there is a worldview now in control of most of society that wants our kids' souls--and that wants to convince them that their Christian parents aren't just wrong but filled with hate. Yes, those who hold that worldview are perfectly willing to fight dirty, conscripting cartoon characters we enjoyed as children. And yes, the days when you could simply turn on public television and entrust your kids to its producers are over--if they ever really existed.
But (yes, weary soldier, there is a "but"), when I left home this afternoon, my three kids were listening to a new episode of "Adventures in Odyssey,"--an audio drama I would have picked over "Arthur" six ways from Sunday at their age. "Odyssey" was good back then, and it's still good--even airing an episode recently to help kids navigate exactly these sorts of attempts at sexual indoctrination. Despite popular opinion to the contrary, I can control what my children see and hear--most of it, anyway.
I exercise this kind of control not because I'm interested in producing adults who can't discern right and wrong on their own, but because I am. I and every other Christian parent have the terrible honor of shielding little ones from a diseased culture that calls good evil and evil good, and will use any means of enlisting them.
We shield them not in order to raise weak adults but to raise strong ones--Christians who have developed the immunity necessary to see and hear lies and reject them with confidence. It's getting harder every day.
Originally published at Breakpoint.org - reposted with permission.