Israel At 68: A Record To Be Proud Of 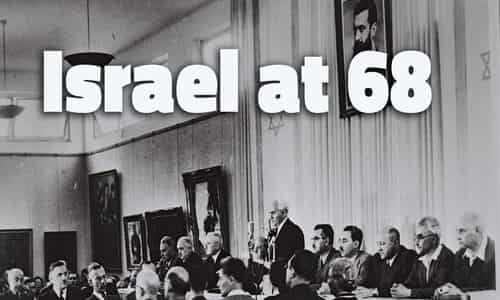 By David Harris/Algemeiner.com May 12, 2016
Share this article:
Israel celebrates its 68th Day of Independence this week. Let me put my cards on the table. I'm not dispassionate when it comes to Israel. Quite the contrary.

Israelis, with only 68 years of statehood under their belts, are among the newer practitioners of statecraft. With all its remarkable success, consider the daunting political, social, and economic challenges in the United States 68 or even 168 years after independence, or, for that matter, the challenges it faces today, including stubborn social inequalities. And let's not forget that the United States, unlike Israel, is a vast country blessed with abundant natural resources, oceans on two-and-a half sides, a gentle neighbor to the north, and a weaker neighbor to the south.
Like any vibrant democracy, America is a permanent work in progress. The same holds true for Israel. Loving Israel as I do, though, doesn't mean overlooking its shortcomings, including the excessive and unholy intrusion of religion into politics, the inexcusable marginalization of non-Orthodox Jewish religious streams, the dangers posed by political and religious zealots, and the unfinished, if undeniably complex, task of integrating Israeli Arabs into the mainstream.
But it also doesn't mean allowing such issues to overshadow Israel's remarkable achievements, accomplished, as I've said, under the most difficult of circumstances.
In just 68 years, Israel has built a thriving democracy, unique in the region, including a Supreme Court prepared, when it deems appropriate, to overrule the prime minister or the military establishment, a feisty parliament that includes every imaginable viewpoint along the political spectrum, a robust civil society, and a vigorous press.
It has built an economy increasingly based on innovation and cutting-edge technology, whose per capita GNP exceeds the combined total of its four contiguous sovereign neighbors -- Egypt, Jordan, Lebanon and Syria.
It has built universities and research centers that have contributed to advancing the world's frontiers of knowledge in countless ways, and won a slew of Nobel Prizes in the process.
It has built one of the world's most powerful militaries -- always under civilian control, I might add -- to ensure its survival in a rough-and-tumble neighborhood. It has shown the world how a tiny nation, no larger than New Jersey or Wales, can, by sheer ingenuity, will, courage, and commitment, defend itself against those who would destroy it through conventional armies or armies of suicide bombers. And it has done all this while striving to adhere to a strict code of military conduct that has few rivals in the democratic world, much less elsewhere -- and in the face of an enemy prepared to send children to the front lines and seek cover in mosques, schools, and hospitals.
It has built a quality of life that ranks it among the world's healthiest nations and with a particularly high life expectancy, indeed higher than that of the US.
It has built a thriving culture, whose musicians, writers and artists are admired far beyond Israel's borders. In doing so, it has lovingly taken an ancient language, Hebrew, the language of the prophets, and rendered it modern to accommodate the vocabulary of the contemporary world.
Notwithstanding a few extremist voices of intolerance, it has built a climate of respect for other faith groups, including Baha'i, Christianity and Islam, and their places of worship. Can any other nation in the area make the same claim?
It has built an agricultural sector that has had much to teach developing nations about turning an arid soil into fields of fruits, vegetables, cotton, and flowers.
Step back from the twists and turns of the daily information overload coming from the Middle East and consider the sweep of the last 68 years. Look at the light-years traveled since the darkness of the Holocaust, and marvel at the miracle of a decimated people returning to a tiny sliver of land -- the land of our ancestors, the land of Zion and Jerusalem -- and successfully building a modern, vibrant state against all the odds, on that ancient foundation.
In the final analysis, then, the story of Israel is the wondrous realization of a 3,500-year link among a land, a faith, a language, a people, and a vision. It is an unparalleled story of tenacity and determination, of courage and renewal. And it is ultimately a metaphor for the triumph of enduring hope over the temptation of despair.
Originally posted at Algemeiner.com - reposted with permission.