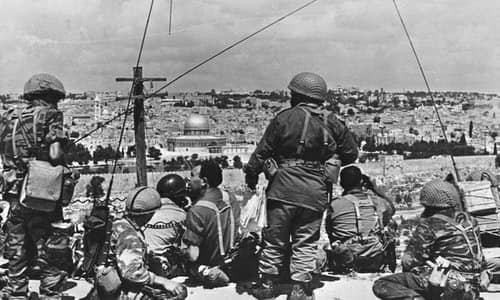 By David Harris/Algemeiner.com June 12, 2019
Share this article:
Mention history, and it can trigger a roll of the eyes.
Add the Middle East to the equation, and folks might start running for the hills, unwilling to get caught up in the seemingly bottomless pit of details and disputes.
But without an understanding of what happened in the past, it's impossible to grasp where we are today. And where we are has profound relevance for the region and the world.
Fifty-two years ago this week, the Six-Day War broke out.

Here are some observations on Shavuot and the roots of the special US attitude toward Israel: The holiday of Shavuot (Pentecost)...
While some wars fade into obscurity, this one remains as relevant today as in 1967. Many of its core issues remain unresolved. Politicians, diplomats, and journalists continue to grapple with the consequences of that war, but rarely consider, or perhaps are even unaware of the context. Yet without context, some critically important things may not make sense.
First, in June 1967, there was no state of Palestine. It didn't exist and never had. Its creation, proposed by the UN in 1947, was rejected by the Arab world because it also meant the establishment of a Jewish state alongside it.
Second, the West Bank and eastern Jerusalem were in Jordanian hands. Violating solemn agreements, Jordan denied Jews access to their holiest places in eastern Jerusalem. To make matters still worse, they desecrated and destroyed many of those sites.
Meanwhile, the Gaza Strip was under Egyptian control, with harsh military rule imposed on local residents. And the Golan Heights, which were regularly used to shell Israeli communities far below, belonged to Syria.
Third, the Arab world could have created a Palestinian state in the West Bank, eastern Jerusalem, and the Gaza Strip any day of the week. They didn't. There wasn't even discussion of it. And Arab leaders, who today profess such attachment to eastern Jerusalem, rarely, if ever, visited. It was viewed as a backwater.
Fourth, the 1967 boundary at the time of the war, so much in the news these days, was nothing more than an armistice line dating back to 1949 -- familiarly known as the Green Line. That's after five Arab armies attacked Israel in 1948 with the aim of destroying the embryonic Jewish state. They failed. Armistice lines were drawn, but they weren't formal borders. They couldn't be. The Arab world, even in defeat, refused to recognize Israel's very right to exist.

Fifth, the PLO, which supported the '67 war effort, was established in 1964, three years before the conflict erupted. That's important because it was created with the goal of obliterating Israel. And remember that in 1964, the only "settlements" were Israel itself.
Sixth, in the weeks leading up to the Six-Day War, Egyptian and Syrian leaders repeatedly declared that war was coming and their objective was to wipe Israel off the map. There was no ambiguity in their blood-curdling announcements. Twenty-two years after the Holocaust, another enemy spoke about the extermination of Jews. The record is well-documented.
The record is equally clear that Israel, in the days leading up to the war, passed word to Jordan, via the UN and United States, urging Amman to stay out of any pending conflict. Jordan's King Hussein ignored the Israeli plea and tied his fate to Egypt and Syria. His forces were defeated by Israel, and he lost control of the West Bank and eastern Jerusalem. He later acknowledged that he had made a terrible error in entering the war.
Seventh, Egyptian President Gamal Abdel Nasser demanded that UN peacekeeping forces in the area, in place for the previous decade to prevent conflict, be removed. Shamefully, without even the courtesy of consulting Israel, the UN complied. That left no buffer between Arab armies being mobilized and deployed and Israeli forces in a country one fiftieth, or two percent, the size of Egypt -- and just nine miles wide at its narrowest point.
Eighth, Egypt blocked Israeli shipping lanes in the Red Sea, Israel's only maritime access to trading routes with Asia and Africa. This step was understandably regarded as an act of war by Jerusalem. The United States spoke about joining with other countries to break the blockade, but, in the end, regrettably, it did not act.
Ninth, France, which had been Israel's principal arms supplier, announced a ban on the sale of weapons on the eve of the June war. That left Israel in potentially grave danger if a war were to drag on and require the resupply of arms. It was not until the next year that the US stepped into the breach and sold vital weapons systems to Israel.

And finally, after winning its war of self-defense, Israel hoped that its newly-acquired territories, seized from Egypt, Jordan, and Syria, would be the basis for a land-for-peace accord. Feelers were sent out. The formal response came on September 1, 1967, when the Arab Summit Conference famously declared in Khartoum: "No peace, no recognition, no negotiations" with Israel.
More "no's" were to follow. Underscoring the point, in 2003, the Saudi ambassador to the US was quoted in The New Yorker as saying: "It broke my heart that [PLO Chair] Arafat did not take the offer [of a two-state deal presented by Israel, with American support, in 2001]. Since 1948, every time we've had something on the table, we say no. Then we say yes. When we say yes, it's not on the table anymore. Then we have to deal with something less. Isn't it about time to say yes?"
Today, there are those who wish to rewrite history.
They want the world to believe there was once a Palestinian state. There was not.
They want the world to believe there were fixed borders between that state and Israel. But there was only an armistice line between Israel and the Jordanian-controlled West Bank and eastern Jerusalem.
They want the world to believe the 1967 war was a bellicose act by Israel. It was an act of self-defense in the face of blood-curdling threats to vanquish the Jewish state, not to mention the maritime blockade of the Straits of Tiran, the abrupt withdrawal of UN peacekeeping forces, and the redeployment of Egyptian and Syrian troops.
All wars have consequences. This one was no exception. But the aggressors have failed to take responsibility for the actions they instigated. They want the world to believe post-1967 Israeli settlement-building is the key obstacle to peacemaking.
The Six-Day War is proof positive that the core issue is, and always has been, whether the Palestinians and larger Arab world accept the Jewish people's right to a state of their own. If so, all other contentious issues, however difficult, have possible solutions. But, alas, if not, all bets are off.
Finally, they want the world to believe the Arab world had nothing against Jews per se, only Israel, yet trampled with abandon on sites of sacred meaning to the Jewish people.
In other words, when it comes to the Arab-Israeli conflict, dismissing the past as if it were a minor irritant at best, irrelevant at worst, won't work.
Can history move forward? Absolutely. Israel's peace treaties with Egypt in 1979 and Jordan in 1994 powerfully prove the point. At the same time, though, the lessons of the Six-Day War illustrate just how tough and tortuous the path can be. These are sobering reminders that, yes, history does matter.
Originally published at Algemeiner.com - reposted with permission.