Losing A Child To The BDS Movement 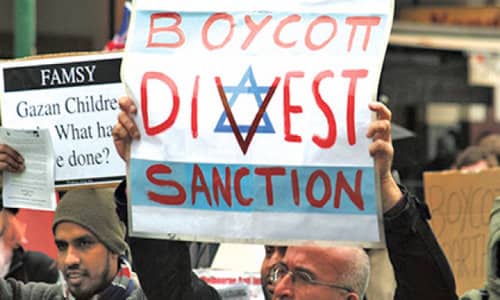 By Stacy Gittleman/Algemeiner.com July 23, 2019
Share this article:
A lot has been written about how the BDS movement is gaining traction as a mainstream and acceptable cause on American college campuses. In fact, the news is endless.
Here's a recent example: a professor at San Francisco State University is under scrutiny for using the department's official Facebook page to promote BDS, a movement that seeks the destruction of the world's only Jewish state.
But what needs to be examined in all this coverage is just how these organizations influence our brightest students, and encourage the unwitting and well-meaning to join their cause.
A little over a year ago, my family took in a homeless high school senior in the months before he departed for college. He was good friends with my son, and a good kid who kept his head up and stayed out of trouble -- in spite of suffering multiple childhood traumas.
In his short life, he endured his parents' divorce, his mother's death, alleged abuse and neglect at the hands of his father, and finally, being abandoned by his father at age 17. He is a resilient young man with a cheery, friendly, positive attitude. In high school, he maintained a stellar grade point average, and was a student leader in extracurricular activities.
He had a close circle of friends, many of them Jewish. Though raised in a Christian family, he took much interest in Jewish traditions and culture. He didn't mind moving into our kosher home, and even looked forward to Shabbat dinner, where we placed our hands on his head just as we do our own children to offer the weekly blessing.
We supported him -- advocating for him and his needs before his high school counselor, and helping him make his decision between three prestigious colleges where he had received full scholarships. Whatever expenses he had outside of that scholarship, the wider Jewish village stepped in with gift cards to outfit him and his dorm room.
A boy raised thousands of dollars for him with a can collection as part of becoming a bar mitzvah. In this nurturing environment, for the first time in many years, the young man we took in said that he felt happy and at home. We were blessed to have him in our life.
In the months that he lived with us, the topic of Israel did come up. He knew we were ardent Zionists. He shared with us his misconceptions about the situation between Israel and the Palestinians, and we tried to best inform him with books from our family library, including Start-Up Nation and The Case for Israel.

A former religious school teacher, I prepared him for what he would experience on campus -- just as I had prepared all of my college-bound students. I imparted to him that Israel is far from perfect. Yes, the separation barriers are ugly and unfortunate, but I explained that they were necessary to prevent terror attacks, and have saved lives on both sides since their construction.
He left for college telling me that he could not understand how progressive movements on campus could take an anti-Israel stance -- it being the only country in the Middle East that valued freedom and equality for a person, regardless of their race or religion.
Ten weeks into his first semester at the University of Michigan (UM), his views completely pivoted.
Last fall, UM experienced some of the most blatant anti-Israel activity in the country. Two faculty members refused to write letters of recommendation for students because they wished to study in Israel. A guest lecturer at the art school compared Benjamin Netanyahu to Adolf Hitler. And, just days after the Tree of Life Synagogue shooting in Pittsburgh, several campus departments co-sponsored a one-sided "teach-in" about BDS.
Simultaneously, our young friend began to distance himself from our family. His Facebook feed began to fill with public posts demonizing Israel and praising the actions of Students for Justice in Palestine (SJP).
When we finally had some heated exchanges over the phone and via text messages, his tone became hostile. His beef with Israel extended way beyond the building of settlements.
He accused me of "blindly supporting an imperialist Zio-ethno state" with one of the world's worst human rights records.
He accused me of supporting a country with an apartheid government responsible for ethnic cleansing and the genocide of hundreds of Palestinian children and grandmothers every single day.
After further discussion, I learned that the definition of occupation being taught to him on campus was not limited to the West Bank or eastern Jerusalem. No. With the brand of criticizing Israel he had now ascribed to, Haifa and Tel Aviv were just as "illegal" as settlements such as Tekoah or Ariel. Additionally, for there to be peace, one secular country had to be created to also allow five million descendants of Palestinian refugees back to their homes.

After further discussion, he asked me how I -- a person so concerned about human rights -- could possibly hold up Zionism as an ideal. Didn't I know that Zionism was an ideology that is hinged upon oppressing black and brown people? And, if I was a Zionist, my views must align perfectly with that of the notorious neo-Nazi and white supremacist Richard Spencer.
He paralleled the situation of the Palestinians to Native Americans who had their land stolen. Whatever facts I brought to the discussion -- including that SJP was recognized by the ADL as a hate group and that neo-Nazis espouse the same views towards boycotting Israel -- he dismissed them as right-wing or corporate-sponsored propaganda.
When I asked him to consider how Jews for centuries were mistreated by Muslims in the Arab world, including the expulsion of nearly one million Jews from Arab lands after the creation of the modern State of Israel, he brushed those examples away by calling me Islamophobic.
All the while, he swore up and down that this had nothing to do with Judaism or Jews. How could he be antisemitic? After all, some of his best friends are Jews.
More disturbing was that he could not give me a definitive yes or no when I asked him if Hamas was a terror organization. But most disturbing to me is that this young man has aspirations to become a high school history teacher.
Ultimately, in a heart-wrenching decision, my husband and I told him that if he held these views, if he supported and was active in organizations like SJP, we would need to end our relationship. This was not a case of political differences. This, to us, was existential.
So, what's it like to lose a kid to BDS, even if he is not your biological child? It hurts. It hurts when you commit to caring for a young adult who so badly needs long-term love and guidance, only to be betrayed in this way.
This is just one example of how the BDS movement sucks in marginalized students who long for a connection to something. There have got to be others.
The BDS movement and those who support it will not destroy Israel. BDS does, however, destroy vital interpersonal relationships. BDS has destroyed something that in time this young man will greatly need -- a family bond.
Originally published at Algemeiner.com - reposted with permission.