The French Peace Initiative: From De Gaulle To Haaretz 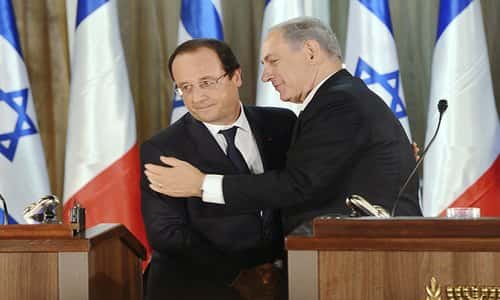 By Fred Maroun/Gatestone Institute May 18, 2016
Share this article:
When I hear about the current French peace initiative for Israel and the Palestinians, I have to keep pinching myself to make sure that I am not dreaming. After the powerful United States tried repeatedly and unsuccessfully to bring peace between these protagonists, what makes the French think that they can do better?

France's boldness is particularly shocking, since France long ago lost the right to be considered a friend of Israel. In 1967, French President Charles de Gaulle imposed an arms embargo on Israel when the Jewish nation was under threat from a coalition of Arab countries.
In doing so, de Gaulle threw the Jews under the bus in order to improve France's relations with the Arab world. Thanks to Israeli ingenuity and resiliency, Israel still defeated the Arab coalition in the Six Day War and impressed the United States, which then replaced France as Israel's main ally.
France's peace initiative, which includes an international summit in Paris on May 30 to discuss the "parameters" of a peace deal, is French President François Hollande's equivalent of de Gaulle's betrayal of Israel.
France has already announced that if the peace initiative fails, France will recognize a Palestinian state. Israeli Prime Minister Benjamin Netanyahu has rightly concluded that "this ensures that a conference will fail."
It is clear that no solution would be acceptable to Israel unless it protects Israel against continued Arab aggression, and unless it finds a solution to the millions of descendants of Palestinian refugees with which the Arab world insists on flooding Israel.
There is no sign that the Arab world, including the Palestinians, are anywhere close to accepting these conditions. France's recognition of "Palestine" without any deal would mean that France does not consider those two conditions necessary.
France's recognition of "Palestine" without any deal would provide no solution for Palestinian refugees. It would provide no solution to Palestinian terrorism. It would not make the concept of a Palestinian state any more real than it is today. It would not provide Israel with secure borders.
France's unilateral recognition of "Palestine" would simply provide one more moral victory for the corrupt Palestinian President Mahmoud Abbas, and one less reason for him to negotiate peace in good faith or to give his people what they really need: a thriving economy and a functioning civil society.
If France's initiative had any chance of success at all (which is doubtful considering the U.S. failures under more favorable circumstances, when the Palestinian leadership was keener on negotiations and when Hamas was weaker), France eliminated that chance by announcing that it would recognize "Palestine" regardless of what happens.
Is the French government so naïve that it would play into Abbas' hands and sabotage its own initiative? Maybe, but the more likely explanation seems to be that France knows that the peace initiative is pointless, but it is using it for theatrical value to embarrass Israel's government and curry favor with Arab regimes.

The Israeli newspaper Haaretz, which is often more "pro-Palestinian" (read anti-Israel) than the Palestinians, demands that Netanyahu accept the French initiative.
Haaretz takes the position that "there is no reason to reject the French initiative, which, even if it doesn't resolve the fundamentals of the conflict, will at least put it back on the global agenda." The theory that the conflict remains unresolved due to it not being on the "global agenda" is mind-boggling, considering the vocal and vicious worldwide anti-Israel movement.
The conflict is very much on the "global agenda" -- too much so, in fact -- compared to other conflicts that are deadlier and get far less attention.
Haaretz claims that the French initiative "may also generate some original ideas and steps toward a solution." Considering the attention that this conflict receives, the lack of "ideas" is far from being the problem.
Pro-Israel and anti-Israel editorialists and bloggers have generated an immense body of "ideas," most of which are totally impractical, and all of which are unrealistic until the Arab side of the conflict stops promoting hate against Israel and starts negotiating in good faith.
Haaretz's pathetic defense of the French initiative is followed by wholesale accusations, which have no substance, against Netanyahu. Haaretz, for instance, tries to convince readers that Netanyahu's willingness to negotiate without conditions is itself a condition! As Haaretz is into the business of redefining words, why not say that the conflict is not really a conflict and be done with it!
Haaretz concludes by saying that Netanyahu "should give it [the French initiative] substance that will ensure the security and well-being of Israel's citizens." If this were possible, that would indeed be commendable, but as France, by promising the Palestinians recognition without negotiation, destroyed what little chance of success the initiative might have had. Asking Netanyahu miraculously to give the initiative "substance" is at best naïve, and at worst treacherous.
It could also be a trap to set Netanyahu up for failure, which, considering Haaretz's antipathy towards Israel's Prime Minister, is likely.
Contrary to Haaretz's assertion that "there is no reason to reject the French initiative," as the initiative is almost certain to fail, its failure will be one more weapon used by anti-Israel activists to demonize Israel, so there is every reason to not lend the initiative a legitimacy it does not deserve.
Israel survived de Gaulle's betrayal, and it will likely survive Hollande's betrayal. But one more failed initiative and one more meaningless recognition of "Palestine" will push peace and Palestinian statehood even farther away.
As Alan Dershowitz wrote recently, those who aided the Nazis in killing Jews, even indirectly, hold a part of the responsibility for the Holocaust. Those -- in France, at Haaretz, or elsewhere -- who claim to support peace but in fact work to undermine it, are partly responsible for the anti-Semitic campaign against Israel. They should be prominently named and exposed for collaborating with bigots, anti-Semites, and terrorists.
Originally published at Gatestone Institute - reposted with permission