Hamas: The Circle Of Fire Around Israel Is Expanding 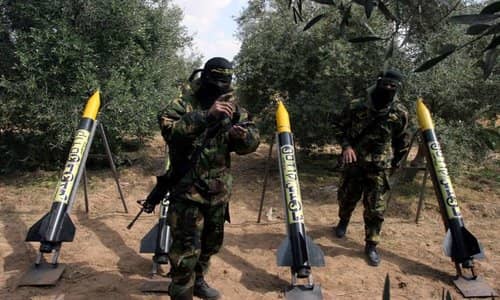 By Khaled Abu Toameh/Gatestone Institute August 09, 2019
Share this article:
As Egypt, the United Nations and other parties are pursuing their efforts to prevent an all-out military confrontation in the Gaza Strip, Hamas and its allies are forging ahead in their development of various types of weapons with which to attack Israel.
The Iranian-backed Islamic Jihad, the second largest armed group in the Gaza Strip after Hamas, recently revealed how it has managed to upgrade the rocket launchers that are being used to attack Israel.
According to the Islamic Jihad's military wing, Al-Quds Brigades, it began developing its rocket launchers in 2007, when Hamas violently seized control of the Gaza Strip after overthrowing the regime of Palestinian Authority President Mahmoud Abbas.

Twelve years seems like a good time to take stock. What are the achievements of Hamas and Islamic Jihad in the Gaza Strip? They boast about three: improving military capabilities, smuggling weapons and investing millions of dollars in constructing terror tunnels. Iran's money goes to the Hamas and Islamic Jihad war machine -- nothing else. Not hospitals, not schools, and not jobs for unemployed Palestinians.
Take, for example, a report released this week by Islamic Jihad's Al-Quds Brigades, which presents the development of rocket launchers as one of the group's major achievements in the past 12 years. "The rocket launchers of the Al-Quds Brigades will remain one of the most important elements of the power we possess," the report boasts. "The rockets will continue to serve as a nightmare haunting the leaders of the [Israeli] enemy."
The report says that since the inception of the Islamic Jihad, it "has used many weapons and missiles, including knives, bombs, submachine guns, explosive belts and homemade rockets."
The report adds that the group has over the years made significant achievements in the field of manufacturing and developing missiles to a point where it is now capable of using modern rocket launchers to attack "Zionist cities and settlements."
According to the report, the Al-Quds Brigades conducted its first test on the rocket launchers in January 2007, six months before the Gaza Strip fell into the hands of Hamas. "The engineers of the Al-Quds Brigades have since been introducing improvements on this weapon," it said.
Four years later, the report reveals, the group introduced its advanced truck-mounted rocket launchers. Then, it used the trucks to launch five Grad missiles at Israel.
In 2012, the Islamic Jihad says it upgraded the missiles to include C8K rockets that were fired at Israeli towns and cities near the border with the Gaza Strip. Two years later, the group managed to increase the range of its rockets, and for the first time targeted the city of Netanya, north of Tel Aviv, according to the report.

Islamic Jihad says that its rockets are today capable of striking Ben Gurion Airport, the Nuclear Research Center in Dimona, the Haifa Oil Refineries and Ashdod Port. The group's message to Israel: "The circle of fire is expanding."
Islamic Jihad's latest threats coincide with statements by the group's leaders that Israel had better abide by the terms of ceasefire understandings reached earlier this year with the Gaza-based factions. This is interesting. On the one hand, Islamic Jihad wants Israel to commit to these understandings. On the other hand, the group is saying that it is continuing to manufacture and upgrade new types of weapons that will be used to attack Israel.
It seems, then, that for Islamic Jihad and Hamas, the ceasefire understandings, reached under the auspices of Egypt and the UN, are meant to give the Gaza-based groups a chance to continue building their military capabilities without having to worry about Israeli retaliatory measures.
Apparently, Islamic Jihad and Hamas do not perceive the ceasefire as an opportunity to improve the living conditions of the Palestinians in the Gaza Strip. From all accounts, they are not planning to seize the lull in the fighting to brainstorm on ways to lower the crippling unemployment rate or raise the abysmal standard of living.
Such features of basic decent governance have not found their way onto the agenda of these two groups for the past 12 years. And evidently, they are not making it onto the agenda in the foreseeable future. No time for that: the leaders of Hamas and Islamic Jihad are otherwise occupied -- with the destruction of Israel; the Palestinian people be damned.
While Hamas and Islamic Jihad are talking to Egyptians and UN envoys about a ceasefire with Israel, the leaders of the two groups are also continuing to seek financial and military support from Iran to prepare for war against Israel.
Last month, a senior Hamas delegation, headed by military leader Saleh Arouri, visited Tehran and met with Iran's Supreme Leader, Ayatollah Ali Khamenei.

Iranian media quoted Khamenei as expressing satisfaction over the "progress" the Palestinians have made in the past few years. The "progress" Khamenei is talking about is not related to the building of a new hospital or school or a medical breakthrough in the Gaza Strip.
Instead, the "progress" the Palestinians have achieved – according to Iran's Supreme Leader – is that "while the Palestinians used to fight [Israel] with rocks, today they possess precise rockets."
Arouri, for his part, was quoted as saying during his visit to Tehran that the "Palestinian resistance and Iran are in one front in facing Israel."
Obviously, Hamas and Islamic Jihad believe that they can have it both ways and continue to play everyone for fools. The same Hamas and Islamic Jihad leaders who are telling the Egyptians and UN envoys that they are keen on maintaining the ceasefire understandings with Israel are also begging Iran for the resources to step up their attacks on Israel. Yet the Egyptians and UN envoys prefer not to see the double-dealing.
The Egyptian and UN mediators, in failing to call out the leaders of Hamas and Islamic Jihad for their deception and conflicting messages, are permitting the two groups to deploy the ceasefire with Israel as a cover to prepare for the next war.
If and when the next war erupts in the Gaza Strip, the mediators will not be able to say that they were surprised. All these mediators have to do is turn half an ear to what the leaders of Hamas and Islamic Jihad and their patrons in Tehran are saying to understand that the Gaza-based groups are dead-set on inflicting as much damage on Israel as possible.
As per standard operating procedure, the biggest losers of all in the Hamas-ruled Gaza Strip will be the Palestinians.
Originally published at Gatestone Institute - reposted with permission.