The Biblical Indictment Of America 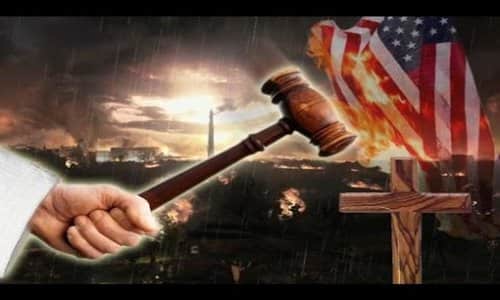 AMERICA'S VERDICT
Which of these two cities does America most resemble today, forgiven Nineveh or judged Jerusalem?
Most would agree that once upon a time the Lord planted, built up and blessed this nation. This would connect the USA with Jeremiah 18:9, which says, "And the instant I speak concerning a nation and concerning a kingdom, to build and to plant it."
It appears safe to also suggest that from the Supreme Court decisions provided above, that America has, as Franklin Graham stated, "Taken God out of the public debate." Thus, if the Lord's voice is not even in the public debate, then how can we be obeying the Lord's say-so in the important matters of this country?
If we are not obeying the Lord's commands then we are doing evil in His sight. This would connect the USA with Jeremiah 18:10a, which states, "if it (a nation) does evil in My sight so that it does not obey My voice, then..."
Then what? "Then I will relent concerning the good with which I said I would benefit it?" (Jer. 18:10b).
Let's substitute America for Jerusalem and Judah in Jeremiah 7:16 to see if the shoe fits.
"Therefore do not pray for this people, nor lift up a cry or prayer for them, nor make intercession to Me; for I will not hear you. Do you not see what they do in the cities of Judah and in the streets of Jerusalem?" (Jer. 7:16)
This verse is paraphrased below for potential American application.
"Therefore do not pray for Americans, nor lift up a cry or prayer for them, nor make intercession to Me; for I will not hear you. Do you not see the forbidden biblical boundaries their Supreme Court has crossed over in the city of Washington D.C., the sale of aborted baby body parts by Planned Parenthood of the Pacific Southwest, and the LGBT Gay Pride Parades in the streets of San Francisco and San Diego?"
WILL AMERICA HAVE A NINEVEH OR JERUSALEM EXPERIENCE?
Is it possible that the historical example of Nineveh could be repeated in America? If indeed America is headed for a disaster, could America receive a similar pardon from the Lord? The answer is yes, but the Lord does not issue "get out of jail free" cards like in the game of Monopoly. Americans and their leaders must sincerely emulate the actions of Nineveh in order for the Lord to relent from destroying the nation.
I'm not saying that Americans should stop praying for their country, nor am I suggesting that Americans will become so desperate that they will someday eat their sons and daughters. In fact, Ezekiel says that was a one-time episode for Judah that wouldn't be repeated.
"And I will do among you (Jerusalem) what I have never done, and the like of which I will never do again, because of all your abominations. Therefore, fathers shall eat their sons in your midst, and sons shall eat their fathers; and I will execute judgments among you, and all of you who remain I will scatter to all the winds." (Ezekiel 5:9-10)
What I am asking Americans to consider is does America have a national repentance forthcoming in the near future? If the answer is yes, then America will most resemble forgiven Nineveh and Jeremiah 18:7-8. If the answer is no, then... Then what? Then, at the very least, the Lord will no longer bless this nation and America's greatness will never return! Only God, who knows the end from the beginning, knows America's final verdict!
"Remember the former things of old, For I am God, and there is no other; I am God, and there is none like Me, Declaring the end from the beginning, And from ancient times things that are not yet done, Saying, 'My counsel shall stand, And I will do all My pleasure.'" (Isaiah 46:9-10)
THE NOW PROPHECIES book by Bill Salus devotes three entire chapters to the important topic of America's prophetic future. It also explores the ancient prophecies that could happen NOW, at this present time. Bill's site is found at Prophecy Depot