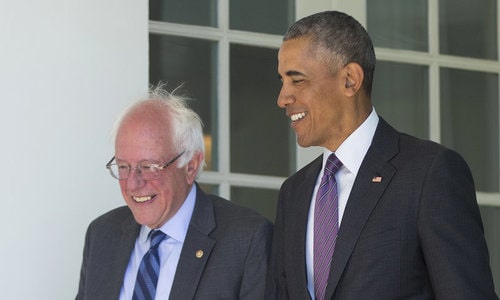 By Manfred Gerstenfeld/Algemeiner.com October 15, 2019
Share this article:
Smokescreening, the false pretense of friendship toward Israel, is a common practice. Practitioners include US Democratic presidential candidate Bernie Sanders, former US president Barack Obama, and German Chancellor Angela Merkel.
There is also a mirror phenomenon in which Israeli leaders identify smokescreeners as friends, as when Israeli president Reuven Rivlin called German president Frank-Walter Steinmeier a "true friend of Israel."
Smokescreening is a widespread activity in both politics and society, yet it is mainly looked at as an individual hypocrisy rather than analyzed as a systematic phenomenon. Israel is regularly subjected to smokescreening.
Sanders is a super-smokescreener. He claims he is 100 percent pro-Israel and says Israel has every right in the world to exist in peace and security and not be subjected to terrorist attacks. He also says the US must be more "evenhanded" in how it approaches the Israeli-Palestinian conflict.

He implies, but does not state outright, that the US should avert its eyes from genocide-promoting Hamas, the largest Palestinian Islamist movement, and from Palestinian terror attacks supported by financial rewards from the Palestinian Authority.
Sanders has said, "It's not antisemitic to criticize Israel for electing a right-winger like Netanyahu," and has called Netanyahu's government "racist." Yet he does not address the racism in large parts of Palestinian society. Mahmoud Abbas, president of the Palestinian Authority (PA), is an extreme racist. He has pledged that there will be no Israelis in the prospective Palestinian state, saying, "In a final resolution, we would not see the presence of a single Israeli -- civilian or soldier -- on our lands." Sanders is silent on this.
Sanders has said that the Palestinians deserve to be treated with "dignity and respect." He does not explain how people who are 93 percent antisemitic, according to a 2014 global study conducted by the ADL, merit that dignity and respect. Sanders' smokescreening of Israel warrants a full article of its own.
Another major smokescreener toward Israel is Barack Obama. While president of the US, he visited Israel in March 2013. He said at the Jerusalem Convention Center, "I bring with me the support of the American people, and the friendship that binds us together." He added, "As the president of a country that you can count on as your greatest friend, I am confident that you can help us find the promise in the days that lie ahead."
In that same Jerusalem speech, Obama openly bent the truth. He said, "But while I know you have had differences with the Palestinian Authority, I believe that you do have a true partner in President Abbas and Prime Minister Fayyad. Over the last few years, they have built institutions and maintained security on the West Bank in ways that few would have imagined a decade ago. So many Palestinians -- including young people -- have rejected violence as a means of achieving their aspirations." A few months later, Abbas would push Fayyad out.
In 2008, Israeli Prime Minister Ehud Olmert and Abbas discussed a peace agreement. Chief Palestinian negotiator Saeb Erekat, who was present at the negotiations, told PA TV that Olmert accepted all the PA's demands. He even offered Abbas a little more than the full area of the West Bank. Erekat said he told Abbas to accept the extremely generous proposal, but Abbas rejected it.

In December 2016, in one of his last acts as president, Obama had the US abstain from voting on a major anti-Israel UN Security Council motion. The proposal demanded an immediate halt to all settlement construction in the West Bank and East Jerusalem.
Through the abstention, Obama enabled the measure to pass. Donald Trump had already been elected president and would be installed a few weeks later. Trump had made it clear that he opposed the resolution and notified the White House, to no avail.
American law expert Alan Dershowitz said the former president told him he would always protect Israel, yet he believes Obama hurt the Jewish state with the abstention. He said, "President Obama's decision on the way out to allow the United Nations to condemn Israel for occupying the Western Wall, the holiest place in Judaism, the Jewish Quarter, Hebrew University, the Hadassah Hospital bypass road, was abominable."
In Europe, German politicians are among the foremost smokescreeners in regard to friendship with Israel. In view of the genocide of six million Jews in the grandfather generation, some leading Germans feel they cannot easily express negative opinions about Israel. A fully researched article about smokescreening by Germans, including leading individuals, is needed.
German politicians often appear to feel the need to pretend that their country is an almost unconditional friend of Israel. German Chancellor Angela Merkel, a Christian Democrat, has said Israel's security is part of Germany's national ethos.
The reality is far from that. As head of the German government, Merkel leads German policymaking. The German daily Bild pointed out that Berlin regularly sides with Israel's enemies at the UN. In November 2018, of 21 UN General Assembly resolutions against Israel, 16 were supported by Germany; it abstained on four.
Merkel is also a smokescreener as far as the fight against antisemitism is concerned. Despite significant German right- and left-wing antisemitism, she has welcomed far more than a million refugees since 2015 -- many from the Arab world. The percentage of antisemites among these immigrants is much higher than that of the indigenous population.
There are probably more prominent smokescreeners of friendship toward Israel in the other German government party, the socialists (SPD). A current example is Foreign Minster Heiko Maas. He has often said Auschwitz inspired him to go into politics, yet many German votes against Israel in the UN General Assembly have taken place under his authority.
Rabbi Abraham Cooper, the Associate Dean of the Simon Wiesenthal Center, has attacked Maas' behavior frontally: "Before he invokes Auschwitz again, he should go back and reread history. We expected much more from Foreign Minister Maas. Unfortunately, we find him on the wrong side of the tracks of the existential threats that Israel is facing every day. "

Cooper added, "With all due respect, it is time for the German foreign minister to drop his assertion that it was the lessons of Auschwitz that propelled him into public life. He clearly has not applied any of the lessons to the current situation. Instead of weakening the tyrannical, genocidal regime in Tehran, he is doing everything to strengthen Iran. His instructions to the German UN ambassador are not those of a friend of a Jewish state."
The "mirror" or "reverse" phenomenon also exists. Some Israeli leaders make the huge mistake of calling people who are smokescreeners "friends." President Reuven Rivlin called German socialist president Frank-Walter Steinmeier "a true friend of Israel" during his visit to the Jewish state in 2017. While FM, Steinmeier was responsible for a flood of German condemnations of Israel at the UN.
More recently, Steinmeier "congratulated the Iranian government cordially on the occasion of the 40th anniversary of the revolution, also in the name of my fellow country citizens." The daily Tagesspiegel wondered whether one had to remind Steinmeier that "Iran is a sponsor of international terrorism, threatens Israel with destruction, denies the Holocaust, oppresses women, executes homosexuals, and punishes religious conversions with death."
The paper concluded: "The moral compass that should guide the words of a president of the German republic has in this case greatly failed." To put the congratulation of the Iranian government in even more perspective: When Donald Trump was elected US president in November 2016, Steinmeier, then FM, explicitly said he would not congratulate him.
Israeli leaders have found many ways to express gushing praise for people who are far from friendly toward Israel. When Shimon Peres, then Israel's president, visited Norway in 2014, he stated nonsensically, "Norway is the pearl of humanity, built on human values, and seeks to keep people equal and free."
A report, published in 2012 by the Norwegian Center for Studies of the Holocaust and Religious Minorities and paid for by the government, found that 38 percent of Norwegians believe Israel acts toward the Palestinians as the Nazis behaved toward the Jews. The tiny Norwegian Jewish community has suffered from substantial antisemitism in the country supposedly "built on human values."
Originally published at Algemeiner.com - reposted with permission.