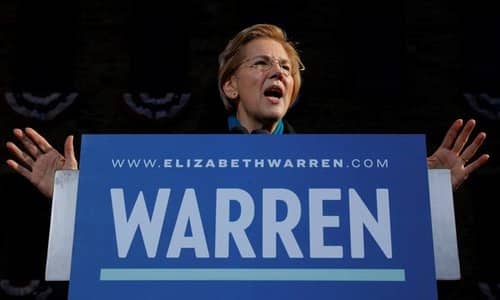 By Melani Phillips/JNS.org October 25, 2019
Share this article:
The Democratic presidential hopeful, Massachusetts Sen. Elizabeth Warren, has suggested that she would consider cutting military aid to Israel to force it to halt construction of settlements in the disputed territories.
"It is the official policy of the United States of America to support a two-state solution, and if Israel is moving in the opposite direction then everything is on the table," she said. To ensure that no one failed to understand her threat, she repeated her final phrase.
Her comment furnished more evidence that Warren resembles British Labour Party leader Jeremy Corbyn in her far-left and Israel-bashing views. This threatens to harm not only the sole democratic U.S. ally in the Middle East, but also the interests and security of America itself.

Nevertheless, opposing Israeli settlements and taking the side of the Palestinian Arabs is unlikely to damage Warren's prospects in broader progressive circles because these are views that they generally share.
This is not merely a divisive policy stance. It also displays a fundamental misconception about the Arab war against Israel that is shared widely within the Jewish as well as non-Jewish world.
At the most obvious level, bashing the settlements is historically and legally wrong.
Israel is entitled to retain and settle these territories twice over. The 1922 Palestine Mandate, whose terms have never been abrogated, gave the Jews alone the right to settle in what is now Israel, the "West Bank" and Gaza. In addition, international law upholds Israel's right to retain land taken, as it was in 1967, in a war of defense against those who still continue to use it as a landing stage for attacks.
Moreover, the belief that the settlements prevent the creation of a Palestine state that would end the Middle East conflict is transparently false and historically illiterate.
The Palestinian Arabs think all Israel is a "settlement" of squatters with no rights to the land, and they want all of Israel gone. They make this plain in their deeds, their propaganda, and their maps and flags.
Proof that the settlements are not the issue is furnished by the simple fact that the attempt to prevent and then exterminate the Jewish homeland started decades before the 1967 Six-Day War introduced the claim of "occupation." And the Palestinian Arabs have repeatedly been offered a state of their own, to which they have responded only by terrorism and war.

Nevertheless, "progressives" insist that Israel has deprived the Palestinian Arabs of a state. They believe that the Palestinians' quarrel is with Israelis. They refuse to believe this is based in turn on a murderous hatred of Jews.
They'll probably therefore blank out from their field of vision what has happened to a 50-year-old Palestinian Arab supermarket worker from Hebron. According to a report on Ynet, this man recently converted to Judaism through an ultra-Orthodox religious court in Bnei Brak.
Before his conversion could be recognized by the Israeli rabbinate, he was arrested by Palestinian Authority forces.
On the eve of Yom Kippur, the man traveled to an area under P.A. control to meet one of his nine children, who along with their mother are all Muslim. During this reunion, he was dragged into a car by four men and dumped at a police station in Hebron. He has remained in custody ever since, and is said to have been beaten and tortured.
The official reason for his arrest is a complaint by the man's brother that several months ago, the supermarket worker had assaulted him. The man denies these allegations, claiming that his brothers had beaten him up and told him he would be disinherited following his conversion to Judaism.
According to his lawyer, who is associated with the Legal Forum for the Land of Israel pro-settler group and who specializes in assisting Palestinians who co-operate with Israel, his brothers are trying to distance themselves from him and his conversion to protect themselves from P.A. reprisals.
So a pro-settler group is assisting a Palestinian Arab who is being ill-treated by other Palestinians simply because he wants to become a Jew, while the likes of Elizabeth Warren condemn the settler movement for thwarting a solution to the Middle East conflict.
What this story shows is that beneath the ostensible conflict over rival forms of statehood lies a religiously based hatred of Jews or Judaism. The Palestinian convert was not involved in any political activity; he merely wanted to become a Jew.
And what self-styled progressives cannot bring themselves to acknowledge is that the Arab war against Israel is founded on a racist war against the Jews.
That's why any Arab who sells his house to an Israeli Jew faces punishment and, in principle at least, a sentence of execution.
The likes of Warren and other so-called "progressives" ignore such inconvenient truths. They also ignore the grotesque anti-Semitism that pours out of the P.A. in its videos, educational materials and cartoon propaganda.

The website Palestinian Media Watch has exposed many examples of this murderous incitement. In 2016, for example, the P.A. revived the medieval blood libel that the Jews were poisoning the wells, claiming that an Israeli rabbi had "issued a ruling" that permitted "settlers" to "poison the drinking water and the natural wells in the [Palestinian] villages and towns throughout the West Bank."
P.A. leader Mahmoud Abbas then repeated this calumny to the European Union, claiming that Israel had poisoned Palestinian water sources in order to "mass murder" Palestinians.
In 2015, a teacher at the Al-Aqsa mosque taught another medieval blood libel that Jews use the blood of non-Jewish children to make Passover matzah.
In July, a post on Fatah's official Facebook page said that Jews "allied with Nazi Germany to burn Jews for profit." In February, another post presented as authentic a claim that during World War II, Jews eagerly agreed to bury Russian civilians alive in order to save their own skins; and that seeing this, a Nazi soldier proclaimed to the Russians: "I just wanted you to know who the Jews are and why we are killing them."
The P.A. regularly presents the Jews as the source of all evil in the world and plotting against all humanity. Abbas has said that the Jews suffered the Holocaust because of their "social roles" connected to "usury and banks."
The Islamic basis of opposing the Jewish homeland in the land of Israel goes back to the rise of Islamic extremism during the Palestine Mandate, which was based on a theological hatred of Jews.
Today, the P.A. regularly describes the peaceful visits by Jews to Temple Mount as "violent invasions by extremist Jewish settlers into the Al-Aqsa mosque," and uses this incitement as a pretext for violence.
And, of course, by "settlers" they don't mean Israelis living in the disputed territories. They mean Jews.
Yet this obscene agenda of incendiary Jew-hatred has become the signature cause of "progressives," who tell themselves, in their moral imbecility, that targeting Israeli settlements proves their own virtue by supporting a righteous cause.
This has not just contributed to the explosion of eye-watering Jew-baiting and Israel-bashing on the left. It has also helped destroy the West's entire moral compass, and the part it has played as a result in our current civilizational turmoil is therefore immeasurable.
Originally published at JNS.org - reposted with permission.