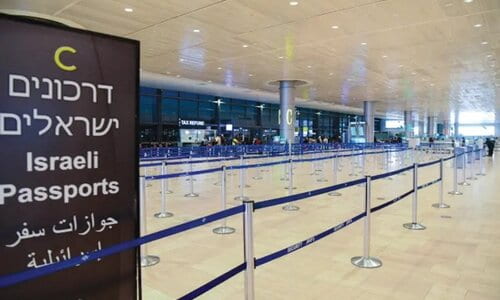 By Algemeiner.com March 12, 2020
Share this article:
The rapid global spread of coronavirus (Covid-19) poses a threat to the Israeli economy as a whole, but the harshest and most immediately hit sector is, undoubtedly, tourism. One just has to look at the number of people crossing into Israel.
In March 2019, some 60,000 people on average passed through Ben Gurion Airport each day. This year on March 1, 52,000 travelers passed through the airport. On March 2, their number dropped to 46,000. Earlier this week, the daily number fell under 22,000, and it is expected to keep falling.
The empty airport conveyor belts are on everyone's mind. Airlines, hotels and hostels, tour companies, and vehicle leasing companies are all feeling the impact of coronavirus. Some have already responded with layoffs and unpaid leave. The Israel Airports Authority regularly employs 4,000 permanent workers and 2,000 temporary workers, and has already put 1,400 temporary employees on unpaid leave.

Israel's national carrier El Al Israel Airlines has forecasted revenue losses of $160 million between January and April, and announced it will let 800 permanent and 200 temporary employees go, with most others expected to go on unpaid leave. Israir Airlines, which employs 470 people, is expected to let go 5% of its employees and might still put others on unpaid leave. Arkia Israeli Airlines put 100 of its 550 employees on vacation.
Israeli travel agencies are also feeling the strain. The country has around 400 agencies and 4,000 tour organizations, which to date recorded a $850 million drop in revenues, taking into account summer cancellations. Of the 7,000 employed in the sector, 30% have already been put on unpaid leave, and 23% have been let go or are in the process of being let go. Over 20% have taken a pay cut or saw their work hours reduced.
The hotel industry, which saw an NIS 12 billion (approximately $3.38 billion) turnover in 2019, has estimated the annual damage at NIS 5 billion (approximately $1.41 billion). Of the 41,000 people employed in the sector, 10,000 have been put on unpaid leave, and another 10,000 are under threat of being let go. The car rental sector has also come under heat, as companies are freezing orders previously booked in preparation for Passover tourism.
The ruling sentiment in the industry is that the government is not taking into account the immediate impact, or the damage people will have to contend with once the crisis ends. "Of all the sectors of the economy, tourism has been most affected by corona," Amir Hayek, the president of the Israel Hotel Association, told Calcalist. "If you consider the hotel industry, the airlines, and the tour agencies, the damages this year will reach NIS 10 billion to NIS 12 billion." That is between $2.82 billion and $3.38 billion.

Israir CEO Uri Sirkis told Calcalist the airline has already canceled hundred of flights. "In March alone we canceled some 200 flights, which are 70% of all our March flights. Out of all Israir's destinations we still fly to only five: Sochi, Baku, Batumi, Tbilisi, and Larnaca. We canceled all other destinations."
There is a daily press conference regarding quarantine policies, but no one is talking about the losses, according to Ronen Carasso, CEO of tourism company Issta Lines. "We are shattered at Issta. We're talking an 80%-90% drop in orders. Passover is empty. They are talking about closing hotels in Israel, airlines will drop to 20% of the usual activity."
Yossi Fatael, general manager of the Israel Incoming Tour Operators Association, says some of the major long-term damage will come from the way tourists have been treated since the crisis began. "The way Israel has treated foreign citizens will not be fast forgotten," he told Calcalist.
"The decision was to put tourists into quarantine, and it is a decision that cannot in actuality be carried out. Hotel employees that saw a group from a barred country arriving just ran off, and tourists became refugees. We had buses full of tourists that just drove around all night looking for a place to sleep." The state did not help tourists leave either, Fatael said, adding that most tourists had to find flights themselves.
As far as the association is concerned, policies and orders that cannot be enforced are a deception, Fatael said. "Only lately did Israel come to its senses. They issued an instruction that tourists in Israel can finish their visits and then leave. That means that if an Israeli citizen lands from France they need to go into quarantine, but a French tourist arriving can finish the tour."
The humiliating attitude towards tourists still continues, however, he said. "Yesterday, they announced that anyone who has been in the Bethlehem area must be secluded. We currently have hundreds of buses with tourists going around the country, with exposed drivers and guides. What are we supposed to do, abandon the tourists?"
Israel's airlines have already taken immediate action to try and reduce damage. After El Al announced its layoffs, employees announced they were prepared to waive 15% of their salaries in an effort to reduce layoffs, and pilots announced they were ready to waive 20%. El Al also announced it will cut 20% of the wages of its high-earners, management, and board members.
Israir announced it would end all international flights as of next week, after making sure all its Israeli passengers returned to Israel. Sirkis, who estimates there are around 5,000 customers who need flights back, said that Israir has an orderly plan: one that takes into account job cuts and reduced acquisitions as well as special offers for the future intended to assure operations after the crisis has passed.

The hotel chains have found their own way to handle the drop in bookings. Isrotel Hotels Management decided to close its Leon Tower hotel in Tel Aviv and relocate all the guests to its nearby Royal Beach hotel. CEO Lior Raviv told Calcalist that in a tourist-based city like Tel Aviv, occupancy dropped by 10%-15%, and it could get even worse after the last tourists leave.
"We are reorganizing. That is our advantage, as a chain with several hotels. We will use the shut down for renovations. Hotels are fortunate that weekend occupancy in Eilat is still at 80%-90%, because once it gets warmer Israelis travel there." Isrotel is doing all it can so that Jordanian employees can still come to Eilat, banking on current occupancy to persist, Raviv said, "but it is a difficult period."
Industry leaders are still rife with uncertainty when it comes to the future. According to Sirkis, people are not worried about flying but about quarantine. "No one wants to sit at home for two weeks for a two-day vacation." Just like El Al, Israir is also negotiating with the Ministry of Finance to make sure the Israeli airline industry survives the current paralysis, and that foreign airlines will not be the ones to benefit when air traffic resumes, he said.
Fatael believes that the health ministry needs to make professional decisions, and then stand aside and let the market and the Ministry of Tourism handle the rest. "When the state says to isolate tourists, it needs to have a plane at the airport that can take them. Israel could have leased a hotel and hosted tourists with respect; that didn't happen. Unlike other industry sectors, it takes us half a year to regain order. Even if the crisis ends tomorrow, it will take us half a year."
According to Hayek, the Israel Hotel Association is not going against government decrees, but with the way things are, the state should offer immediate compensation and not wait for the end of the crisis, he said. "There are chains and there are solitary hotels. Chains can cut their losses, move guests from one hotel to another. What is a solitary hotelier to do? He will take a big hit. We want the government to shoulder part of the loss, we want money infused to hotels so that they can meet their commitments, we want to maintain our employees."
A responsible government would have immediately provided assistance to conserve the industry, Hayek said. "By the time corona passes, there will be no industry. We're meeting with government officials, we pass on our messages. The tourism minister is in contact with us but the problem is not with the tourism ministry but with the prime minister's office and the finance ministry. The prime minister's office is not providing the finance ministry with guidance, and the ministry comes up with solutions like loan funds, which is like putting a plaster on corona."
Tourism agencies have a similar criticism. "The way the corona crisis has been managed is an outrage," Carasso said. "We had to put 50% of our 550 employees on unpaid leave, we had layoffs, and we are just at the beginning of the crisis." According to him, the government is driving companies into bankruptcy. "People will stay healthy, but without any money for food."
Originally published at Algemeiner.com - reposted with permission.