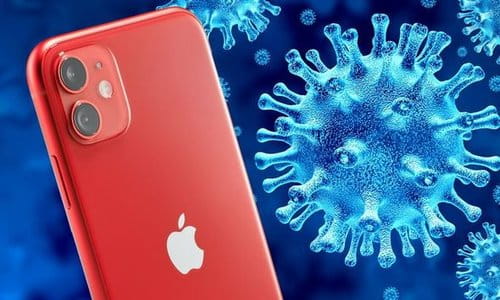 By Aaron Kesel/Activist Post March 27, 2020
Share this article:
The coronavirus outbreak is proving to be the Trojan horse that justifies increased digital surveillance via our smartphones.
All over the world, starting with China - the suspected origin of the COVID-19 outbreak - governments are increasing surveillance of citizens using their smartphones. The trend is taking off like wildfire; in China citizens now require a smartphone application's permission to travel around the country and internationally.
The application is AliPay by Ant Financial, the finance affiliate controlled by Alibaba Group Holding Ltd. co-founder Jack Ma, and Tencent Holdings Ltd.'s WeChat. Citizens now require a green health code to travel.

If you have been placed under quarantine the goverment will install CCTV cameras to point at your apartment door to make sure you don't leave.
China isn't the only country looking towards smartphones to monitor their citizens; Israel and Poland have also implemented their own spying to monitor those suspected or confirmed to be infected with the COVID-19 virus.
Israel has gone the more extreme route, and has now given itself authority to surveil any citizen without a court warrant. Israel's security agency Shin Bet is using citizens' cell phone location data to track where they've been so they can enforce quarantine controls and monitor the movements of those infected. Controversially, the data has been collected over the past few years and was intended for counterterrorism purposes.
Poland on the other hand is requiring those diagnosed with COVID-19 ordered to self-isolate to send authorities a selfie using an app. Which, if Poles don't respond back in 20 minutes with a smiling face, they risk a visit from police, Dailymail reported.
Singapore has asked citizens to download an app which uses Bluetooth to track whether they've been near anyone diagnosed with the virus; and Taiwan, although not using a smartphone, has introduced "electronic fences" which alert police if suspected patients leave their homes.

In South Korea, the government used records such as credit card transactions, smartphone location data and CCTV video, to create a system where confirmed cases were tracked. The result was a map that could tell people whether they had gone near a coronavirus carrier.
Meanwhile, here in the U.S. as reported by the Washington Post, smartphones are being used by a variety of companies to "anonymously" collect user data and track if social distancing orders are being adhered to.
Beyond that, the mobile phone industry is discussing how to monitor the spread of COVID-19. If that's not enough, the government wants to work with big social tech giants like Google, Facebook, and others, to track the spread of COVID-19.
A new live index shows the increase of the police state by Top10VPN, a Digital Rights group. Top10VPN lists a total of 15 countries which have already started measures to track the phones of coronavirus patients, ranging from anonymized aggregated data to monitor the movement of people more generally, to the tracking of individual suspected patients and their contacts, known as "contact tracing."
Samuel Woodhams, Top10VPN's Digital Rights Lead who compiled the index, warned that the world could slide into permanently increased surveillance.
"Without adequate tracking, there is a danger that these new, often highly invasive, measures will become the norm around the world," he told Business Insider. "Although some may appear entirely legitimate, many pose a risk to citizens' right to privacy and freedom of expression.
"Given how quickly things are changing, documenting the new measures is the first step to challenging potential overreach, providing scrutiny and holding corporations and governments to account."

That's not the only live index, a company called Unacast that collects and analyzes phone GPS location data also launched one. Except this is a "Social Distancing Scoreboard" that grades, county by county, monitoring who is following social distancing rules.
As Activist Post previously wrote while discussing the increase of a police surveillance state, these measures being put into place now will likely remain long after the pandemic has stopped and the virus has run its course. That's the everlasting effect that COVID-19 will have on our society.  The coronavirus is now classified as a pandemic by the World Health Organization, and it may very well be a legitimate health concern for all of us around the world. But it's the government's response that should worry us all more in the long run.
Albert Fox Cahn, executive director of the Surveillance Technology Oversight Project, a nonprofit advocacy group, raised this concern in an interview with CNBC and pointed to the USA Patriot Act which was signed into law after the 9/11 terrorist attacks.
The legislation gives federal government broad surveillance powers to aid their counterterrorism efforts. But the law, which was initially due to expire in 2005, was renewed and earlier this month, got another short-term renewal until later this year.
"We have absolutely no reason to believe that the government agencies that are eager to expand their power in response to COVID-19 will be willing to see those authorities lapse once the virus is eradicated," Cahn told CNBC.
Originally published at Activist Post - reposted with permission.