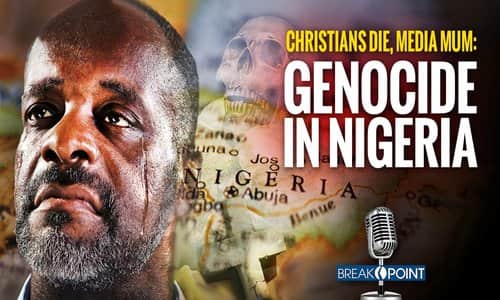 By Giulio Meotti/Gatestone Institute September 09, 2020
Share this article:
"Stop the killings", "Enough is enough", "Our lives matter", said Nigerian Christians and church leaders gathered in London on August 20 to demonstrate against the massacre of Christians in their country. They sent British Prime Minister Boris Johnson a letter accusing the international media of "a conspiracy of silence".
At the same time, a report by three organizations -- the International Organization for Peace Building and Social Justice, the International Committee on Nigeria and the All-Party Parliamentary Group for International Freedom of Religion or Belief -- disclosed that in Nigeria, over the past 20 years, 100,000 Christians have been killed.
Boko Haram, Al Qaeda, Fulani herdsmen and other Islamist groups are responsible for the deaths of more than 96,000 Christians in 21,000 separate attacks. According to the report, 43,242 Christians were killed by Boko Haram, Islamic State and Al Qaeda; 18,834 died in Fulani attacks and 34,233 from other armed groups. Nigeria is becoming the "biggest killing ground of Christians in the world".

"This thing is systematic," said Anglican Archbishop Benjamin Argak Kwashi of Jos; "it is planned; it is calculated.... their intention is to Islamize Nigeria".
The stakes are strategic and immense. Nigeria, already the most populous African country, could have a population of about 800 million people in the year 2100, according to a study by The Lancet, and could become the ninth-largest economy in the world. "If Islam overruns Nigeria, the rest of Africa might easily fall prey to them", Bishop Hyacinth Egbebo said.
To read the reports on the massacres of Nigerian Christians, the scene is always the same: a village with a few poor houses surrounded by open fields. Jihadists appear in the middle of the night and attack house after house.
They break down doors, shout "Allahu akbar", murder the elderly, rape and maim women and children, and kidnap for ransom as a "business." They burn houses, schools and churches. "It is as if the lives of Christians no longer matter", said Pastor Stephen Baba Panya, president of the Evangelical Church Winning All.
"In Nigeria's northern and central belt states, thousands of civilians have been killed in attacks led by Boko Haram, Islamist Fulani herders and other extremist militias", wrote the Baroness Caroline Cox. "Hundreds of churches have been burned to rubble. Entire communities have been forced to abandon their homes and farmland". The International Society for Civil Liberties and Rule of Law warned of the risk of "Rwandan-style genocide".

Organizations that track the persecution of Christians have long been denouncing what is taking place. In 2012, Open Doors USA was already pointing out the risk of genocide in Nigeria. Eight years after that, how many Christian lives have been lost?
How many could be saved if the media, the chancelleries and international organizations had put pressure on the Nigerian leadership to protect its Christians? Why has the West never linked trade, diplomatic, military and political exchanges with Nigeria to protecting its Christians?
US President Ronald Reagan linked talks with the Soviet Union to a campaign to let Russia's Jews leave the country. But even the Jews in the Soviet Union were not experiencing the atrocities that the Christians in Nigeria are suffering every day.
US President Donald Trump, in 2018, raised the issue with Nigerian President Muhammadu Buhari. "We have had very serious problems with Christians who are being murdered in Nigeria", Trump told him. President Trump, however, is almost alone among Western leaders to raise the issue. When his predecessor, President Barack Obama, met with Buhari, he never talked about the murders of Christians.
President Trump should "appoint a special envoy for Nigeria and the Lake Chad region to 'focus like a laser beam' on the attacks by Boko Haram and other Islamic militants... to stop a genocide of Christians in the region," urged former Congressman Frank Wolf.
Six years ago, the kidnapping of 276 female students, mostly Christian, by the Islamist group Boko Haram in Chibok, Nigeria, led to international condemnation. #BringBackOurGirls trended on Twitter -- not surprisingly with no effect on Buhari. The hashtag campaign was brief.
Only one of those kidnapped Nigerian teens, Leah Sharibu, failed to regain her freedom and therefore spent two years in Boko Haram captivity. Why? Because she had refused to renounce Christianity and convert to Islam. Her mother joined a protest in London, but no major European newspaper had time for her. "Out of fatigue or self-shame, or both, we close our eyes", said the journalist Franz-Olivier Giesbert.

"Does the life of Christians in the East, Africa or Asia count? This is a question that we are entitled to ask ourselves when we see the place that our dear media give to the killings and discrimination of which Catholics or Protestants are the object on the planet: nothing or almost nothing , a few fortunate exceptions (...) It is our tartuferie (hypocrisy) that feeds the clash of civilizations".
Another exception was the French author Bernard-Henri Lévy. In a long article, Lévy described his visit to Nigerian churches and villages burned and destroyed by Islamic fundamentalists, while local priests and bishops showed him the photographs of Christian women mutilated after they refused to convert to Islam. Then a Fulani told him:
"This is our land, there are too many Christians here, Christians are dogs and children of bitches. They are traitors because they have converted to the White religion. When they all leave, Nigeria will finally be free".
American journalist Kirsten Powers wrote:
"Christians in the Middle East and Africa are being slaughtered, tortured, raped, kidnapped, beheaded, and forced to flee the birthplace of Christianity. One would think this horror might be consuming the pulpits and pews of American churches. Not so. The silence has been nearly deafening."
Mainline US churches have embraced "virtue signaling" about racism after the death of George Floyd, but no Christian leaders have said "Black Christian Lives Matter" to raise awareness about the massacre of Christians. As one bishop said, Western silence on the persecution of Christians has been "sinister".
The "cultural genocide" of Uyghurs by the Chinese regime has been denounced and is squarely on the radar of our media, and the "Rohingya genocide" in Myanmar ended up in the International Court of Justice in The Hague; German and European Union MPs condemned it. However, on the genocide of 100,000 Christians in Africa's largest country, the West has simply shrugged.
Originally published at Gatestone Institute - reposted with permission.