How The Ancient Maccabees Speak To Us Today 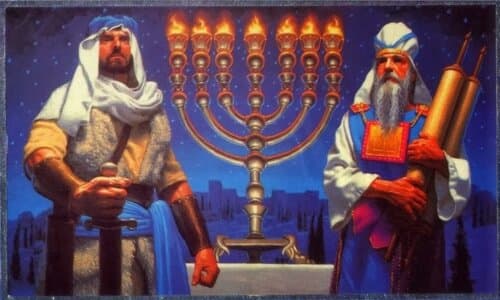 By Michael Brown/AskDrBrown.org Dec 22, 2020
Share this article:
The Feast of Dedication, better known as Hanukkah, was just celebrated by Jews around the world, commemorating events that took place more than 2,100 years ago. But the lessons of Hanukkah are quite relevant to our times today.
According to the Jewish History website, "In the wake of Alexander's appearance in and departure from Jerusalem [in the 330's BCE], relations between Jews and Greeks were so good that an exchange of cultures took place. Each influenced the other.
For the Jewish minority, however, what began as a small undertow of assimilation -- such as giving children Greek names and speaking the Greek language -- became a surprisingly powerful, high-speed rip current threatening to drag the caught-off-guard Jews out to the sea of complete assimilation."

A similar pattern has repeated itself throughout history. The world around us, the believers, is so beautiful and sparkly. It is so appealing, so wise, so ascendant. Why can't we be just like the world? Why must we be so different?
So, in small, subtle ways, we begin to take on the spirit of the age, in our educational system, in our entertainment, in the ways we dress and live and speak.
Soon enough, we have lost the fear of God, our morals have been compromised, and our kids have no connection to the values of past generations.
Sound familiar?
The website continues, "Jews who embraced Greek culture at the expense of Judaism became known as Misyavnim, or Hellenists. Estimates are that a third or more of the Jewish population was Hellenist, including those who reversed their circumcision, ate pork, bowed to idols and even became self-hating enough to side with the enemies of Israel. Hellenism threatened to annihilate the Jewish world through assimilation in ways tyrants tried but could not do by force."
Had the Jewish people been ordered to apostasize, had they been commanded by ruthless tyrants to forsake the faith of their fathers, they likely would have resisted. Instead, they were seduced by the "enlightened" culture, by the lust of the flesh, the lust of the eyes, and the pride of life (see 1 John 2:15-17).
As for Jewish men who had reverse circumcision operations (literally), they did this to fit in with the crowd. After all, with major athletic competitions conducted in the nude, to be circumcised was to be an outsider. At all costs, they had to fit.

Indeed, "Had the situation continued as it was, the Greeks would perhaps have won the battle by default. However, they overstepped themselves."
The same thing is happening in our day. The left is going too far.
Beginning in the 190s BCE, when factions in Alexander's kingdom were at war with another, the Jewish people were caught in the middle. Now their outlook began to change. That's because, "Whenever a foreign army comes into a country it changes the view of the populace. Instead of an attractive culture, the Greeks were now an occupying enemy. Instead of something to be imitated, now they became something to be resisted."
But "the Jewish people are very stubborn. The same person who is so stubborn that he will not observe the Torah in freedom will observe it with passion if forbidden from observing it. He becomes stubborn the other way.
"A good case could be made that if the Communists in Russia would have left the Jews alone they would have completely assimilated. However, once told that they could not be Jewish a certain percentage of Jews decided to be Jewish at great risk. That happened with the Greeks as well."
This is what is happening in America today as the left becomes more and more authoritarian. You conform, or else. You fall into line, or else. The cancel culture is here. Mob rule is here. Our very freedoms are under attack.
Suddenly, more and more Americans are waking up and more and more believers are standing up.
Once again, our ideological opponents have overplayed their hand, and we are becoming "stubborn the other way."
In the ancient Jewish world, "The Greek army exerted a very heavy hand against the Jews. First, they forced Jews to finance their war through collection of taxes. Then they forced them to quarter their soldiers in Jewish homes. Finally, the Greeks were determined to crush the Jewish religion.
"First, they took the statue of Zeus and mounted it in the courtyard of the Temple. Next, the Greeks banned the observance of the Sabbath on the pain of death. Then, the Talmud (Kesubos 3b) records, there was a period of time which lasted a number of decades when the Greek officer in town had the right to 'live' with a woman on her wedding night before her husband-to-be.

"The Greeks also banned circumcision. Whoever circumcised his child was put to death; both child and father were killed. Then the Greeks demanded that altars to the Greek idols be established and that sacrifices be offered on a regular basis in every Jewish town. Finally, the Jewish educational system was entirely interrupted."
This, of course, begs the question. How much is too much? At what point do people say, "I would rather die fighting for freedom than live in humiliation and slavery?" This was the turning point for the Jewish people in the second century BCE.
You can read the rest of the story on the Jewish History site. Suffice it to say here that there was one particular straw that broke the camel's back. Then the uprising began.
Many of the courageous freedom fighters lost their lives in the process, but their nation was liberated, and their Temple, which had been grossly defiled by the Antiochus Epiphanes, was rededicated.
It is the rededication of the Temple that we celebrate during Hanukkah, lighting candles to remember each of the 8 nights that one cruse of oil continued to burn in the Temple lampstand, an obvious miracle from God. He himself had been the force that moved His people to liberty.
Believers today in America face a similar situation, albeit one that is not nearly as severe as that faced by the ancient Jews. We remain free people in our own land, and we are not yet under foreign occupation. (Even if foreign governments are having undue influence in our country, it cannot be compared to the situation faced by the Jews under the Greeks.)
The pressure to assimilate and conform is everywhere.
The desire to fit in and be accepted by the world ("woke"!) is intense.
The cost of fighting back becomes more acute by the hour.
And our most essential freedoms are under genuine attack.
Now is the time for us to rise up with holy stubbornness, not by taking a sword to our political and cultural opponents but by taking a stand.
Now is the time to push back against every attempt to dominate our lives, again, not with violent uprisings but by counterculture living, putting into practice the timeless practices of Scripture.
Now is the time to break the fear of man and renounce the grip of this age, determining to lose our lives that we can save our lives (in the words of Jesus).
This means parents standing up in their school systems and young people standing up on social media.
This means employees pushing back in the workplace and influencers using their influence for good, realizing that if we don't use our rights we will soon lose them. This means making our money talk.
We don't need to yell and scream. We don't need to resort to vulgarity and profanity. We don't need to raise our fists and threaten.
We simply need to do the right thing, regardless of cost or consequence.
Let future generations read about the courage of our generation, a generation that refused to compromise or bow the knee. It's time to take our stand.
Originally published at AskDrBrown.org - reposted with permission