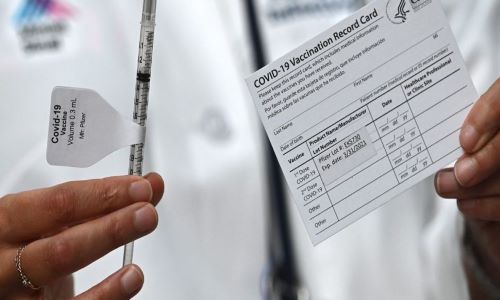 By PNW Staff January 11, 2021
Share this article:
The Russian government is set to roll out electronic vaccination certificates that will provide proof an individual has received a COVID-19 jab for the purpose of traveling across borders.
RT reports that a series of instructions were published prior to the new year in which Russian President Vladimir Putin ordered policymakers "to consider issuing certificates to people who have been vaccinated against Covid-19 infections using Russian vaccines... for the purpose of enabling citizens to travel across the borders of the Russian Federation and those of other countries."
Russian Health Minister Mikhail Murashko said over the weekend that as of January 1, people who are inoculated in Russia will be issued the electronic certificate. He also mentioned that the ministry will keep a database of citizens who have been vaccinated, similar to the decision made by Spain's government in December.

It is unclear if Russia will also keep a database of people who have been offered the vaccine and refused it as Spain is doing.
The idea of issuing an "immunity passport" is being considered, and even in some cases implemented, by numerous major airlines.
In November, a spokesperson for Korean Air said there's a "real possibility" airlines will mandate passengers take a COVID-19 vaccine before being allowed to travel.
Lance Gokongwei, President and CEO of the largest budget airline in the Philippines, said in December that 'COVID passports' were "essential" for travelers to fly.
Right before the new year, Singapore Airlines became the first to officially launch a COVID passport, which will display the vaccination status and COVID test results of passengers.
The International Air Transport Association (IATA) has previously said it's "in the final development phase" of a mobile "digital passport" app that would tell airlines if international travelers had been vaccinated against COVID-19. The app would help "get people traveling again safely," IATA's Nick Careen said in a statement, by "giving governments confidence that systematic COVID-19 testing can work as a replacement for quarantine requirements."

Needless to say, the International Air Transport Association will be strongly urging all carriers to use this new "digital passport" in the months ahead.
But will the airlines go along?
In Australia, Qantas Chief Executive Alan Joyce has already made it quite clear that he expects international travelers to prove that they have been vaccinated...
"We are looking at changing our terms and conditions to say for international travelers, that we will ask people to have the vaccination before they get on the aircraft," Joyce told Australia's Network Nine television.
Here in the United States, the major airlines are not committing one way or the other just yet...

When asked if American Airlines would implement such a policy, a company spokesperson said that while the airline is pleased that vaccine innoculation is moving forward, it's too early to comment on policies related to a COVID-19 vaccine. A spokesperson from Delta couldn't share specifics either, and noted that the entire pandemic has been unpredictable.
A spokesperson for Southwest said that the airline "will continue monitoring public health information from the CDC, the latest scientific research, and insights from our internal and external experts to guide our operational policies as we work to support the well-being of our customers and employees during the COVID-19 pandemic." Jet Blue and United did not respond to a request for comment.
But if the federal government ultimately decides to order the airlines to go along with this new program, you know that they will fall in line.