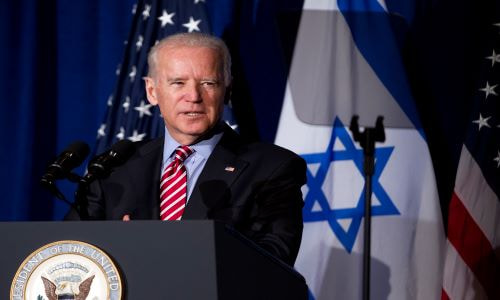 By Peter Schweizer/Gatestone Institute February 23, 2021
Share this article:
U.S. policy towards Israel stays fairly consistent despite changing administrations. Even after President Barack Obama's "apology tour" to the Arab world early in the first term of his presidency -- and his last-minute attempt to carve out a de facto Palestinian state through UN Security Council Res. 2334 -- official U.S. policy towards Israel did not significantly change.
That held true despite Obama's efforts and the palpable personal dislike between himself and Israeli leader Benjamin Netanyahu.
U.S. policy towards Israel's neighbors is what has defined the character of each administration's relationship with the Jewish State. The Obama administration was keen to improve America's standing among the Muslim nations of the Middle East.

His administration negotiated a nuclear deal (JCPOA) with the Iranian mullahs that was bad for the U.S. (which found it had only legitimized the regime that the U.S. Department of State called the "world's worst state sponsor of terrorism"), and bad for Israel (the deal would allow Iran, after a few years, to become a full-blown nuclear power). That deal was one of many reasons for the success of President Donald J. Trump's campaign in 2016.
So, what does the new administration of President Joe Biden, Obama's vice president, mean for Israel's future? For starters, a second life for that bad Iran deal. The Biden administration has already promised to return the U.S. to the JCPOA, provided that Iran will once again agree to honor its terms.
The Iranians, based on a well-established track record, most likely will not honor those terms. That will certainly create friction not only with Israel, which has everything to fear from a nuclear-armed sworn enemy so close to home, but also with many of Iran's Sunni neighbors, who are also alarmed by the prospect of a nuclear-armed, Shi'ite, aspiring hegemon in the region.
Israeli newspapers are now reporting on the Israel Defense Forces' preparing plans for a possible military option to "undermine Iran's nuclear efforts or, if need be, counter Iranian aggression, which will soon be presented to the government." Just three weeks after Biden's election, Iran's top nuclear scientist, Mohsen Fakhrizadeh, was killed on the outskirts of Tehran by what the Iranians said was a satellite-controlled machine gun.

Iranian authorities publicly blamed Israel for the assassination. Israel clearly sees a threat from Iran's pursuit of enriched uranium beyond the levels needed for civilian uses. Not only Israel but a goodly number of Arab and Muslim states in the region also do not want that deal back.
Not just Israel's safety, but stability throughout the entire Middle East, hangs in the balance. How Biden and his incoming diplomatic team handle this early test will say much about their priorities and focus. On its first full day in office, the administration had to walk back an "inadvertent" change someone made to the Twitter account bio for the U.S. Ambassador to Israel, which briefly read, "Israel, the West Bank and Gaza" before being changed back.
Biden and his Secretary of State, Antony Blinken, clearly will not want to be distracted from the rest of their agenda by a war between Israel and Iran, or anyone else.
Along with the Iranian menace, Israel, as always, faces its Palestinian problem. The last few years, however, have shown that Arab counties seem tired of a Palestinian intransigence that has only held everyone back.
Blinken has previously criticized the Palestinian leadership: he notably paraphrased former Israeli Foreign Minister Abba Eban's quip that they "never miss an opportunity to miss an opportunity" in seeking a peaceful solution with Israel. Many observers expect Biden's official policy towards the Palestinians to look much like Obama's or Bill Clinton's.

Neither Clinton nor Obama was successful in any sustained way, but for Democrats weary of anything connected with Trump, a drawn-out lack of progress might actually seem more appealing than continuing to build a successful coalition in the region.
More than his Democratic predecessors, President Biden faces pro-Palestinian, anti-Israel forces within his own party. Sooner or later, the hardcore "squad" in the House that includes Reps. Rashida Tlaib, Alexandria Ocasio-Cortez, Ayanna Presley and Ilhan Omar, plus a few new players, will doubtless try to pressure Biden to appease their radical wing. Succumbing to that pressure would likely bog down and contaminate not only his new administration but also the new peace now blossoming in the Middle East.
Many domestic problems await Biden's attention, from the economic seizures wrought by the COVID-19 pandemic to racial tensions from extremists of both the Left and the Right. For Democrats, environmental issues such as climate change remain on their mind.
Looming large internationally is America's most predatory adversary: China. Biden would do well to be resolute and tough with Beijing, if only to distract public attention from the revelations about his son Hunter's involvement with Chinese government-tied businesses.
Biden himself still faces potentially bad news from the results of an FBI investigation into his son's business dealings. The threat of still more damaging revelations relating to his son would be yet another reason for Biden to want to put Israel policy in a holding pattern while he attends to more pressing matters.
Originally published at Gatestone Institute - reposted with permission.