California Bill Would Fine Stores $1,000 For Having Boys' And Girls' Toy Section 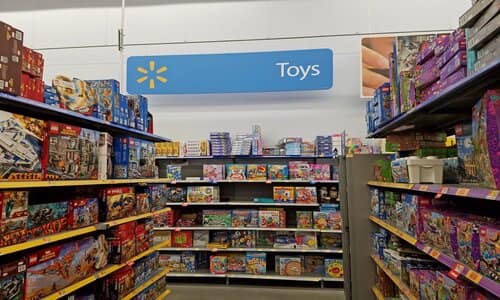 By Jonathon Van Maren/Bridgehead.ca March 03, 2021
Share this article:
In February of last year, The Babylon Bee published a satire story titled, "California Bill Prohibits Stores From Selling Toys That Don't Actively Confuse Children's Sexuality." The Bee noted: "The law will ensure no more anti-science 'boy aisles' or 'girl aisles' like the ones used in deplorable states. Now shoppers can search the entire store before finding the gender nonconforming toy that is right for them."
As The Bee's managing editor Joel Berry stated on Twitter: "WELP... another @TheBabylonBee prophecy fulfilled."
You read that right. The California State Assembly will be considering a new bill that forces department stories to rearrange their toy sections to ensure that they are "gender-neutral." The bill was put forward last year by Democrat Evan Lowe, who says he got the idea from a female staffer offended by the fact that her daughter had to get a toy she wanted from the boys' section.

This inconvenience, in California, must be addressed by laws inconveniencing stores. He is now putting it forward again. The need, after all, is still a pressing one.
It may come as a surprise to many of you that boys and girls sections in stores have become a flashpoint among a subset of weird ideologues with nothing better to do. According to Politico:
The bill comes amid a growing backlash to gender-specific toys and clothing. Groups such as the international Let Toys Be Toys campaign argue that such merchandise perpetuates entrenched gender stereotypes and can make children feel shame if they don't conform to them. Target in 2015 announced it would stop its gender-based labeling of toys under pressure from consumer advocates.
By "growing backlash" and "consumer advocates," Politico is referring to a tiny group of activists obsessed with forcing their fantasy of a non-binary world on the public by means of progressive legislators who both enjoy social engineering and don't dare refuse the demands of eunuchs and drag queens.

This bill, apparently, is necessary to fight "judgment" and "prejudice." Progressives are great at taking actual words and neutering them of all meaning. Which, considering their trans ideology, isn't much of a surprise.
Or as Evan Lowe, who is briefly stealing the title of most delusional California legislator from Scott Wiener, put it: "This is an issue of children being able to express themselves without bias ... the policy behind this bill is not only important in regards to addressing perceived societal norms but also ensuring that prejudice and judgment does not play a prominent role in our children's lives."
Californian mothers and fathers can go weak-kneed with relief that department stores will no longer be able to inflict segregated toy aisles on their bewildered children -- at least, not if Evan Lowe has anything to say about it. Not all heroes wear capes -- especially not gender-neutral ones.
According to Politico: "Large retailers that sell toys, clothes, and other children's items in California would have to devote floor space to merchandise marketed to both boys and girls under a new bill.
Stores would be able to sell the same products they do now as long as they maintain some areas where shoppers can find all toys or clothes, regardless of gender-based marketing, under CA AB2826 (19R) from Assemblyman Evan Low (D-Campbell). It would apply to department stores with 500 or more employees beginning in 2023." (Ahem ... Assemblyperson, surely.)

The bill itself reads like something written by the Human Rights Campaign: "Keeping similar items that are traditionally marketed either for girls or for boys separated makes it more difficult for the consumer to compare the products and incorrectly implies that their use by one gender is inappropriate."
As The Daily Wire noted, California retailers are having a hard enough time staying afloat due to being weighed down by COVID restrictions and shut-downs. That, however, does not concern a man of Evan Lowe's lofty views.
His proposed bill would fine department stores up to $1,000 for having girls and boys sections for toys. This penalty, he clearly believes, is proportionate to the crime. Californians are lucky to have such a luminary. During a time of crisis, it's good to know the adults are in charge.
Originally published at The Bridgehead - reposted with permission.