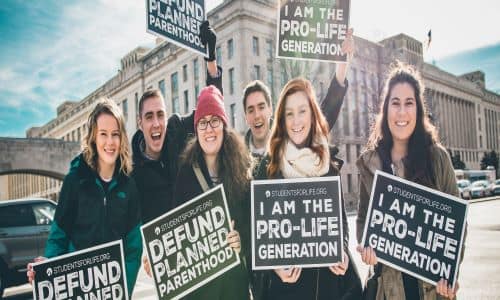 By Tony Perkins/Family Research Council March 25, 2021
Share this article:
If you sent your teenagers off to Christian colleges thinking they'd be safe from Planned Parenthood's tentacles, Students for Life says: think again!
In a stunning new report, Kristan Hawkins's group is digging into 700 faith-based schools, and what they've found so far will surprise you. At least 25 religious colleges and universities have relationships with the abortion giant. And that, she believes, is just the beginning.
"There is an unholy partnership between a number of Christian schools and the abortion industry," Kristan warned in the first of three planned reports. Catholic, Lutheran, Methodist, Presbyterian -- you name it -- they aren't immune to Big Abortion on campus.

One whistleblower in a small town of 30,000 says her office saw one to two new biologically female teen patients looking for hormone treatments every day.
Just like abortion and radical sex ed and everything else Planned Parenthood offers, "you can walk into a clinic...without so much as a therapist's note," Abigail Shrier warns, "and get a course of testosterone that day." (The same testosterone, incidentally, that can cause "deepened voice, enlarged clitoris, increase in red blood cell count, and greater risk of heart attack, infertility, vaginal and uterine atrophy, endometrial cancer -- as well as all the unknown risks" that come with a dangerous and radical puberty intervention.)
Join the movement to kick the radical transgender-abortion giant off Christian campuses. Sign the petition to college presidents here.
Originally published at Family Research Council - reposted with permission.