10 Takeaways From The Latest Conflict Between Israel And Hamas 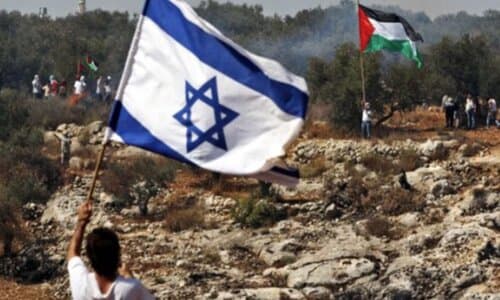 By Alex Traiman/JNS.org May 26, 2021
Share this article:
Over this past weekend, Arabs were shooting fireworks in the sky, supposedly in celebration of holding Israeli population centers hostage for 11 days with more than 4,000 rockets. Fireworks shooting upwards represented a dramatic improvement over the previous week, during which the celebratory projectiles were being shot horizontally at police within Israeli cities, and Hamas rockets and Israel missile defenses lit the night skies.
If sending Israelis in and out of bomb shelters for nearly two weeks is a victory for Palestinian factions, so be it. Israelis came out virtually unscathed.
1. Israel's military is among the world's best
The star of the latest conflict was Israel's Iron Dome. While Hamas placed their military fortunes in unsophisticated rockets fired indiscriminately towards Israeli population centers, Israeli missile defense demonstrated just how deep the gap is between fighting units. Israel's Iron Dome system shot down nearly 90 percent of the rockets identified in real time as flying toward Jewish civilians.
Meanwhile, Israel pounded Hamas infrastructure day after day, striking at 1,000-plus strategic targets with precision accuracy. Such strikes could not possibly have occurred without superior intelligence. Included in those targets were Hamas intelligence and operational centers, rocket caches, missile-launchers, drones, naval installations and a sophisticated underground tunnel network.

Israel brilliantly manipulated Twitter and mainstream media to announce a ground invasion early on into the Gaza Strip to serve as a decoy to lure Hamas fighters into the tunnels. With terrorists inside, Israel destroyed the entire tunnel network before alerting the media that the announcement had been a mistake.
The number of Palestinian civilian casualties at the hands of an Israeli military that struck those 1,000 targets was unmistakably and near-impossibly low for wartime conditions. Unlike previous operations in 2006 in Southern Lebanon and 2014 in Gaza, the 2021 operation was not highlighted by any lack of preparedness, military miscues, cross-border infiltrations, kidnappings or killing of Israeli soldiers.
Despite what critics of Israel's government might state, the Israel Defense Forces did its job admirably. Malign actors across the region from Hezbollah in Southern Lebanon to Iran's Islamic Revolutionary Guard Corps in Iran are sure to have taken notice. The military achievement is a continuation of ongoing successful Israeli airstrikes in Syria, as well as covert operations inside Iran.
2. Hamas suffered a military humiliation
Well more than 4,000 rockets and 62 miles of tunnel networks that took years of development and cost hundreds of millions if not billions to construct killed a grand total of 12 people in Israel before being utterly decimated. Furthermore, some 650 of the rockets fired at Israel landed inside the Gaza Strip.
It is believed that at least 60 of the casualties inside Gaza were caused by Hamas rockets, including an entire family of eight. To put it into better perspective, Hamas killed more Gazans with their rockets than they killed Israelis.
Despite the celebratory fireworks, Hamas was completely humiliated. In terms of military strategy, Hamas is an unmitigated disaster. Israelis know it, as do Palestinians. It will take Gaza and its terror gang Hamas years to recover.
3. Gaza is not the most dangerous Palestinian battlefront
While Israel did all it could to focus attention on Hamas inside Gaza, the southwestern Palestinian enclave is only one front in a larger battle against the Jewish state. Gaza is relatively easy to bombard from the air, while Gazans beyond a border fence cannot commit individual acts of terror inside Israel.
In the Palestinian Authority-controlled areas of the West Bank--known in Israel as Judea and Samaria--factions including Fatah and Hamas are jockeying for power, as aging kleptocrat Mahmoud Abbas continues to lose his grip on a fed-up Palestinian street. One tried-and-true method for gaining popularity among the Palestinian public has been launching terror campaigns against Israel.

Within Israeli territory, more than a million Arabs hold Israeli identity cards. Many are registered voters. Yet with the exception of a few mixed cities, most live in segregated enclaves, as is the situation in Jerusalem.
Rioting and lynching attempts in cities such as Lod, Bat Yam, Jaffa, Ramle, Akko, Haifa, Tiberias and Jerusalem leading up to and during the Gaza conflict demonstrate that internal hostilities remain a risk.
Though incidents have not reached top headlines, there has been an increase in attacks, including a recent drive-by shooting that killed one and seriously wounded two other Israelis two weeks ago in Samaria. Two Israelis were stabbed during a terror attack at a Jerusalem light-rail station on Monday.
Just because a ceasefire has been declared in Gaza does not necessarily mean all Israeli-Palestinian hostilities are over. Cooler heads may prevail and calm may be restored, but a new intifada may be lurking around the corner. The IDF and an understaffed police force may not be as well-equipped to handle a surge in urban domestic terror.
4. Narrative warfare: It all started when he hit me back
Regardless of measures Israel may have futilely attempted to reduce and avoid hostilities, Hamas--with aid from Western media--had already constructed its narrative: Hamas had no choice but to fire rockets from Gaza once Israeli police had "stormed the Al-Aqsa mosque."
It makes no difference in the narrative war that Israeli police entered the complex to break up riots, where Arabs were tossing Molotov cocktails, shooting fireworks and throwing stones at Jewish worshippers at the Western Wall prayer complex some 70 meters below.
The narrative claims that an annual Jerusalem Day parade is now a "far-right nationalist" event that "stoked tensions." Similarly, the narrative insists that a war was necessitated over the eviction of 13 families from the Palestinian neighborhood of Sheikh Jarrah. The neighborhood is also home to the Jewish holy gravesite of "Simon the Righteous" ("Shimon HaTzadik").