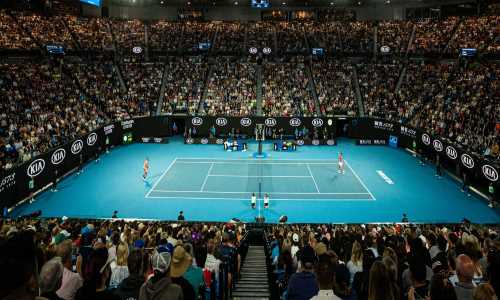 Former British number one Andy Murray has been eliminated at the Australian Open after losing to Japan’s Taro Daniel in the second round of the Grand Slam. Following a decent effort at the Sydney Open in preparation for this tournament, followers of the Scotsman had hoped to see him back to his best in Australia. There were even a few whispers that he could go and win the title, aided by the exclusion of Serbia’s Novak Djokovic but the test proved a step too far for the injury-plagued star.

Despite being hot favorite in the betting with online gambling giant Bovada to defeat Daniel and progress to the third round with a confidence boosting win, what fans got from Andy was a subdued performance. He will now return to the drawing board in an attempt to salvage his career. Murray has the French Open, US Open and the Wimbledon Championships still to come and he’ll be determined to perform much better in those competitions, especially on the lawns of London.

With Murray taken out in straight sets by a virtual unknown, the Australian Open men’s pack takes on a whole new look and feel. Djokovic’s much publicised ban on taking part due to VISA issues concerning COVID-19 and Murray now travelling home to rest and recover, who will be the 2022 Australian Open champion? With a competitive field left behind, it’s anyone’s guess who will come out on top. In this article, we shine a spotlight on some of the main contenders and look at how the major bookmakers rate their chances.

Daniil Medvedev is the new firm favorite to win the Australian Open and he has already been performing well, winning matches without ever hitting top gear. The 25-year-old Russian is currently ranked number two in the world and although that is his highest achievement in the rankings, there’s popular belief that he will improve a place sooner rather than later. Victory in the Australian Open could be enough to shunt him to the top of the pile and that will be the driving force that keeps the man from Moscow winning.

Medvedev has just one Grand Slam victory to his name so far with the spare coming at the US Open in 2021. That success came hot on the heels of an impressive performance in Melbourne earlier that year when making it all the way to the final. It looked like he would finish as champion of the Australian Open in 2021 but came up just short. The agony of that day will be fresh in his mind as he pushes hard to finally get over the line and add his name to an illustrious list of champions.

2021 was a successful year for Daniil who made it to the quarter finals of the French Open in Paris but managed no better than the fourth round of the Wimbledon Championships in London. He is a young, hungry, ambitious and supremely talented tennis player and many experts believe he will be the next star of the sport. Following the golden age of Murray, Djokovic, Rafael Nadal and Roger Federer, could Medvedev be the one to keep tennis going and the crowds packed into arenas?

There is no doubt he has the ability to win the Australian Open and if that success doesn’t come this year then, surely, it can’t be too far away. He caught the eye earlier this week when winning his round of 64 match with Australia’s Kyrgios in four sets. The scoreboard at the end of that pulsating match read 3-1 in the Russian’s favour and although the beaten man put up a strong fight, the victor could not be grudged his success.

Nadal takes it in his stride

Another stand out performer from the second round of matches was Spain’s Nadal who cruised into the next phase. The multi-Grand Slam winning player had too much skill, class and experience for his opponent in midweek, blasting his way to an eye-catching 3-0 victory with Yannick Hanfmann forced to admit he lost to the much better player.

There was no disgrace in that loss for the German but Nadal now quickly moves on to the next stage and appears to be gathering pace, confidence and form with the passing of each set in Melbourne.