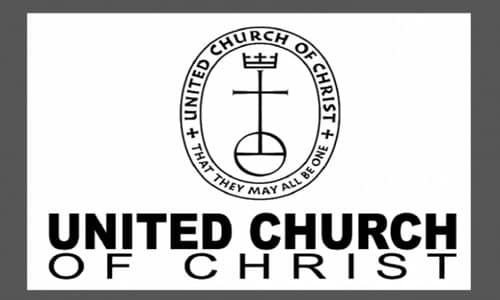 By Dexter Van Zile/JNS.org August 12, 2021
Share this article:
In July, the United Church of Christ's General Synod passed a "peacemaking" resolution that declared Israel guilty of sins against the Palestinian people. The resolution repeats the narrative broadcast by Palestinian Christians in the West Bank and eastern Jerusalem, who have been demonizing Israel for decades.
Predictably enough, the resolution, which was passed with 462 yeas, 78 nays and 18 abstentions in an online vote, made no mention of any sins perpetrated by the Palestinians or their leaders in the Gaza Strip or the West Bank.
For example, the resolution had nothing to say about the monthly stipends disbursed by the Palestinian Authority to imprisoned terrorists and their families, nothing about the anti-Jewish incitement broadcast by media outlets controlled by Fatah and Hamas, and nothing about the genocidal anti-Semitism broadcast during Friday sermons in the Al-Aqsa Mosque.

And the resolution said nothing about Hamas rocket attacks directed at civilians, nor about the refusal of Palestinian leaders to negotiate in good faith with Israel, having turned down numerous peace offers over the years.
With the passage of this resolution, the UCC's General Synod has revealed itself to be a bystander to anti-Jewish violence in the Holy Land, and a promoter of a dishonest narrative that justifies violence against Jews in the rest of the world.
The resolution speaks in vague terms about the evils of "supersessionism" and anti-Semitism but does not acknowledge the role these ideologies play in fomenting hostility towards Jews and Israel in Muslim-majority environments in the Middle East--nor the UCC's own role in fomenting this hatred.
The UCC resolution--the latest in a long list of anti-Semitic attacks--portrays the Jewish state as a singular source of sin and suffering in the Holy Land, recapitulating many of the messages Christians have offered about the Jewish people and their institutions over the past 2,000 years, even as the faith attempts to distance itself from this history.
"At a time when Jews are being physically attacked worldwide for their solidarity with Israel, suffering violence that clearly crosses the line from criticism of Israeli policies into blatant anti-Semitism, one could rightfully expect an American Christian church to be more guarded in its judgments," said Rabbi Noam Marans, director of Interreligious and Intergroup Relations for the American Jewish Committee.

"Where in this resolution for a 'just peace' is there any mention of Israel's relentless pursuit of peace for 73 years?" he asked.
Two things need to happen in response to the passage of the resolution. First, it's time to convene a beit din [Jewish religious court] to render a judgment on the UCC's decades-long war against the Jews and their state.
Second, it's time for rank-and-file Jews to reach out to local UCC churches and tell them that while the resolution was passed without any real input from the laity in the denomination, the people in the pews are ultimately responsible for the lies broadcast by their leaders in Cleveland and affirmed by the General Synod.
The beit din could and should declare that the UCC has repeatedly violated the prohibition against "talebearing" and against standing idly by when one's neighbor is threatened. These prohibitions are articulated in Leviticus 19:6.
The UCC has also violated the prohibition against bearing false witness, as delineated in Exodus 20:13.
In sum, the UCC engages in talebearing by retailing and repeating lies and propaganda produced by Israel's enemies; it bears false witness by omitting crucial information about the Arab-Israeli conflict in its so-called peacemaking resolutions; and it stands idly by the blood of its neighbor by refusing to condemn Palestinian terrorism and the lies used to justify it.
The evidence to support these charges is simply overwhelming.

In 2005, the UCC's General Synod passed a "Tear Down the Wall" resolution, which asked Israel to dismantle the security barrier it constructed to stop terror attacks from the West Bank without asking the Palestinians to stop the terror attacks that prompted its construction.
In 2015, the denomination's General Synod passed, with great fanfare, a resolution calling on the church's investment managers to sell their stock in specific companies that do business with Israel's defense establishment and operate in the West Bank. As it turns out, the staff who manage the denomination's pension fund and other holdings were legally obligated to ignore the Synod's call--a fact obscured in the fanfare surrounding the passage of the divestment resolution.
In 2017, two years after the denomination's General Synod passed the divestment resolution, the body passed a resolution condemning Israel's alleged mistreatment of Palestinian children detained in Israeli jails. The same resolution remained silent about Palestinian abuses of children, including the use of child labor to build smuggling tunnels between the Gaza Strip and Egypt, and Fatah and Hamas summer camps and other programs that give children guns and teach them to murder Jews.
To achieve approval of the resolution, anti-Israel activists in the UCC went so far as to coach teenagers into demonizing the Jewish state at the microphone on the floor of the General Synod. During the proceedings, one youth delegate asked, "How can we be paying an incredibly high amount of tax dollars to a country that values the torturous interrogation of children?"
The denomination is teaching its children to demonize Israel and to be voyeuristic bystanders to violence against Jews.
Jews and Christians alike must reach out to the lay members of the denomination about the misdeeds perpetrated by a coalition of anti-Israel extremists who have fomented hostility toward the Jewish state and the Jewish people for far too long.
Originally published at JNS.org - reposted with permission.