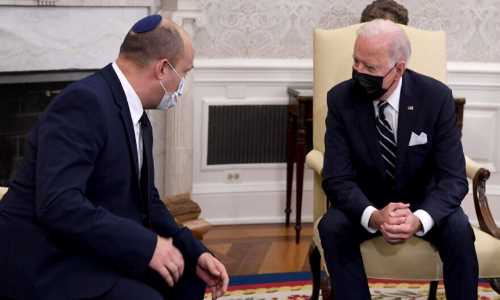 By Jonathan Tobin/JNS.org September 04, 2021
Share this article:
The reviews at home were mixed for Israeli Prime Minister Naftali Bennett's first meeting with President Joe Biden. Many of those who despise Bennett's right-wing principles thought he did a good job, while most of those who share his views were appalled by his performance.
The disconnect is understandable. The drumbeat of personal invective against Bennett from former allies and friends has been constant since he assumed the role of leader of the current coalition in June. For those who think Bennett "betrayed" the right by joining with left-wingers, Arabs and right-wing critics of former Prime Minister Benjamin Netanyahu, everything he does is always going to be wrong.
Those critiques became even more shrill observing Bennett's meeting with Biden as the prime minister did his best to ingratiate the president. Coming as it did in the middle of a nightmarish week for Biden as his precipitate and disastrous flight from Afghanistan went from bad to worse (the event was put off by a day because of the terrorist attacks in Kabul that took the lives of 13 American personnel), Bennett's conspicuous public flattery was hard to miss.

The rest of the world--from European allies to domestic opponents--excoriated Biden and noted his tired, petulant demeanor and often wildly inaccurate and disingenuous defenses of his policy and its inept execution. But Bennett was assigned the role of the faithful friend who was there to momentarily distract us from the horror show.
He did so by recycling old clichés about the strength of the U.S.-Israel alliance, and Biden's long and sometimes ambivalent role in promoting it. Bennett spoke with all of the fervor and obsequiousness that was required, and the spectacle disgusted Netanyahu supporters who take the same dim view of the president as Biden's Republican opponents.
They forget that Netanyahu would have done the same thing had he still been prime minister. Staying as close as possible to whoever it is that happens to be sitting in the White House is one of the first duties of any Israeli prime minister.
The open breach between Netanyahu and former President Barack Obama in the aftermath of America's awful nuclear deal with Iran is all we tend to remember about the pair's interactions. But Bennett's detractors would do well to remember all the flattery the Likud leader lavished on Obama in the first year of his presidency, even as the new Democratic administration plotted to topple the Likud-led government at the start of Netanyahu's record 12-year run as prime minister.
The same was true at the beginning of Obama's second term, especially during his 2013 visit to Israel. Despite the abuse he took--on and off the record from administration aides--as long as there was a chance that Obama would do the right thing on Iran, Netanyahu continued the public flattery past the point when everyone had stopped believing a word of it.

In that same spirit, Bennett's sucking up continued even after the meetings between the two leaders as the Israeli's staff did their best to buck up the beleaguered White House. They dispensed quotes about (appearances to the contrary) how "sharp" Bennett found Biden to be and debunked claims that the president dozed off during the photo op since he merely briefly closed his eyes or looked down rather than, as protocol normally demands, at his guest.
You can roll your eyes at the absurdity of the Israelis' position, but Bennett was entirely right to play the part of the eager admirer. The stakes involved in gathering support against both nuclear and conventional threats from Iran and its terrorist auxiliaries are just too great for the prime minister to flinch from such flattery.
Even if the odds that the administration will turn back from its determination to repeat Obama's quest for a rapprochement with Tehran are slim, it's Bennett's job to seek every opportunity to make that point. And by providing Biden with public support at a moment when he desperately needed it, Bennett has put himself in a slightly stronger position to demand that the Americans not leave Israel and its Arab allies on their own in facing Iran.
If making nice with Biden will help preserve what's left of the illusion of bipartisanship about support for Israel, then that is what must be done. At a time when the Democratic Party is deeply divided between those who are friendly while critical of the Jewish state and those who are openly hostile to it, it's obligatory for Bennett to show that he is as interested in fostering support from Democrats as well as Republicans, who are almost universally supportive.
Even if Bennett gets the credit he deserves for letting the White House think it has a friend in Jerusalem, it would be foolish to put much credence in Biden's assurances.
Bennett pocketed an even more extravagant promise from Biden about stopping Iran's nuclear quest than the one he made during former Israeli President Reuven Rivlin's White House visit in June. At that time, Biden said Iran wouldn't get a nuke "on my watch."
That was utterly disingenuous since even if Biden can somehow entice or bribe the Iranians to re-enter the 2015 nuclear deal the Obama administration struck with Tehran, that wouldn't prevent the Islamic regime from acquiring a weapon after Biden left office. Indeed, the sunset clauses set to expire at the end of the decade now assure Iran of a legal path to a bomb.
According to Bennett, Biden pledged that Iran will "never be able to acquire a nuclear weapon."
That's nice to hear, but given the supine negotiating position of the United States in the stalled talks on the nuclear question going on in Vienna, it's hard to see why anyone should take that promise seriously.

Despite the rationalizations, we are hearing from Biden and his cheerleaders in the media, the fiasco that he presided over in Afghanistan only lessens the chance that Iran will take him seriously. The idea that the administration will pursue non-diplomatic options to stop Tehran's nuclear ambitions once they concede that diplomacy has failed is a fantasy.
That's true despite the fact that neither Biden nor White House spokesperson Jen Psaki is willing to say what those alternative options might be or even to hint that force would or could ever be used.
For Biden's foreign-policy team, diplomacy is an end to itself rather than a means to securing specific objectives in the interests of America and its allies. The belief of figures like Secretary of State Antony Blinken in multilateralism is ideological in nature more than anything else
For them, the merits of more sanctions or covert actions undertaken by Israel that have helped to sabotage or to delay Iran's nuclear progress are immaterial. Rather, as we have seen first with Obama and now Biden, Washington's attitude is not geared towards a strategy of how best to halt Iran's quest for regional hegemony and a nuclear weapon.
The administration is not capable of changing its policies even if Iran refuses to engage in diplomacy or if the Israelis put forward persuasive arguments about the need for urgent action. That's because their stands are rooted in sensibilities about how nations ought to behave, not what will actually work to achieve the goal of stopping Iran.
So, while Bennett is doing the right thing in pursuing a friendship with Biden, it's almost certain to be of little help in securing his country's interests. That's cold comfort for Israelis, who would like to believe that having someone not named Netanyahu in charge will make it easier to rally America to come to its senses on Iran. But it is nonetheless a reality that they must accept as they ponder the next three years when--happy talk in Washington notwithstanding--they are likely to be left on their own against Iran.
Originally published at JNS.org - reposted with permission.