Feeding The Taliban - Did Woke/Leftist Policies Contribute To Failure? 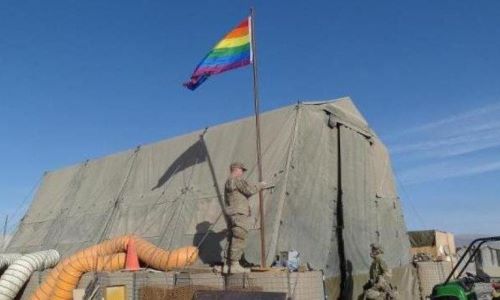 By Jonathon Van Maren/Bridgehead.ca September 09, 2021
Share this article:
Why did the United States of America, the world's greatest superpower, lose the war in Afghanistan? That question will be debated for decades, and a few embryonic theories are already emerging. Ross Douthat's savage evisceration of the American elites in the New York Times is, if not the reigning theory, at least the first salvo.
There are political and military explanations aplenty, and there is much we do not yet know. But there is another consideration to consider, as well: The United States no longer promotes freedom and democracy.
It promotes decadence--abortion, the LGBT agenda, and other forms of liberation that most peoples in most places around the world still believe to be immoral. The post-Christian West cannot export values that it does not have.
There were many snarky comments about the U.S. Embassy in Kabul tweeting out the Pride flag weeks before their hasty retreat as the bearded avatars of toxic masculinity approached with their Kalashnikovs. It seemed an apt contrast between a culture in decline and one with total faith in itself, as young men in pickup trucks humiliated an empire.

Before he launched his second act producing political propaganda films, Dinesh D'Souza was a serious conservative writer--and his most interesting and unpopular book was The Enemy at Home: The Cultural Left and Its Responsibility for 9/11, published in 2007. Everyone hated it--but D'Souza made some compelling points, and some of his analysis is now becoming more mainstream on the Right. He writes, for example:
The cultural left has fostered a decadent American culture that angers and repulses traditional societies, especially those in the Islamic world that are being overwhelmed by this culture. In addition, the left is waging an aggressive global campaign to undermine the traditional patriarchal family and to promote secular values in non-Western cultures.
This campaign has provoked a violent reaction from Muslims who believe that their most cherished beliefs and institutions are under assault...Thus when leading figures on the left say, 'We made them do this to us,' in a sense they are correct. They are not correct that America is to blame. But their statement is true in that their actions and their America are responsible for fostering Islamic anti-Americanism in general.
D'Souza carefully combed through the speeches and statements of various Islamists (including Osama bin Laden) and pointed out that more often than not, it wasn't "freedom" and "democracy" that terrorists and theologians were condemning--although obviously, they despised those things, too. It was the manifest decadence of the West that drew their contempt. The West had made "freedom" look bad because to many, it represented the sort of thing showcased by Hollywood, the porn industry, and fracturing societies that couldn't even distinguish between the sexes (and thought men could get pregnant, to boot.)
The post-invasion memoirs of Iraqi general Georges Sada, Saddam's Secrets: How an Iraqi General Defied and Survived Saddam Hussein, captured the cultural conflict well. Sada, while generally complimentary of the United States and the comportment of its troops in Iraq, noted: "We're more conservative about matters concerning women and girls, especially their clothing.
Not very many women in Iraq wear the veil anymore--we're already Western in that way...But why should a young woman walk around with half her body exposed, as teenagers in America do? Any teenage boy would be glad to see a girl dressed in that way, but our culture is not prepared for it. Modesty is a good thing and I hope we never lose it."

You can hate that sentiment, but you shouldn't ignore it. Many conservatives thought that the enemies of America called her the Great Satan because she was Christian, and never considered that it had more to do with the fact that America was not Christian enough.
The Spectator published a compelling column last month titled "Did 'gender studies' lose Afghanistan?" It is a title that seems ridiculous until you read Cockburn's case. American colonialism, he writes, amounted to "half-baked social engineering," so "alongside the billions for bombs went hundreds of millions for gender studies in Afghanistan.
According to US government reports, $787 million was spent on gender programs in Afghanistan, but that substantially understates the actual total, since gender goals were folded into practically every undertaking America made in the country." As Cockburn wrote:
A recent report from the Special Inspector General for Afghanistan Reconstruction (SIGAR) broke down the difficulties of the project. For starters, in both Dari and Pastho there are no words for 'gender'. That makes sense, since the distinction between 'sex' and 'gender' was only invented by a sexually-abusive child psychiatrist in the 1960s, but evidently Americans were caught off-guard.
Things didn't improve from there. Under the US's guidance, Afghanistan's 2004 constitution set a 27 percent quota for women in the lower house -- higher than the actual figure in America! A strategy that sometimes required having women represent provinces they had never actually been to. Remarkably, this experiment in 'democracy' created a government few were willing to fight for, let alone die for.
The initiatives piled up one after another. Do-gooders established a 'National Masculinity Alliance', so a few hundred Afghan men could talk about their 'gender roles' and 'examine male attitudes that are harmful to women'.
It is boggling to read what America was attempting, especially in the wake of the chaotic, corpse-strewn retreat from Afghanistan last month. The Americans set a goal of 10% female participation in the Afghan army. A USAID observer stated that "the gender ideology in American aid routinely caused rebellions out in the provinces, directly causing the instability America was supposedly fighting."
The U.S. bribed Afghanistan's parliament to get various gender initiatives through. Believe it or not, they even tried to teach the Afghans about Marcel Duchamp (who infamously signed a urinal with the initial "R" and called it art.)

The meeting of cultures is captured on video. As an enthused young American woman shows Afghan women a photo of the toilet, one shakes her head in disbelief. It is at that moment, Cockburn half-jokes, that the American mission in Afghanistan failed. Your culture has to be in severe decline before you consider a busted urinal to be "art"--although it is the sort of art you could probably smuggle past the Taliban, who would likely not recognize it as such.
It is not only what the U.S. was trying to implement in Afghanistan--it was also what the Americans declined to root out. Over two decades of occupation, America failed to stop bacha bazi, the Afghan custom of men molesting boys (the infamous so-called "dancing boys.") The Taliban had more or less halted the practice, brutally punishing any offender, but the Afghan forces allied with NATO were frequently perpetrators. CIA operatives were known to give aging Afghan warlords Viagra, knowing what it would be used for.
In fact, American troops discovering this grotesque practice were often enraged. Back in 2015, CNN reported that Sergeant 1st Class Charles Martland, a Green Beret, had attacked an Afghan police commander, body slamming and kicking him. Martland stated that the police officer was a "brutal child rapist." The Pentagon tried to put Martland under a gag order, but he released a statement anyway:
Our ALP (Afghan Local Police) were committing atrocities and we were quickly losing the support of the local populace. The severity of the rapes and the lack of action by the Afghan Government caused many of the locals to view our ALP as worse than the Taliban...While I understand that a military lawyer can say that I was legally wrong, we felt a moral obligation to act.
The police commander had kidnapped an Afghan boy and kept him in his home. The boy's mother had been beaten when she tried to rescue her boy. Once the details of this were confirmed, Martland beat the police commander--and was evicted from the military. Sergeant Charles Martland was kicked out of the Army for rescuing an Afghan boy from a brutal rapist--because the rapist was an American ally, and interfering wasn't his job. Gender studies? Female participation in the army? Bribing parliament to change their culture and standards? Not colonialism. Beating a child rapist? Unacceptable.
In short, the West is confident enough to promote the worst aspects of a culture in decline and is not confident enough to halt clearly evil practices when it encounters them. The Afghans got gender studies, Marchel Duchamp, and bacha bazi. Are we surprised that it didn't take?
Obviously, many good things were done as well. Women and girls could access education (not all of which was the sort of garbage prized by the elites). Schools were built. Public executions and beatings were halted. These developments were valuable, and there is no doubt that life under American occupation was infinitely better than it will be as Afghanistan enters an endless dark age under the Taliban, with the Afghans assured of the inescapable fact that nobody will be coming to rescue them this time.
But the simple fact is that America was utterly ill-equipped to be a colonial power for moral reasons as well as military and political ones.
In contrast, I think of an anecdote Mark Steyn recounted in his War on Terror classic America Alone. When the British colonial forces arrived in India, they encountered sati, the practice of burning Indian widows on the funeral pyres of their husbands. At first, they ignored it, considering it outside their mandate to limit the cultural practices of others.
However, Christian influences in Great Britain soon effected a change in policy, and the British view began to change. The British officer Charles Napier is famous for his response to several Hindu priests who complained about the prohibition of widow-burning. According to his brother William, Napier responded:
Be it so. This burning of widows is your custom; prepare the funeral pile. But my nation has also a custom. When men burn women alive we hang them, and confiscate all their property. My carpenters shall therefore erect gibbets on which to hang all concerned when the widow is consumed. Let us all act according to national customs.
Those are the words of a man who understands his culture and his beliefs, and has confidence in them. Napier, like Sergeant Martland, knew evil when he saw it--and didn't come to bring gender studies and Marchel Duchamp.
Originally published at The Bridgehead - reposted with permission.