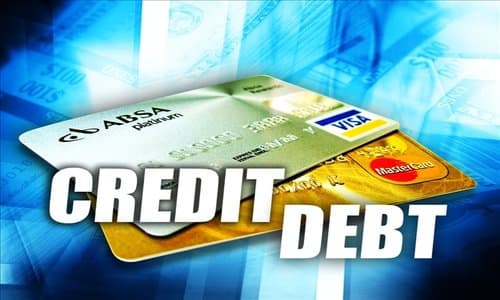 By Tyler Durden/Activist Post January 08, 2022
Share this article:
While it is traditionally viewed as a B-grade indicator, the November consumer credit report from the Federal Reserve was an absolute stunner and confirmed what we have been saying for months: any excess savings accumulated by the US middle class are long gone, and in their place Americans have unleashed a credit-card fueled spending spree.
Here are the shocking numbers: in November, consumer credit exploded by a whopping $40 billion, double the expected $20 billion print, more than double the $16 billion October number, and the highest on record!
And while non-revolving credit (student and car loans) jumped by a solid, if not necessarily remarkable $20 billion, this was only the 7th biggest increase for the series in record.
The real stunner was revolving, or credit card debt, which more than tripled in November, soaring to $19.8 billion from $6.6 billion in October, by far the highest such print on record.
While this unprecedented rush to buy everything on credit ahead of and during the Thanksgiving holiday should not come as much of a surprise, after all we have repeatedly shown that for the middle class any "excess savings" are now gone, long gone.
The fact is that most economists - such as those at Goldman Sachs - anticipate that continued spending of savings is what will keep the US economy levitating in 2022.
Unfortunately, as today's consumer credit numbers clearly demonstrate, any savings that US middle class households may have had courtesy of stimulus checks, are now gone.
The implications are profound: any model that projected that US spending will be fueled by "savings" can now be trashed. And since this is most of them, the consequences are dire as they confirm - once again - that the Fed is tapering, QTing and hiking right into a recession.
Originally published at Activist Post - reposted with permission.