Is Ukraine In The Ezekiel 38 Bible Prophecy? 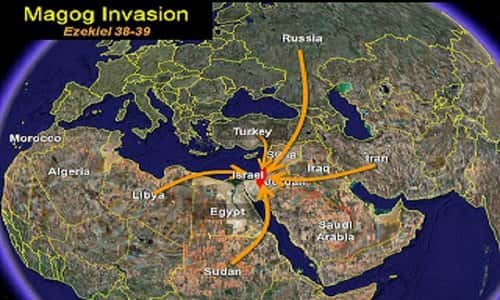 By Bill Salus March 01, 2022
Share this article:
About 2600 years ago, the Hebrew prophet named Ezekiel issued a biblical prophecy that is going to find fulfillment in the "latter days." The prophet writes:
"You will come up against My people Israel like a cloud, to cover the land. It will be in the latter days that I will bring you against My land, so that the nations may know Me, when I am hallowed in you, O Gog, before their eyes." (Ezekiel 38:16)
The "you" in this verse is commonly taught to represent whoever the president of Russia is going to be in the biblical "latter days." Many prophecy experts sincerely believe that these are the "latter days" spoken about by Ezekiel. Some even posit the possibility that Vladimir Putin could be the Russian leader of this prophecy. Wisely, these advocates caveat that this depends on the longevity of Putin tenure in relationship to the timing of the fulfillment of Ezekiel's prophecy.

This thinking is possibly supported by another detail of the prophecy written in the passage below.
"'Thus says the Lord God: "On that day it shall come to pass that thoughts will arise in your (Russian President's) mind, and you will make an evil plan." (Ezekiel 38:10; emphasis added)
In light of Russia's unprovoked invasion of Ukraine on February 24, 2022, thoughts of "an evil plan" by a Russian President in the biblical latter days has happened. Although the evil plan of this above verse relates to Israel, and not Ukraine, it could provide hints of a similar sinister attack, probably in the near future, that gets plotted against the Jewish state.
This ancient prophecy foretells that this Russian leader will form a coalition of predominantly Muslim nations to invade Israel from the uttermost parts of the north. According to Ezekiel 38:13 the motives of these belligerents is, "to take booty, to carry away silver and gold, to take away livestock and goods, to take great plunder."
The question some Bible prophecy pundits are asking lately is, "Does Ukraine join in this Russian coalition?" So, I asked a few of today's top experts on this prophecy what they think about this possibility.
I asked this question on February 8, 2022, and prefaced is as follows:
"You are among today's top scholars on the who's who of the Magog invaders in Ezekiel 38. In light of Russia's hints of invading Ukraine, I'm getting asked more and more, if Ukraine is among the Magog invaders. Some emailers suggest that the Scythians dwelt there, at least in the eastern part, and also trailed on into the Russian Steppes.
I'm personally hesitant to put Ukraine in the menu of the Magog invaders, but I do acknowledge that the historic connection between the Scythians and modern-day Russia, did trail through Eastern Ukraine. This is my opinion, but what say you all?"
Included below are the comments from this elite group of Bible prophecy authors and teachers.

Dr. Ron Rhodes, the author of the book entitled, Northern Storm Rising: Russia, Iran, and the Emerging End-Times Military Coalition Against Israel. Dr. Rhodes presented several interesting comments to contemplate in his response.
"I do not know of any references to Ukraine in the Bible. Thus, I would be hesitant to put Ukraine in the menu of the Ezekiel invaders. After all, Ezekiel 36:1-6 is pretty specific. If Ukraine was to be a part of the invading force, why not mention it?... That said, there are a few qualifications to add:
Is it possible that ancient ROSH, (modern-day Russia), had boundaries larger than present day Russia... Biblical Persia, (modern-day Iran), was much larger than modern Iran. This leads me to wonder if biblical Rosh was larger than modern day Russia. Did the boundaries extend east to such a degree that it might include modern Ukraine. Again, I don't know. I'm just raising the issue.
The only passage that "may" provide a clue is Ezekiel 38:9, which speaks about the entire invading force: "You will advance, coming on like a storm. You will be like a cloud covering the land, you and all your hordes, AND MANY PEOPLES WITH YOU" (emphasis added)...
Who are the "many peoples with you." Are the "many peoples" a collective phrase referring to all the nations mentioned earlier in Ezekiel 38? It's possible. After all, Ezekiel 38:6 uses the terms "hordes" and "many peoples" specifically of the massive invading forces. So, likewise, verse 9 -- which refers to the entire collective invading force -- may use the terms "hordes" and "many peoples" of the nations described earlier in Ezekiel 38...
An alternative view, however, is the possibility that "many peoples" might include other peoples "besides" the specific nations mentioned earlier in Ezekiel 38. Perhaps "many peoples" includes allies of the Ezekiel nations. If this view is correct, Ukraine might be included.
Of course, all this is highly speculative, and I could be wrong. I suspect some might respond that this is nothing but "newspaper exegesis," or perhaps eisogesis. Caution is therefore urged."
Dr. Rhodes is hesitant, like me, "to put Ukraine in the menu of the Ezekiel invaders." However, he doesn't completely rule out the possibility. He keeps the door open that the coalition brings with it "many people" and that might include Ukraine.

Nathan Jones of Lamb and Lion Ministries and co-host of Christ in Prophecy TV.
"In my research for a paper/presentation about the Gog-Magog War I put together for one of my doctoral classes, I found nothing to indicate that Ukraine plays a role in the Gog-Magog War."
Like Dr. Rhodes, Nathan Jones doesn't find anything clear and concise "to indicate that the Ukraine plays a role in the Gog-Magog War."
Dr. Andy Woods, the author of the book, The Middle East Meltdown: The Coming Islamic Invasion of Israel.
"Ukraine is part of the ancient Russian empire, which Putin apparently has ambitions to rebuild. So, if Putin invades Ukraine, Russia then would achieve nearly full stature of her ancient status as an empire, which potentially would set the stage to an even greater extent for the future Gog-Magog invasion."
Dr. Woods seems to be open to the possibility that Ukraine might be part of the coalition, if invaded and taken over by Russia.
Dr. Mark Hitchcock, the author of the book entitled, Showdown with Iran: Nuclear Iran and the Future of Israel, the Middle East, and the United States in Bible Prophecy.
"I don't have much to add to what Dr. Andy Woods and Dr. Ron Rhodes have said. Ukraine could also be part of ancient Magog. What's happening is additional evidence of Russian aggression and hegemony but is not required as part of Ezekiel 38."
Dr. Hitchcock, who had previously read the comments of Dr. Woods and Dr. Rhodes, leaves open the possibility that "Ukraine could also be part of ancient Magog." Magog, meaning modern-day Russia. Both Rosh and Magog are identified in Ezekiel 38:2 and thought to both represent modern-day Russia.
It seems safe to suggest that if Russia conquers Ukraine, that Ukraine could very well be listed among the Russian coalition. This is why Russia's invasion of Ukraine, just might have prophetic implications.
The Ezekiel 38 and 39 prophecy is important to understand because it is the marquee prophetic event in the latter days that God has chosen to put the world on official notice that He is the One True God. The prophet writes:
"So I will make My holy name known in the midst of My people Israel, and I will not let them profane My holy name anymore. Then the nations shall know that I am the Lord, the Holy One in Israel. Surely it is coming, and it shall be done," says the Lord God. This is the day of which I have spoken." (Ezekiel 38:7-8)
If you want to discover how the LORD supernaturally defeats the Magog invaders, shocks the watching world and explore all the other fascinating details about this prophecy, then I encourage you to pick up a copy of the just released 3-disc DVD entitled, Ezekiel 38: When God Defends Israel, the Coming Russian-Iranian Led Invasion of the Promised Land - available here.