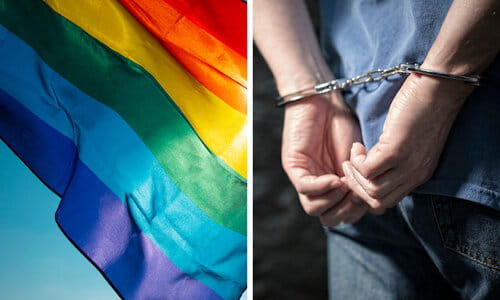 By Jonathon Van Maren/Bridgehead.ca May 19, 2022
Share this article:
I've been saying for some time that the "pronoun wars" have nothing to do with courtesy and everything to do with affirming or rejecting a view of the world that proponents of gender theory are trying to promote. Many trans activists and their allies are eager to present their demands as a mere matter of courtesy. Just stop being so difficult, they say.
How does it hurt you to call someone what they want to be called? We're not asking you to believe it, in your heart of hearts. We're just asking you to play along in public. Although they don't say it out loud, those of us listening closely can hear their silent conclusion: for now.

There are plenty of examples of this, of course. Trans activists regularly accuse people of "violence" for "misgendering" by using the "wrong" pronouns, even by accident. Radical feminists have been kicked off Twitter for pointing out that their male interlocutors are... male, regardless of their shoddy attempts at disguise. And in the U.K., which for some reason has become the ground zero of the gender wars, ordinary folks have been visited by the police and even fined simply for using the "wrong" pronouns (which is to say, the right ones.)
Now, a Wisconsin school district has actually filed a Title IX charge against three students in Kiel Middle School for simply using the "wrong pronouns" while speaking to another student. Rosemary Rabidoux, the mother of one of the accused students, told Fox 11 that her son is actually being accused of a sexual crime: "I received a phone call from the principal over at the elementary school, forewarning me; letting me know that I was going to be receiving an email with sexual harassment allegations against my son."

Rabidoux, understandably, was horrified. Her son Braden is only thirteen. "I immediately went into shock," she said. "I'm thinking, sexual harassment? That's rape, that's inappropriate touching, that's incest. What has my son done?"
Nothing, as it turns out. When Rabidoux was told by the investigating principal what he was actually being charged with--"not using proper pronouns"--she was furious. "I thought it wasn't real," she said. "I thought this has got to be a gag, a joke--one has nothing to do with the other." The Wisconsin Institute for Law & Liberty, whose attorneys are defending the three students, agreed, calling the complaint "inappropriate" and calling for the charges to be "immediately dismissed.
Further, they noted: "The mere use of biologically correct pronouns not only does not constitute sexual harassment under Title IX or the District's own policy, it is also speech protected by the First Amendment. The District has also violated Title IX procedures and its own policy in its handling of the complaint. The District should promptly end the investigation, dismiss the complaints, and remove them from each of the boys' records." They noted that the only charge against the boys was "mispronouning."

"'Mispronouning' is also not sexual harassment under Title IX because gender identity is not included within the definition of sex within Title IX. In fact, the Department of Education is currently attempting to amend Title IX to add it," but "mispronouning" does not come "remotely close to sexual harassment."
Other students have also "expressed frustration with remembering pronouns." The pronouns allegedly not being used were so-called "non-binary" "they/them" pronouns. The accused students may have teased other kids, the attorneys concluded, but "none of this warrants accusations of sexual harassment and the serious reputational harm that comes with it."
The parents of these three accused students--attempting to navigate the seismic changes the LGBT movement has unleashed on the public school system over the past few years--have unfortunately learned how progressives see their kids the hard way. As President Joe Biden himself said while addressing teachers: "They are not somebody else's children. They're yours when you're in the classroom."
Originally published at The Bridgehead - reposted with permission.