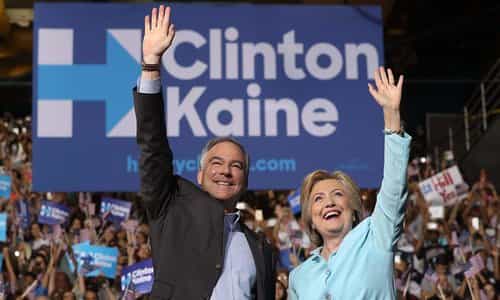 By Michael Brown/Askdrbrown.org September 13, 2016
Share this article:
Speaking at the Human Rights Campaign's annual Washington, DC dinner, Democratic vice-presidential nominee Tim Kaine butchered the Bible and made one of the most twisted arguments for same-sex "marriage" that you'll ever hear. Yet the very article laying out his arguments described him as a "devout" Roman Catholic. How can this be?

Putting aside the obvious question of how Kaine could serve on a presidential ticket with the radically pro-abortion candidate Hillary Clinton - indeed, he has already been challenged for "saying he is both a 'traditional Catholic' and a strong supporter of abortion" - Kaine raised further eyebrows when suggesting that the Catholic Church could one day change its position on same-sex "marriage," just as he has done.
In support of his viewpoint, he cited Pope Francis's oft-quoted comment about gay Catholics ("Who am I to judge?"), failing to realize that the Pope was not sanctioning homosexual acts and relationships but rather saying, "If someone is same-sex attracted and wants to be part of the Church, who am I to judge?"
This is very different from saying, "If two men are in love and want to have a romantic and sexual relationship, who am I to judge?"
But I am not a Catholic, nor can I predict where the Roman Catholic Church will be in 5 or 50 years.
What I can say with certainty is that Sen. Kaine's use of Genesis 1 to buttress his support of LGBT activism amounts to scriptural malpractrice.
He said, "I think it's going to change because my church also teaches me about a creator who, in the first chapter of Genesis, surveyed the entire world, including mankind, and said, 'It is very good.'"
And, he added, "Who am I to challenge God for the beautiful diversity of the human family? I think we're supposed to celebrate it, not challenge it."
Seriously? Kaine is going to Genesis 1 to argue for same-sex "marriage," along with the larger LGBT agenda?
Allow me to give a helpful hint to the senator: Sir, although you will find no support for your position anywhere in the Bible, the worst place you can go to argue your case is Genesis.
It is in Genesis 1 that we see the importance of gender distinctions, as God creates humankind as male and female - not as male, female, and an infinite number of variations, including agender, bigender, and third gender, along with multi-gender options like ambigender, bigender, blurgender, collgender, conflictgender, cosmicgender, crystagender, deliciagender, duragender, demiflux, domgender, fissgender, gemelgender, gendercluster, genderfluid, gendersea, genderfuzz, genderfractal, genderspiral, genderswirl, gendervex, gyaragender, libragender, ogligender, pangender, polygender, and trigender.
Is this what Kaine was referring when he spoke of "the beautiful diversity of the human family" that we should celebrate?

Genesis 1 states the exact opposite.
It is also in Genesis 1 that God blesses His human creation with the words, "be fruitful and multiply," and it is only heterosexuals, by design, who can do this. That's why, to this moment, no homosexual couple has ever been blessed by God with the ability to procreate by themselves.
This sets the pattern for the rest of the Bible, where the only marital relationships blessed by God, without exception, are heterosexual, with the male and female being uniquely designed for one another biologically, emotionally, and spiritually.
Accordingly, it is based on Genesis 1 that Paul explains in Romans 1 that homosexual acts are contrary to nature - meaning, contrary to God's intended, natural plan for men and women.
And it is based on Genesis 1 that Jesus explains in Matthew 19 that marriage, as intended by God from the beginning, is the lifelong union of a man and a woman.
Does Sen. Kaine now have insight into Genesis 1 that not only escaped his own Catholic Church, but Jesus and Paul as well?
As for Kaine's argument that when the Creator "surveyed the entire world, including mankind [He] said, 'It is very good'," - meaning that homosexuality and bisexuality and more are all good - he seems to have forgotten that "very good" was God's description of His creation before the fall, when sin entered the world.
After the fall, His assessment changed dramatically to this: "The LORD saw that the wickedness of man was great in the earth, and that every intention of the thoughts of his heart was only evil continually" (Genesis 6:5).
So much for the "very good" assessment applying to human nature today!
As expressed by Jesus, "what comes out of the mouth proceeds from the heart, and this defiles a person. For out of the heart come evil thoughts, murder, adultery, sexual immorality, theft, false witness, slander" (Matthew 15:18-19).
And note carefully that the Greek word for sexual immorality, porneia, is used in the plural here, referring to all sexual acts outside of marriage, which Jesus defined as the union of one man and one woman (see Matthew 19:4-6).
So, the very thing that Sen. Kaine wants to celebrate, the very "diversity" that he claims God established in creation, is the precise opposite of what God intended for His creation, as stated clearly in Genesis 1 and reaffirmed throughout the rest of the Bible, from Moses to Jesus to Paul.
Mrs. Clinton's running mate would do well to submit his thinking to the Scriptures rather than twisting the Scriptures to fit his thinking.
It is the senator who must change, not the Word of God.