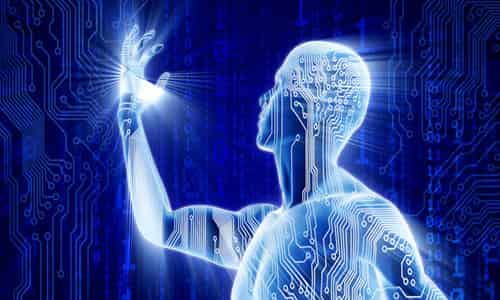 By Tom Olago January 25, 2016
Share this article:
Will there one day be a one-world religion? If so, what will it look like? Christianity, Islam, Hinduism, Buddhism, or any other particular faith in the world? Perhaps it would look somewhat agnostic, pagan, shamanistic, occultic or atheistic? Or even an ecumenical blend of all of the above? Perhaps even none of the above?

The Institute for Ethics and Emerging Technologies recently examined the area of Transhumanism and wondered if it might actually turn out to be 'mankinds final religion'. Dirk Bruere admitted that there were varied interpretations and definitions of what Transhumanism really is, but settled on the following one for reference:
"Transhumanism is a class of philosophies of life that seek the continuation and acceleration of the evolution of intelligent life beyond its currently human form and human limitations by means of science and technology, guided by life-promoting principles and values." (Max More 1990).
The average Transhumanist is typically male, likely to be an engineer or scientist, technologically savvy and could easily be one of a "non-negligible contingent of current or former occultists". His/her primary goals and ambitions include the elimination of aging, eternal existence via 'upward evolution', achieving super-intelligence and maximising the use of artificial intelligence, in such forms as Googles self-driving cars, applications like Apples Siri, intelligent robots and the like. Generally, anything that would help mankind to 'transcend humanity' would be considered part of the transhumanist exhaustive agenda.
Bruere further states that Transhumanist goals "address the deepest hopes and fears of the human mind  life, death, the afterlife, immortality, the nature of God(s) and the destiny of the universe". Sounds very much like your typical religion. However, the difference, based on Brueres controversial viewpoint, is that "unlike conventional religions they (transhumanists) seek hard engineering answers rather than ill-defined and ancient obfuscations".
The Transhumanist fraternity certainly has friends in high places and is not afraid to toot its own horn. Zoltan Istvan, US Presidential candidate of Transhumanist Party and Author of bestselling novel 'The Transhumanist Wager' described 2015 as a "great year for the transhumanism movement, "simply incredible" and a potential "breakout year".
Istvans reasons for being so delighted with 2015 were published in an article for the Huffington Post in late December. He focused on the wide and largely positive exposure given to the Transhumanist cause, predominantly via news websites, TV interviews and social media.
Troy Anderson for Charisma News recently reported on Istvans definition of Transhumanism: "Transhuman literally means beyond human. Transhumanists consist of life extensionists, techno-optimists, Singularitarians, biohackers, roboticists, AI (Artificial Intelligence) proponents, and futurists who embrace radical science and technology to improve the human condition. The most important aim for many transhumanists is to overcome human mortality, a goal some believe is achievable by 2045."
Anderson quoted Dr. Richard Lands reactions to the Transhuman goals and ideals. Dr. Land is President of the Southern Evangelical Seminary in Charlotte, North Carolina.

"The fact that we're trying to do this (artificially enhance human beings) is, to me, really high-tech eugenics... when we start permanently altering the genetics of the people involved that's going to have catastrophic consequences&you can see where that goes, it leads to Frankenstein monsters," said Land, who was recently named among the top 100 most influential Christian leaders in America.
"If, as Christians assume, man is the special creation of God with a soul and a spirit, bearing the image of God, no matter how flawed and warped it may be by sin, then human beings cannot be reconstructed by other humans as mere machinesvirtual or otherwise. There is indeed a divine spark in human beings that no man-created machine or technology can reproduce," Anderson said.
That wont stop the transhumanists from trying, as part of their culture seems to be to embrace a patronizing attitude towards people of faith and religion. The 'superior' transhumanist agenda aligns well with the pattern prophesied regarding the Anti-Christ, the Satan-indwelt end-time world leader who will appear to personify the ultimate goals of transhumanism.
Instead, he will use deception to feed into the age-old desire of mankind to replace God, or at the very least to be "like the Most High", while leading them into ultimate destruction.
Learn more about the Transhumanist Agenda with our Featured DVD - Inhuman