The Essential Difference Between Christianity And Islam 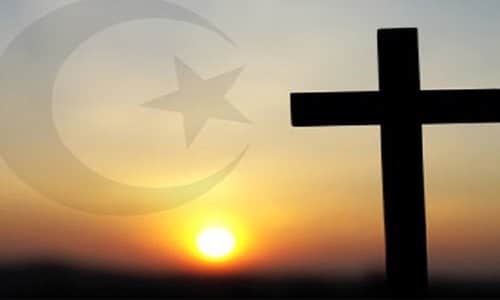 By Michael Brown/Ask Dr Brown June 26, 2017
Share this article:
The essential difference between Christianity and Islam is the difference between Jesus and Muhammad. Jesus was a spiritual leader who laid down His life to save the world.
Muhammad was a spiritual leader, who became a political leader, then a violent military leader. Jesus accomplished His mission by dying on the cross.
Muhammad accomplished his mission (at least in large part) by ruling by the sword.
There are, of course, great similarities between the world's two largest religions. Both point to a holy book, allegedly inspired by God, for faith and practice.
Both call for high moral standards and serious personal commitment.
Both share common traditions, since Muhammad learned from Jews as well as Christians. And both have a vision to spread their faith around the world.

But this is where the two faiths diverge. One follows the example of a crucified and risen Savior. The other follows the example of a prophet and military leader.
And so, the biblical verses of violence (as in, "Kill the Canaanites") were limited to a specific place and time, and no such commands are found on Jesus' lips.
The Quranic verses of violence (as in, "Kill the unbelievers wherever you find them") do not have such obvious limitations.
And so, while many Quranic interpreters and Islamic jurists claim that those verses cannot be applied indiscriminately today, others differ, proudly citing them in their jihadi manuals.
Again, the difference is that of the cross vs. the sword. That's why Jesus and His followers never established the death penalty for leaving the faith.
Muhammad established it once he assumed military dominance. And the death penalty for apostasy from Islam remains in force in a number Islamic countries today.
In the same spirit, Muhammad beheaded some of his enemies. Jesus forbade His followers from taking up the sword in His defense. The differences are glaring and clear.
Just compare the teachings of Jesus in the Gospels with those of Muhammad in the Hadith. Jesus never calls for violent acts against enemies of the faith; Muhammad often does.
That's why there's no gospel (or apostolic) equivalent to the lengthy collection of Muhammad's military raids.

Accordingly, the most tolerant expressions of Islam are found when: 1) Muslims are the minority in a country, as in America; or 2) the Muslim-dominated country is quite secular, as in Indonesia.
In contrast, in strictly observant Muslim countries, there is limited tolerance for non-Muslims.
If you don't believe me, try setting up a public Christian mission to Muslims in Saudi Arabia or Pakistan or Afghanistan or Iran. Tell me how many minutes it lasts.
I do commend those Muslims who call for a more tolerant expression of their faith, and they abhor the terrorism carried out in the name of their religion.
But if they are honest, they will have to admit that violent Islam has a long and rich history.
To quote the noted Catholic scholar of Islam Samir Kahlil Samir, "I speak about the violence expressed in the Qur'n and practiced in Muhammad's life in order to address the idea, widespread in the West, that the violence we see today is a deformation of Islam.
We must honestly admit that there are two readings of the Qur'n and the sunna (Islamic traditions connected to Muhammad): one that opts for the verses that encourage tolerance toward other believers, and one that prefers the verses that encourage conflict. Both readings are legitimate."
Thus, acts of violence carried out to advance the Christian faith are the extreme exception to the rule. Acts of violence carried out to advance the Islamic faith are all too common.
When it comes to freedom of religion, a country like America, founded on Judeo-Christian principles, has allowed this essential liberty from the start.
And in a country like England, which also has a rich Christian history (despite its current backslidden state), Muslims can practice their religions freely, even proselytizing non-Muslims.
In contrast, if Muslims became the majority religion in England, non-Muslims would become second-class citizens, with limited freedoms (like Christians in Pakistan), unless they converted to Islam.
It is true that both faiths seek to spread their message by disseminating information. And both faiths point to the sublime message of their founders.
But the message of Jesus leads to liberation while the message of Muhammad leads to subjugation.
Again, I know there are moderate Muslims who seek to reform their faith, and many of them are honorable people. And I know that some of them believe they are being true to the real spirit of their faith.
But there's a reason that, generally speaking, true Christians are persecuted by true Muslims rather than true Muslims persecuted by true Christians.
It is the difference between the cross and the sword.
Originally published at AskDrBrown.org - reposted with permission.