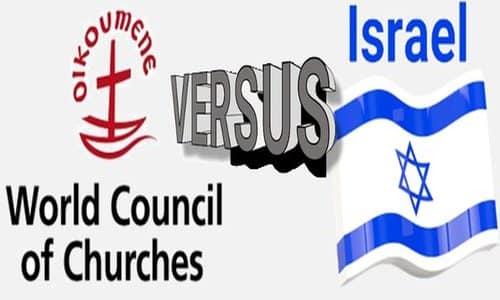 By Ben Cohen/Algemeiner.com July 26, 2017
Share this article:
The World Council of Churches (WCC) has declared its support for the Palestinian campaign against Israeli control of Jerusalem's holy sites, describing new Israeli security measures at the Temple Mount as a "corrosive act in the midst of an already-fragile peace."
"Keeping the historical status quo and supporting equal rights for Christians, Muslims and Jews at these holy sites is vitally important to maintaining peace and de-escalating violence," said Fr. Ioan Sauca, acting general secretary of the WCC.
"Denying access to holy sites for thousands of people who have traveled far to pray is not only a violation of the rights of those individuals, but also a corrosive act in the midst of an already-fragile peace," Fr. Sauca said.
One prominent Jewish human rights group ridiculed the WCC for protesting against Israel's installation of metal detectors at the site, when such measures are common at religious sites around the world.
In 2015, Saudi Arabia introduced a range of new restrictions, including electronic bracelets, for Muslims performing the Hajj pilgrimage to Mecca after capturing a suicide bomber who planned to attack the Grand Mosque in Islam's holiest city.
Major Christian sites, most obviously at the Vatican in Rome, have also implemented enhanced measures amid a continuing wave of Islamist terror attacks in Europe and the Middle East.
"The installation of metal detectors is taken for granted at the Vatican, at government offices, at every airport around the globe," said Rabbi Yitzchok Adlerstein - Director of Interfaith Affairs at the Simon Wiesenthal Center (SWC). "They were first made necessary when Palestinians internationalized terrorism decades ago."
A statement from the SWC argued: "If the WCC's call to maintain the 'status quo', i.e. free access without metal detectors, is heeded, it will be complicit in the shedding of blood in the future.
If the WCC is truly interested in protecting the rights of all the prayers, they should denounce extremist protests and threats made against Istanbul's leading synagogue, which has suffered two previous terrorist attacks."
The WCC's attitude to Israel has been consistently hostile for several decades. The organization has a deliberately vague policy towards the BDS campaign targeting Israel, saying it does not support a boycott, but endorsing at the same time "all non-violent efforts to end the occupation (including considering appropriate economic and other measures)."
[NewsMax2
The WCC is a central promoter of the Christian "Kairos Palestine" document, which characterizes terrorist acts of "armed resistance" as "Palestinian legal resistance," denies the Jewish historical connection to Israel in theological terms, calls to mobilize churches worldwide in the call for BDS, and compares Israel with the South African apartheid regime.
According to the Israeli research institute NGO Monitor, the WCC directly funds groups in its "Israel/Palestine" network that promote BDS and "lawfare" campaigns to convict Israeli political and military leaders for alleged "war crimes."
Originally published at Algemeiner.com - reposted with permission.