After Syria Civil War Ends, Guns Will Be Turned on Israel 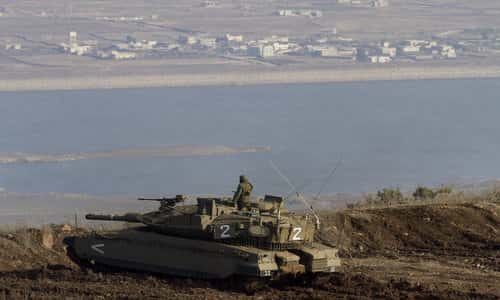 By Barney Breen-Portnoy/Algemeiner.com October 23, 2017
Share this article:
Residents of Israel's Golan Heights region are on edge following the latest exchange of fire on the border with Syria.
Early Saturday morning, five rockets were launched from Syria into Israel, hitting open areas, causing no injuries or damage. This prompted an IDF strike later in the day on three Syrian artillery pieces.
"Whether errant or not, any future occurrences will force the IDF to intensify its response," the IDF said. "The IDF holds the Syrian regime responsible and won't tolerate any attempt to breach Israeli sovereignty or threaten Israeli civilians' safety."

Eli Malka -- the head of the Golan Regional Council -- told the Hebrew news site nrg, "I hope that the clear response of the IDF will stop the shooting, but we are preparing for any potential escalation."
Since the civil war in Syria erupted in 2011, Israel has largely sought to remain neutral in the bloody conflict, which has drawn in many regional players.
However, the IDF has responded with pinpoint strikes to occasional cross-border fire -- both errant and deliberate -- in the Golan Heights and has reportedly targeted a number of Hezbollah-bound weapons convoys in Syria in recent years.
Israel has also provided medical treatment to thousands of people wounded in the fighting in Syria.
According to nrg, IDF officials believe Saturday's rocket salvo was intentionally aimed at Israel and ordered by Syrian President Bashar Assad's regime.
Assad may feel that victory in the civil war is within his reach thanks to having Tehran by his side, along with Shiite militias from Iraq, Pakistan and Afghanistan, and 8,000 well-armed Hezbollah fighters. So maybe he considers this a good time to send Israel a defiant message.

It doesn't hurt that the same day, Iranian defense chief Mahmoud Bagheri signed a memorandum of understanding with his Syrian counterpart, Ali Ayyoub.
"These were not mortars or artillery shells, but rockets that struck our territory," an unnamed IDF Northern Command officer was quoted as saying by nrg. "The chance this was not deliberate is low.
There were no battles taking place in the area where the launch took place. This very well may have been a message from Syria. Our main concern now is that this doesn't become routine, because we've already seen this sector heating up since March."
For Malka, it did not matter whether the fire was directed at Israel on purpose or not. "A bomb is a bomb," he said.
As Assad -- aided by Russia and Iran -- has gained strength over the past year, Malka added, authorities on the Golan Heights have been preparing for an end of the relative quiet that has prevailed in the area.
"After the civil war in Syria dies out, the guns will be turned on Israel," he predicted.

Zionist Union MK Eyal Ben-Reuven, a retired IDF general whose service included a stint as deputy Northern Command chief, told nrg that Iran -- the patron of Hezbollah and other Shia militias operating in Syria -- had "an unequivocal interest in heating up the border."
"The real landlord in Syria, the Russians, cannot stop this, and the Americans are not there," he said. Therefore, he warned, there was a possibility of a "significant escalation" in the north.
For now, at least, it doesn't seem there is anybody who can stop the spread of Iran's influence in the region.
Russia may be willing to turn a blind eye to the next Israeli airstrike, but that won't torpedo Iran's plan for Syria, which includes a broad and lasting military presence.
Originally published at Algemeiner.com - reposted with permission.