Worship The State Or Jesus: Chinese Christians Under Pressure 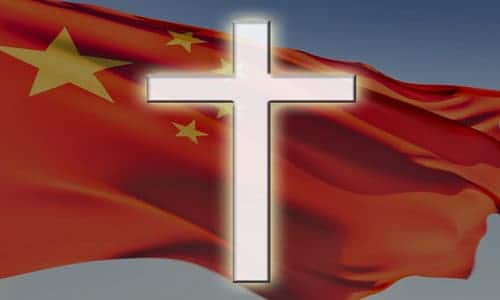 By PNW Staff January 11, 2018
Share this article:
Many Christians in the United States and around the world feel free to put up Christian symbols, such as crosses, scripture passages, and pictures of Jesus, inside and outside their homes.
Christians in Southeastern China, however, were recently told by state officials to take down these images and symbols.   Instead, they were given posters of President Xi Jinping to display.
Most of them complied since, in impoverished rural areas, they feared the loss of government support.

In another incident in 2015, over 1,200 crosses were torn down from church buildings in Zhejiang Province and hundreds of house church leaders were arrested.  "Many rural people are ignorant," said one official.  "They think God is their Savior."  The Communist Party prefers that people look to the state for help.
It appears that the Communist Party in China is gearing up to crack down on Christians who are independent of the state-sanctioned church.
Since the majority of Chinese Christians operate in underground "house churches" outside of government control, officials are concerned that these groups could create negative views of the Party.
The state-approved church, sometimes known as the "Three Self Church" in connection with China's Three Self Patriotic Movement, does not allow complete freedom of worship.

For instance, Wu Weiqing, pastor of Haidian Church in Beijing, has said, "We have to remember first of all we are a citizen of this country.  And we are a citizen of the Kingdom of God. That comes second."   For most Christians, that philosophy is contrary to true faith.
A new law is scheduled to take effect on February 2 that will prohibit unofficial religious bodies from teaching children, receiving donations and posting information online.  Government officials say that they are concerned about "extremist thought."
Some observers are predicting that China will soon contain the largest Christian population of any other nation.   Christians already outnumber members of the Communist Party.  But Xi Jinping has said that Party members themselves "should be firm Marxist atheists and must never find their values and beliefs in any religion."
In addition, he has said that China's youth should "believe in science, study science, spread science, and... have a correct worldview.”

Although the Communist Party in China is reluctant to face worldwide criticism, they are clearly drawing lines that could create conflict. Church leaders would do well to keep a close watch on these developments.
Not long ago, a pastor gave an impassioned plea for the persecuted church in China, that God would grant them freedom and liberty to worship. After the service, he was approached by a Chinese national who happened to be visiting that day.
He thanked him for his concern but, said he, in China we do not pray for political change or relief from persecution. Rather, we pray that God will give us grace to endure and to glorify His Name.  How many western Christians would be so bold in their faith?